The longest cycle bridge of South-Holland. That’s how the media introduced the brand new 600 meter (1968.5ft) long cycle bridge that was opened on 26th October last. It connects the town of Spijkenisse to the Rotterdam Port area to the north. Building had started in April 2010 and this new bridge cost 21 million euros. It was paid for by the “stadsregio” (Rotterdam metropolitan area) and the province of South-Holland.

The cycle bridge is called Hartelfietsbrug (Hartel cycle bridge) because it crosses the Hartelkanaal (Hartel canal). A spokesperson called the new bridge a big improvement for cyclists because it makes cycling more convenient and safer since this bridge puts cyclists further away from car traffic than the original separated cycle path right next to the busy road on the existing bridge did.

But he is also crystal clear about another reason, which is that the road for motorised traffic has to be widened from three lanes (two single lanes and one alternate lane) to a road with four lanes (two lanes in each direction). Because the road cannot handle the increasing motorised traffic. Removing the cycle path from the existing bridge gives exactly enough room for the extra lane.

To a cynic or someone with a ‘glass-half-empty-mentality’ this could be seen as “proof” that the Dutch are actually car-centric and that all they want is ‘getting cyclists out of the way of car traffic’. But is that really how you should see this?

Well no of course not. What you see here is how the integral transport approach in the Netherlands works. The goal of the approach is to make transportation in a region possible. Transportation has to be understood in the broadest sense of the word. Cycling is one part of it and so are public transport, professional transport and private motorised transport. If there is a problematic bottleneck in one part of the system (local) governments will look for a solution in the entire system. Improving cycling conditions can lead to less congestion so Dutch authorities do indeed build cycling infrastructure to decrease (motor)traffic congestion. Just this week a network between Rotterdam, Delft and some smaller municipalities was finished. This network of 15 kilometers (9 miles) of new fast convenient and safe cycle paths, with 12 new bicycle tunnels, was built “to reduce congestion on the roads and to contribute to a better health for the people of the province of South-Holland“. See article (quirky Google translation).

In this case it was thought best to build a new cycle bridge and use the room on the old bridge for the expansion of the road. Earlier I showed you an example where motorised traffic was diverted and more room for public transport and cycling was created. 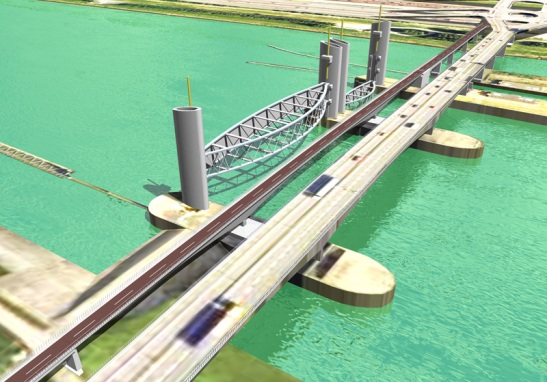 Hartelfietsbrug in between the storm surge barrier and the bridge for motorised traffic.

Hartelfietsbrug does not look very spectacular but looks deceive. It was built in between the car bridge and a storm surge barrier. Because of the latter it was impossible to drill a foundation so the bridge was screwed on and glued to that storm surge barrier. This had never been done on such a large scale.

To reach this bridge I had to cycle from the nearest railway station. Which was in Vlaardingen-Oost, about 12 kilometers away. The ride took me through the Beneluxtunnel of which you could see my video earlier. The ride took me also through the large Rotterdam port area with all the petrochemical industry. It is interesting that the large oil refineries can be reached by good cycle infrastructure. Even though it was the middle of the day so there are not many people underway, I did see some employees arrive to and leave from their work at those oil refineries by bicycle! The area is not very scenic to say the least. But I filmed the full 25 kilometer (15.5m) ride and you can see it at ten times the original speed.

The province of South-Holland opened a website about this bicycle bridge. (Dutch but Google Translate does a good job here).

This post, written by me, was first published on a different platform.

Hi i am always impress how dutch all the time are Improving all the cyclepaths in all cities. I´am from Bogotá Colombia called a model for so many developed countries for cycling and so many times named after copenhaguen and amsterdam like the third cycling city, and i think we are pretty far away to be one. Yes here is impresive that in a 8 million people almost 6 or 7% of all trips are made by bicycle, but our infrastructures is ineficient despite is the best quiality in america, we have so many challengues but we are improving and making things like this bike tunnel below a Bus rapid System that some people are calling like the more near thing we ahve similar to dutch standars. i hope we still work in this path that is complicated but can be done. http://www.youtube.com/watch?v=0lw27h2F8WM&feature=youtu.be

I have crossed the old bikepath on this bridge and when you go over it you really wonder why they complain in groningen about the berlage bridge. The bridge over the Hartelkanaal is steep!