Bicycle parking restrictions in the Netherlands

With a bike share of transportation that is unique in the world come “problems” that are equally unique. At least some municipalities in the Netherlands see a problem in the high number of ‘illegally’ parked bicycles around popular destinations in their towns and cities.

Poster to announce the parking restrictions around Leidseplein in Amsterdam: “Work with us! Park your bike okay”

Two weeks ago Amsterdam announced the start of a campaign with a stricter enforcement of bicycle parking restrictions around Leidseplein. To “tidy up” this central square that has a number of theaters and a very high number of bars and restaurants. According to the city they all support the campaign.

In principle, parking your bicycle on the public roads is permitted everywhere in the Netherlands under the road act from 1994. A municipality can however designate specific areas where restrictions are in force. They can either be restrictions in time of parking that is allowed (ranging from 30 minutes to 28 days) or that bicycles can only be parked in specific parking racks or areas. Cyclists that leave their bicycles for too long or outside the racks risk confiscation by the local government. Mostly the bike can be retrieved for a small fee.

More municipalities have taken measures for so-called concentration areas. High on the list of popular destinations are railway stations. With 40% of the train travelers arriving by bicycle the stations in the Netherlands have huge problems with the number of parked bikes. The four-story parking facility in front of Amsterdam Central station may be the most photographed facility in the Netherlands. It was meant to be temporary. So are the ships behind the same station where there are thousands of bikes to be seen as well. I have shown you this in an earlier video. Utrecht has the largest train-station in the Netherlands and will need to have 23,000 parking spaces after the remodeling of the station area is finished. Until then over 800 meters of bike racks on the streets and a number of temporary facilities prove to be inadequate. Other stations like the ones in Assen and Rotterdam also have regulations and no-parking zones near the train station. At least, outside the racks (see pictures).

Another very popular destination in many Dutch cities is the inner city pedestrianized shopping area. Tilburg is one of the cities that banned on street bicycle parking there, but had a hard time enforcing the rules. There is a huge free underground bicycle parking facility but people still parked on the streets closer to the shops. So last year the city tried to bring in humor to get people to obey the rules. As is clear from the video, not everybody understood this campaign with a barking tricycle.

Not everybody understands why the municipalities are banning parking bicycles at all. You would expect the local governments to be happy that people didn’t arrive to those destinations by car, and try to keep it that way by creating adequate facilities. In 2010 Fietsersbond (Cyclists’ Union) investigated the situation of 1600 popular destinations in 43 municipalities and found a huge shortage of bicycle parking racks. For 80% of the train stations parking facilities were not sufficient. And for main shopping areas that was the case in 70%. Instead of banning bicycle parking municipalities should invest in more bike racks. After all, a row of neatly parked bicycles looks ‘tidy’ enough. Restricting bicycle parking at popular destinations could lead to a decrease in the use of bicycles and surely nobody would want them replaced by parked cars!

No parking sign in Utrecht. With the additional warning “bicycles will be removed”. Most cyclists do not seem to be bothered by this restriction, even attaching their bikes to the no parking sign itself…

Warning label in Utrecht stating: Attention! It is not permitted to park longer than 28 days in a rack or your bike will be removed at your expenses.” This to free racks from abandoned bicycles and thus to create more free parking spaces. 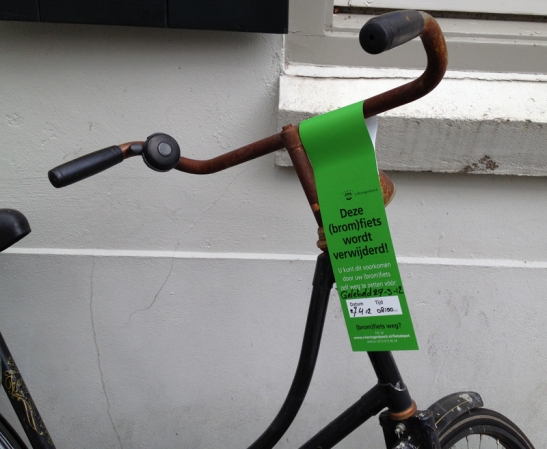 A labeled bike in ‘s-Hertogenbosch informing the owner: “This bike will be removed! You can avoid confiscation if you remove this bike yourself before 27 April 2012 8:00am, labelled on 29 March 2012”.

A city worker of ‘s-Hertogenbosch accompanied by a police officer uploads bicycles that were parked illegally.

One of the strangest side effects of these policies is the fact that bicycle thieves now allegedly dress up as city workers and steal high quantities of bicycles at the time. All the more reason to think long and good about these policies you would think. It is time Dutch cities see this as it is: it is great that so many people use their bikes, it would be wise to create good parking facilities for them.

9 comments on “Bicycle parking restrictions in the Netherlands”

This entry was posted on 2 April 2012 by Bicycle Dutch in Original posts and tagged Amsterdam, cycle parking, NL is not perfect, restrictions, Tilburg.