When a viaduct that sees 22,000 cyclists a day has to be replaced by a bridge you have a big task to make a detour for all these people cycling. Utrecht had this big task and did a really good job. 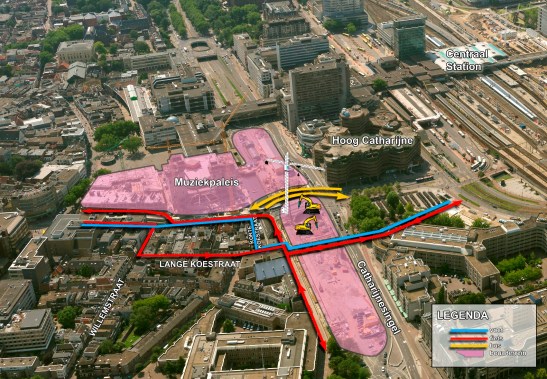 The detour in the information flyer that the city issued. The red lines show the cycle detour, the yellow lines indicate the location of the original viaduct that will be replaced by a bridge.

This bridge is part of a large project to update the 1970s station area. I’ve shown you some of the works before. Because of the return of the old city moat, the viaduct over the already removed 1970s freeway must become a bridge again. To make demolition and rebuilding possible a new crossing of the building site, about 100 meters from the old viaduct was recently opened (31 may 2012). The detour will have to exist for at least one and a half years. The time it will take to finish the new bridge.

The video shows the area and how the detour goes through it.

The temporary crossing of the building site (the future water) as seen by a webcam to follow the building activities.

On the very first morning of the opening of the detour I placed my camera on a tripod in front of the building on the left side of the above picture and pointed to the crossing. I filmed for 10 minutes and compressed those ten minutes back into two.

The new bridge will be at about the same location of the bridge that was there until the 1970s. Below a picture with four stages of this site.

In 1950 it was still a real bridge over the old city moat. By the 1970s that had been replaced by a viaduct over a 6 lane freeway as can be seen on the 1991 picture. Most of the buildings were replaced too. By 2011 the freeway was gone and works are going on to work towards the situation which can be seen on the rendering showing the 2018 situation. Interesting to see that the parking lot from 1950 was a park with water in 1991 and a bicycle parking lot in 2011. In the 2018 situation there is water again at that spot. That water belongs there because until the 1930s this was Utrecht’s port!

Finally a close up of the bridges that are being constructed. Note that they will not be open to private motorised vehicles! Only buses. The only car lanes are planned in the right, in gray along the new city moat, not crossing it. There is one diagonal bridge for buses, pedestrians and cyclists and one in the spot of the original bridge that is only for pedestrians and bicycles.

A close up of the new bridge complex. Note that it is only for buses, bicycles and pedestrians, not for private motorised traffic. The truck in the bottom left is entering a tunnel into the city’s new music theater.

10 comments on “The big detour – Utrecht”