It can sometimes be incredibly enlightening to look into the past. The following is from a 77 year old Dutch newspaper article. If you look past the old-fashioned language and paragraph-long sentences, the message in this article is strangely up-to-date. With the ongoing “Love London, Go Dutch” campaign, it could almost have been written yesterday. It is interesting to know that neither the Netherlands nor Britain have changed their way of thinking about traffic in 77 years. I leave it up to you to decide what that might mean for the future of cycling in the United Kingdom. The translation below is mine* and it was not easy to translate the extremely old-fashioned Dutch. It is not the full article, but a very large portion of it. There were no pictures in the original article.

From the Dutch Newspaper “Algemeen Handelsblad” of 17th March 1935, an incredibly up-to-date article.

One of the traffic arrangements of which our country [the Netherlands] can be particularly proud, is the dense network of cycle paths that criss-cross our provinces. No other country has started earlier with such an elaborate and systematic construction of special roadways for cycle traffic. What we have achieved in this country, especially owing to the untiring efforts of ANWB**, commands admiration from compatriot and foreigner alike.

The fact that we are writing about cycle paths particularly at this moment, has two reasons. The first is that people abroad – especially on the other side of the Channel – presently exhibit a more than average interest to study the system of cycle traffic in the Netherlands.

Currently, British debates about cycle traffic have been intense, dealing with the question whether it would be desirable or not to accommodate newly constructed high speed roads with separated tracks for cyclists. In this matter one would understandably like to emulate the practical experiences of those countries in which people cycle most: Denmark, Belgium and above all our country [the Netherlands]. A traffic specialist from the British Empire recently shared with us that the surveys which his compatriots had conducted with regard to this question, had not presented a clear answer yet. Specifically regarding the Netherlands, they had collected both opinions of spokespersons who commended our network of cycle paths, and who assured that the number of traffic accidents has undoubtedly been reduced because of the existence of these paths, as well as expressions of people who were dissatisfied with the system. In their opinion the cycle paths are often more poorly paved than the main carriage ways right next to it, resulting in cyclists who prefer to ride with the faster traffic on the carriage way and who, by acting in such manner, endanger both themselves as well as cars.

Therefore, the issue is well worth a further examination. And if we now limit ourselves to both countries: the Netherlands and England, we first and foremost need a short overview of how the development of the construction of cycling infrastructure in both countries has evolved, for a better understanding.

That cyclists need their own protected place on the roads was a no-brainer in the Netherlands, as early as the 1930s.

With regard to cycling traffic, our country has taken a position like no other. We have over eight million inhabitants and 2,940,000 bicycles. That amounts to one bicycle for every 2.7 inhabitants. The traffic counts for 1932 have shown that of all traffic on national highways 50% is that of cyclists. In such a situation it can be considered important, not only for cyclists, but also for other road users, that cyclists have their own roadways, the cycle paths, as much as possible.

The Netherlands belong to the first countries where the construction of paths designated exclusively for bicycles was initiated. The cycle paths can be divided into two groups: paths situated alongside carriage ways designated for other traffic or those which form a part of such roads [cycle lanes] and the so-called completely separated cycle paths that are totally independent of the roads for motorised traffic.

With regard to England: that country does not really have many cycle paths yet. Only recently the present minister of traffic, the active mr Hore Belisha, had initiated a decent study into this subject, of which the aforementioned discussions are also a result. Because separating pedestrians and other road traffic, both driving and riding road users, is one of the first principles with which the design of modern roads should start, and a modernisation of the English road network is now taken up with vigour, the question of the construction of cycle paths has become pressing. In the ‘five year plan’ which the English government has planned to propose, it can be expected that the construction of a considerable number of cycle paths will be included.

Recently the Minister has personally opened a double cycle path along the Western Avenue, from Paddington to the road from London to Oxford. The paths are 2.5 meters wide and can be found on either side of the carriage way and have a concrete surface. The construction costs for a length of 4.5 km amounted to £ 7,000.=. 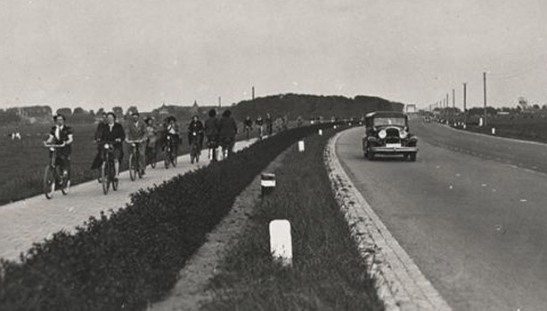 In the 1930s all newly constructed main country roads in the Netherlands were built including separated cycle paths, there was no debate about the necessity for such infrastructure.

A peculiar phenomenon has to be, to us Dutch, that the English cyclists form a more or less hostile conviction towards these cycle paths alongside the main highways. Many have the opinion that they have a right to be using the main carriage way, and they feel more or less deprived when they are “repelled” to the cycle paths.

That concludes the facts of this matter. Our conclusion about this subject is the following: cyclists belong by no means on the carriage ways for modern fast moving traffic. In this country we unfortunately still have a number of roads that do not have a marked cycle path. The numerous accidents on such roads, especially at night, where cyclists become victims, speak volumes. Their safety may be somewhat improved, when the requirement of a red reflector would not be the only requirement, but that besides that, either a back light or a white painted rear fender would be mandatory on bicycles. But this measure can also never be enough.

Slow traffic, which includes cyclists, must remain separated from the carriage ways on which cars move. Construction and maintenance of cycle paths is therefore an inevitable prerequisite.

If cycle paths have to completely fulfill their purpose, then it is necessary that they are either constructed on both sides of a road, or that they are wide enough for cycling traffic in two directions and that the surface is adequate. For our modern paths with a concrete or tiled surface, that is most definitely the case.

When it comes to the question in how far newly constructed roads should be accommodated with cycle paths one must take into account the different characteristics of intercommunal motorised traffic, that has an obvious long distance character and that of the cyclists that consists of partly traffic for recreational reasons and partly intercommunal traffic over relatively shorter distances. For the recreational cyclist the completely separated cycle paths that wind through places with the most beautiful scenery are most important. For the other category there has to be the opportunity to make one’s way from a certain place to the surrounding towns and villages. When high speed roads serve this same goal they would have to be provided with cycle paths, unless a completely separated cycle path already serves this same route with not too many detours.

Here, for cyclists, the benefits will always outweigh the costs, because cycle paths can be constructed for a relatively low and justifiable increase in the costs, that has to be added to the costs for the construction of a new road.

Another factor that justifies these extra costs is the intensity of the cycle traffic in the Netherlands, which can by no means be seen as similar to larger and a lot less “cycle enthusiastic” countries like Italy or France. That what is right for the Netherlands does not necessarily have to be the right solution for a country like England, where the traffic situation and the geographic situation are yet again completely different.

Every country should decide these things for themselves, taking into consideration the local situation, population density, the presence of too steep terrain for cyclists etc. Internationally valid rules of conduct for the construction of cycle paths can in our firm opinion not be given.”

* With valued help of MvW in A!

**ANWB today is the Dutch Motorists / Touring club, but it evolved from a Cycling, Tourism and Touring Club and in that capacity it was a big force behind the construction of especially totally separate cycle routes in the early 20th century.

The Netherlands has kept this way of thinking about cycle paths alongside country roads. But after cycling decreased dramatically in the 1960s and 1970s these policies were also implemented in the cities and towns from the late 1970s on. More on that in my post ‘How the Dutch got their (city) cycle paths“. More from the English side of this story and the implications for today can be found in this blog post on the Vole O’speed blog.

This entry was posted on 2 July 2012 by Bicycle Dutch in Original posts and tagged cycle paths, history, infrastructure, United Kingdom.