Cycling “in the Dutch Mountains”

“Flat as a pancake” is the phrase often used to describe the Dutch landscape. That is correct for a large part of the country, certainly for the provinces North and South-Holland, but in the Center, the East and the South-East of the Netherlands there are some quite hilly parts. A number of the hills have grades of over 10%. Sports cyclists on their light race bikes go there to practice cycling in more hilly terrain. But you can also see locals cycling there on the typical heavy upright Dutch bicycles. If you look carefully though, some are actually e-bikes. Very practical!

The area I visited for this blog post is around the village of Berg en Dal (“Mountain and Valley”) situated near the German border just South-East of Nijmegen. The steepest hill there has a grade of 11.8% but I only found a sign of 10%.

Officially the wrong sign (this would mean uphill not downhill) but there really is a 10% slope downhill here.

As you will see in the video I managed to ride a speed of 29km/h downhill, in a 30km/h (18mph) zone on my single speed heavy rental bike with coaster brakes. One hand on the handle bars, the other holding the camera. But even if I had ridden more than the speed limit I would have stayed on the right side of the law: speed limits in the Netherlands only apply to motorised vehicles, never to human powered vehicles like bicycles.

Cycling up and down hills in the Netherlands. Music: ‘In the Dutch mountains” by the Nits.

I have fond memories of this area of the Netherlands. As a 12 year old boy-scout I cycled here all the way from Utrecht (an almost 200km/125miles round trip) to summer camp. During the camp week we specifically went to this particular area to experience what it was like to cycle in hills. I remember I had to dismount, because even with my three hub gears I couldn’t get up the – in my eyes – mountain. Surprise surprise, 34 years on I still couldn’t conquer the hill (with the added difficulty of a rental bike with no gears at all…). 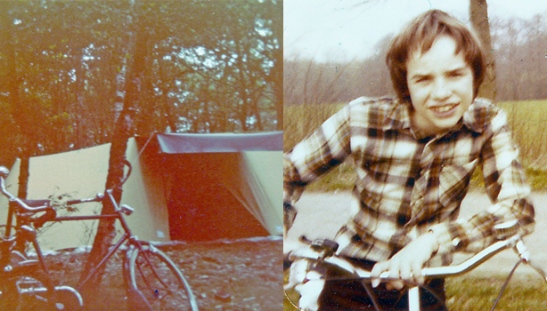 Left; some of the bikes in front of the tent for boy-scouts summer camp in the area near Nijmegen in 1978. Right; as you can see from another picture from that time I already had a three hub gear bike with hand-operated rim-brakes as opposed to the (in that time) more common single speed, coaster brake bikes.

This area has always been very attractive to Dutch tourists. Especially when it was opened up with the construction of an 8 kilometer electric tram line from Nijmegen. From 1913 this tram transported tourists to Berg en Dal in 24 minutes. 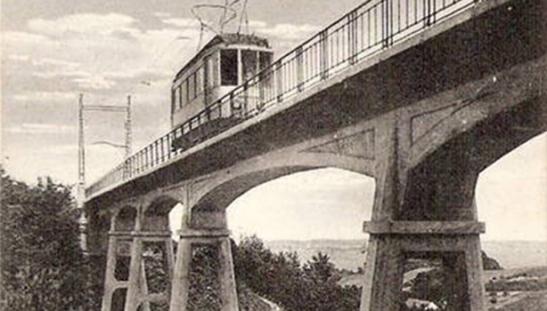 Mountain bridge in Berg en Dal for the tram line that was in operation from 1913 to 1955.

The line was know as “Bergspoor” (Mountain track) especially because there was an 85 meter (279Ft) long bridge over a valley 20 meters (65Ft) below it, near the end destination. This was unique in the Netherlands. The tram line stopped operating in 1955, which had everything to do with the upcoming ownership and use of private cars, and the bridge was destroyed in 1969. In my video you can see a remaining tram stop shelter at 2:16 and the sub power station for the tram line opposite it at 2:22.

There are of course no real mountains in the Netherlands but the Dutch do know what cycling up and down hills means. In general they consider it a lot easier than riding on the far more ordinary flat terrain against the fierce Dutch winds! Because in hills there is always the going down part, but the wind is always in your face…

14 comments on “Cycling “in the Dutch Mountains””

This entry was posted on 4 October 2012 by Bicycle Dutch in Original posts and tagged Berg en Dal, hills, Nijmegen.