A more general look at roundabouts

There was some confusion in the United Kingdom about ‘Dutch style roundabouts’ now that two different developments are going on at the same time. On the one hand Transport for London (TfL) has had a life size Dutch test roundabout built for them in the Transport Research Laboratory and on the other hand Bedford plans to build a Dutch ‘Turbo-roundabout’. In the Netherlands these two types of roundabouts are two completely different design solutions for very different situations. To get right to the point: in my opinion the Bedford situation could be very bad for cyclists as they are planning something “Dutch” without the Dutch solution for cyclists. On the other hand the TfL development could be very good for cyclists, because that is a complete Dutch solution translated for the UK. In the boxes below you can read details about the different types of Dutch roundabouts. But first I would like to show you a roundabout in Amsterdam that is a real version of the test roundabout built and tested for TfL. 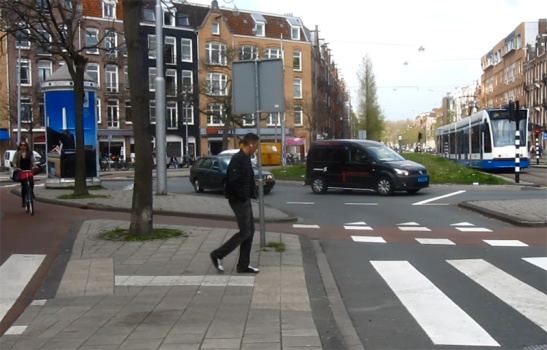 Amsterdam’s modern single lane roundabout (built in 2007). It has a circular separated cycle path all around it with priority for cyclists (over motor traffic but not the tram).

This roundabout can be found in an older neighbourhood of Amsterdam, built shortly after 1900. It was a normal cross roads junction re-designed for the last time in the 1970s. It was traffic lights controlled and there were multiple lanes for motor traffic. There was no separate cycle infra at all. Because the junction was over 30 years old it was due for maintenance. The junction had been a black spot (because in three consecutive years there had been over six accidents with personal injuries), so the city took the opportunity to completely re-design the junction.

The before situation had multiple and wide lanes for motor traffic. Cyclists had to mix with motor traffic. This looks very old fashioned compared to modern Dutch street design.

Neighbourhood residents came up with the idea to build a modern roundabout that would give pedestrians and cyclists priority over motor traffic. At first the city and road designers were skeptical about the implications that would have, but after a lot of thought and elaborate plans for both a roundabout and a cross roads junction (so the consequences for both could be compared well) Amsterdam decided it wanted to build the first roundabout with a tram track.

A multiple-lane traffic controlled junction without protected cycle infrastructure. This picture from the 1980s shows the situation that existed before the 2007 reconstruction. Another example shows how cyclists had to share to road with trucks.

It wasn’t legally possible to give the tram priority on the tracks cutting through this roundabout. But a solution was found in traffic lights for the tram. These are only red lights that stop all traffic when a tram approaches. Making it officially a “rail road crossing”.  Once the tram has passed, the lights go out and it becomes a ‘normal’ roundabout again.

The roundabout was constructed in 2007. At the same time all the streets leading to the roundabout were reconstructed and they got separated cycle paths as well. As is usual in the Netherlands, this was combined with a renewal of the sewer pipes, water works and cables. Right from the beginning people using the roundabout were generally pleased with it. Compared to the junction with traffic lights, traffic seemed to flow a lot faster. In 2011 a survey showed that people in Amsterdam named this particular junction as one of only few in the city where they thought safety had improved considerably. So the roundabout can be called a success. The only remaining complaint is that sometimes cyclists are not given the right of way by motor traffic.

But because of the design, the speed of motor traffic is reduced to an almost equal speed as that of cyclists. This makes negotiating the right of way a lot easier. In the video you can see that traffic flows very smoothly and motor traffic and cyclists really take turns. Cyclists sometimes even adjust their speed so they can just pass in front of a motor vehicle, or right behind it. The Dutch generally don’t like to come to a full stand still and they try to make sure that others don’t have to stop either. This type of junction makes that possible in a safe way, even with high volumes of very different types of traffic. Trucks, buses, cars, scooters, pedestrians and cyclists interact in a safe way and the traffic flow is very high even though the speeds are relatively low.

The video explains how the modern Amsterdam roundabout, with considerable traffic volumes, works.

Hierarchy in the right of way

The tram excepted, the rest of the priority is organised as follows:

View from the saddle. Four left turns and going straight-on the fifth time.

In an earlier post I had already shown you this type of roundabout, but the Amsterdam roundabout is an example in a more urban setting.

A turbo-roundabout is usually several lanes wide and has a very special spiral shape. The aim of turbo-roundabouts is to get the traffic flow into a higher speed. For that reason it has been made impossible to change lanes on the roundabout itself with a physical division between the lanes. Sometimes with only a narrow divider, but sometimes simply by (a lot of) space. This eliminates weaving conflicts and that makes that traffic can flow very fast. That high-speed motor traffic makes cycling on such roundabouts impossible. So in the Dutch situation a turbo-roundabout always has separate cycling infrastructure at some distance, often grade separated. Sometimes, on level crossings, cyclists have to give way to motor traffic entering and leaving the roundabout. Because of the high speeds and the multiple lanes, that can be a difficult undertaking. The Dutch Cyclists’ Union is therefore not happy with turbo-roundabouts combined with at-grade crossings, especially in the built-up area. One such Turbo-roundabout in Eindhoven is notorious. The turbo-roundabout proposed in Bedford doesn’t even have separate cycling infra! Cyclists are expected to use the roundabout. Given the fact that due to the dividers and the narrow lanes, traffic is unable to overtake cyclists, that is a recipe for disaster! 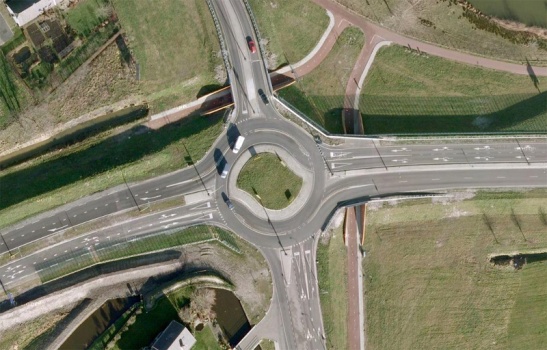 Small Dutch Turbo Roundabout. Clearly visible are the grade separated bicycle crossings on two sides. Turbo roundabouts are not suited for cycle traffic. The high speeds also make at grade crossings, even at some distance, dangerous.

Large Dutch Turbo Roundabout. Clearly visible is the grade separated cycle crossing to the left. The spiral shape makes that there is a separate route for traffic for each possible direction. Drivers cannot change their direction once they are on the roundabout. Traffic chooses a direction before it gets to the roundabout.

‘Ordinary’ Roundabout (without priority for cyclists)

Normal roundabouts in the Netherlands are usually only one lane wide. They are kept small, so the radius is tight. That decreases speeds. When they are built outside the built-up area cyclists do not have priority. Cyclists cross the entrances and exits at some distance. That is easier because of the low speeds and because of the fact that cyclists only have to cross one lane at the time. To make clear cyclists do not have priority, the shape of the cycle tracks is not circular. Of course there are also shark-teeth on the surface and give-way signs to also make the priority clear. 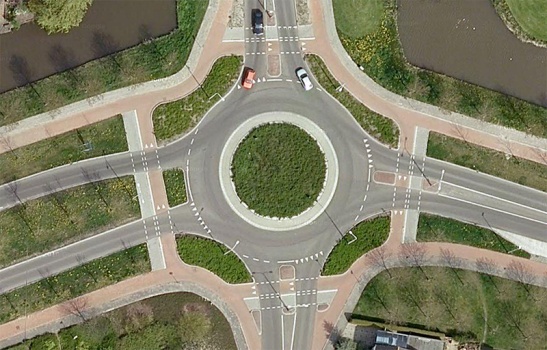 Dutch roundabout without priority for cyclists. The design of the cycle paths is not circular to make that clear. This type is usually seen outside of built-up areas (and in some municipalities that do not comply with the guidelines).

‘Ordinary’ Roundabout (with priority for cyclists)

Dutch roundabout with priority for cyclists on the circular separated cycle path all around the roundabout. This type of design is for the built-up area. This is also the design of the Amsterdam roundabout of the videos in this post and also the design TfL is testing. These roundabouts have existed since 1992 when the first one was built in Enschede.

The flow of all different types of traffic is best observed from one point for a longer time. The bonus video gives you that opportunity. Over 12 minutes in two long segments.

Bonus video: to get a long good look at the traffic flow.

102 comments on “A modern Amsterdam Roundabout”

This entry was posted on 9 May 2013 by Bicycle Dutch in Original posts and tagged Amsterdam, junction design, ride, roundabout.