A ride on a country road… in the city

On a beautiful summer’s day, I filmed a ride on what appears to be a small country road. But this country road is special, it is in the middle of the city.

For ages this country road ran through the fields, but the city expanded and new parts were built north and south of this east west road in the late 1970s. Residential areas to the north and an industrial area to the south. By 1980 the old road was suddenly in the middle of the city.

A country road in the fields in 1956 that was fully surrounded by city from 1980 on. But even in the 2013 situation the country road is still very recognisable and now a recreational cycle route.

When this was still a real country road there were many rural houses on it. The 1970s city planners deliberately kept the road and incorporated it into the city in a kind of city park. Many of the more contemporary houses were destroyed but all the monumental farm houses remained. There were so many of those that the road still has the atmosphere of a country road. 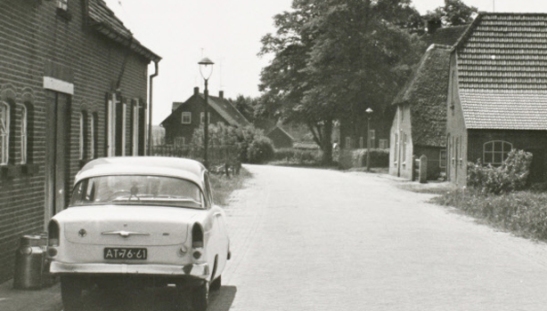 There were many farm houses in the 1960s. Left you can just see a couple of milk churns. Right the more monumental farm buildings and on the left hand side more 1930s-1940s buildings. 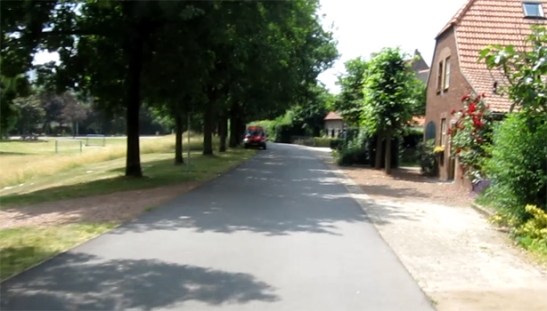 The same location today shows only the monumental farm houses remained, but they still give the route a country road feeling. From the left hand side of the road all buildings were demolished and replaced by a city park.

Motor traffic got new routes in the city expansion. This old road was not supposed to function as a short cut, so the access for motor traffic had to be restricted. All the remaining buildings can still be reached by motor traffic, but now usually only from one end. Since the original road was on a dike, and so elevated in the landscape, it was easy to create overpasses where the old country road crosses the new roads in the former lower lying fields. Three viaducts, only accessible for bicycles, make sure the route cannot be used as a through route any more. The down graded country road is now part of the recreational cycle route network.

A ride on a country road… in the city. 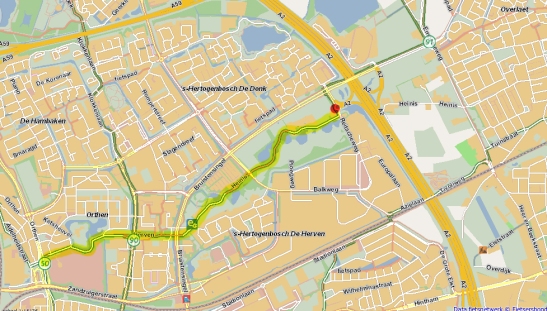 The map with recreational cycle routes from the Cyclists’ Union reveals how deep in the city this old country road really is. The part shown in the video is from the red dot via junction 90 to junction 50.

We can find his kind of urban planning all over the Netherlands. The city expansions from the 1950s and 1960s were planned with no respect for earlier structures like roads and waterways. Everything was levelled and city planners started with a blank canvas. However, from the 1970s urban planners kept some of the old roads and buildings and especially water ways. They were incorporated with a new function into the new urban developments, usually as routes for walking and cycling in park-like zones. This can only work if the original roads are downgraded and cannot function as short cuts for motor traffic. I know examples in Utrecht (Lunetten) and Houten, but other examples can be found all over the country.

This entry was posted on 30 May 2013 by Bicycle Dutch in Original posts and tagged ’s-Hertogenbosch (Den Bosch), country side, recreational cycling, ride, urban planning.