It was opened on the 13th of July, 1885, the magnificent national museum of the Netherlands; the Rijksmuseum in Amsterdam. And it was festively re-opened on April 13th this year, after an almost 10 year renovation that brought the interior back to the old splendour from under white wash that came with 20st century “modernisations”. But even more important: it has been two months since the underpass for bicycles was re-opened on 13th of May, 2013. 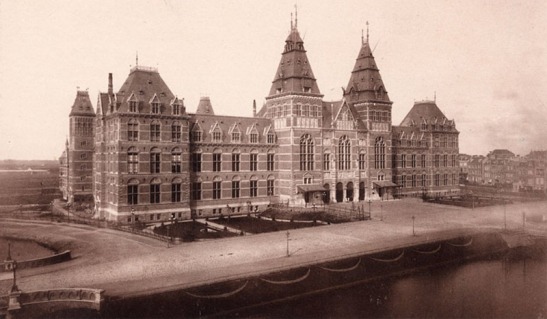 The Amsterdam Rijksmuseum in1885 was then located at the edge of the city.

The Rijksmuseum was built as a national exhibition building mainly to display the paintings of 16th and 17th century Dutch masters. At the time, other architects looked down on it. They called it a ‘medley of styles, with its renaissance-style arches, Neo-Gothic windows and medieval towers, out of step with contemporary life’. Architect Cuypers won a design competition, but even the king despised the building. He called it a catholic cathedral and as a protestant he refused to attend the opening. This controversy resembles the discussions about re-opening the underpass for people on bicycles that culminated late 2012 and continued until the final re-opening this May. The great-grand daughter of the stubborn king, Queen Beatrix, did come for that re-opening, the last museum she would open during her reign.

The plans for the Rijksmuseum reveal the underpass was always part of the museum and it was even designed so it could have trams driving through it.

The underpass was an integral part of the original design. Amsterdam had allowed the building of the museum on the condition that the existing street would remain open to all traffic. It was after all the gateway to the new developments in Amsterdam South. The underpass at street level (often called ‘tunnel’ but it really isn’t that) was wide enough for a tram line. But that was never built. The underpass was open to motor traffic until 1931. The museum director at the time had already been asking for a traffic ban since 1925 but only achieved the compromise that motor traffic would be banned. Consecutive directors tried to turn the central underpass into a main entrance three times, in 1945, 1963 and 1975. But the city refused to give up the vital traffic connection. 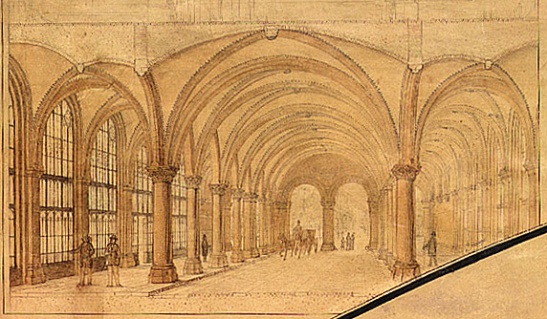 A detail from a larger plan shows the underpass with a horse drawn carriage on the central carriage way and pedestrians to the sides. The central part is now the cycle path.

For the major renovation of this century, the passage was finally closed, temporarily, in 2004. To the surprise of many, the Spanish architect of the renovation brought back the plans to turn the underpass into a main entrance. In 2009 an agreement was reached: there would be two entrances on either side of the bicycle path in the underpass, that would be re-opened. 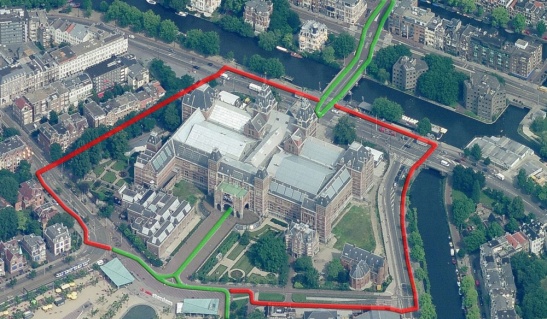 The aerial pictures in Bing Maps were already updated. I added the coloured lines. In green the underpass route and in red the detours that would involve several left turns on large junctions. No wonder that would be a more dangerous route for people.

But then the museum got a new director who tried to change the plans in 2011. He claimed the combination of two entrances and the cycle traffic would be dangerous to the many foreign pedestrians who wouldn’t understand the cycle path there. Amsterdam and its provincial cycle path through the national museum would be ridiculed by the world, he said. The local branch of the Cyclists’ Union disagreed. The city opposed as well, but the local authority (South District) agreed with the museum management. There was a nasty and public fight. There was a report with figures that were wrongly stating it would be safer to have a detour. The director claimed that dealing with the underpass cost him more time than taking care of the paintings and he also tried to make people believe this struggle postponed the re-opening of the museum with several years: ridiculous and false. Proponents of the underpass said the director, coming from Rotterdam, didn’t understand the sentiments of the people in Amsterdam, who love cycling far more than people from Rotterdam. But much more substantial: the Cyclists’ Union was able to prove that the figures used in the opponents’ report were wrong. Cycling through the underpass would be significantly safer for people on bicycles and on foot compared to having people cycling around the museum. The detour would involve left turns on busy intersections and because of the detour cyclists and pedestrians would cross each other’s paths many more times.

There was a court ruling: the underpass would have to be opened. But when the museum was finally re-opened the underpass was not. It was obvious that the management of the museum was trying to postpone and possibly prevent the re-opening even after the court ruling and the decision by the city. But the city then stepped in and demanded the re-opening that finally took place on May 13th. 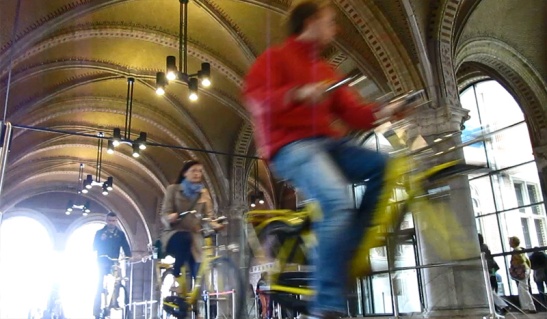 Cycling through the underpass of the Amsterdam Rijksmuseum means you are cycling under Neo-Gothic arches in the style of a catholic cathedral.

I filmed the underpass on the 19th of May when the area was still full of line posts to prevent pedestrians and people on bicycles to interact with each other. These lines have since been removed. Initially the passage had been closed during the weekends, at visitor peak times. But everything runs so smoothly that it was announced yesterday that the underpass will be opened 24 hours a day, 7 days of the week from tomorrow, Friday 19th July, 2013. 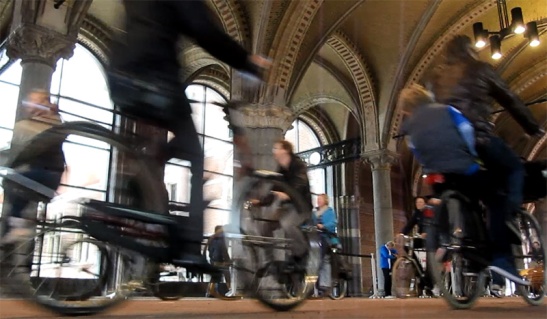 The Rijksmuseum underpass in 2013. Clearly visible are the windows to the atrium with the new main entrance hall.

Earlier this month a news paper had written that two months after the re-opening of the underpass there were no incidents at all and that nothing happened that would have decreased the safety of pedestrians and people on bicycles. The only concern was how to keep mopeds and scooters out of the underpass. For that, South District was now looking for young and unemployed people who could be employed as traffic officers at least until the end of the Summer of 2013.

Newspaper NRC reported on 8th July 2013, that the Rijksmuseum underpass for bicycles has proven to be safe – so far. Only in the headline we see the word “tunnel”, but not in the article itself.

The video shows many happy faces of people cycling through the underpass for the first time or for the first time in many years. It is obvious that many of the people on bicycles are tourists themselves. The identical rental bikes give that away. The world hasn’t ridiculed Amsterdam for its cycle underpass through its National Museum. Far from it: the underpass has become a tourist attraction on its own and many cities in the world would love to have the cycling climate Amsterdam has. 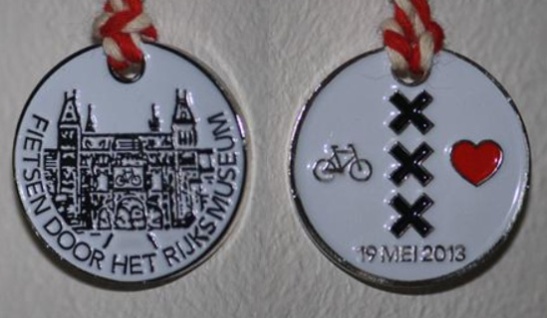 The Amsterdam chapter of the Cyclists’ Union handed out medals to the people cycling through the tunnel on the opening day. But it was on the 13th of May and not the 19th as the medal says. At the front: “Cycling through the Rijksmuseum”. The three crosses at the back are from the city’s crest. So the back really says “Amsterdam loves cycling”.