It seems longer, but only 5 weeks ago I cycled in Brisbane. This was actually the very first time I ever cycled outside of Europe. I have been in the US often, but I never felt the urge to cycle there. I also didn’t cycle in Sydney earlier on this trip, where I did my presentation. That had to do with Australia’s mandatory helmet laws. I do not want to cycle with a helmet, but I also didn’t have the intention to break a country’s law. However, Queensland has several exemption reasons and I complied with one of these. It made cycling possible for me. And I really enjoyed cycling in Brisbane, at least after my first and only encounter with the police, who let me continue my ride, after they had established the legality of my exemption letter. 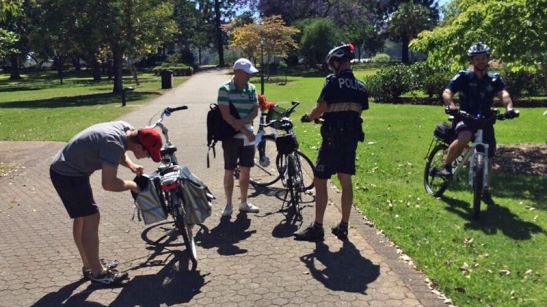 Brisbane police officers stopping me for not wearing a helmet. Only to find out I was legally allowed to do that. Photo by Richard Bean.

My hosts for the tour were Paul Martin and Richard Bean. They showed me the good and some of the bad of cycling in Brisbane. The weather was splendid and the Jacarandas were in full bloom, in short: we had an excellent day! I must explain that although the 7th of October was a Monday, it was a holiday. So the city was much more quiet than it would have been on a normal working day. This made a lot of difference, especially for riding in the cycle lanes. Motor traffic is allowed to drive rather fast in some of Brisbane’s streets. There are a number of different speed limits. In many of the streets in the Central Business District (CBD) the speed limit is 40km/h. But through streets have a limit of 60km/h and that is very fast for multi-lane shared space or if you are in a cycle lane that is only 90cms wide! Especially because drivers tend to see those speed limits as an advisory speed that -they think- may be exceeded by at least 10%. Some streets have a limit of 50km/h and it took an effort to get the city to lower these limits. This letter from the lord mayor shows how the speed limit on a bridge was lowered from 60 to 50km/h after cycling advocates had pointed out the speed limit was higher than usual in the CBD. 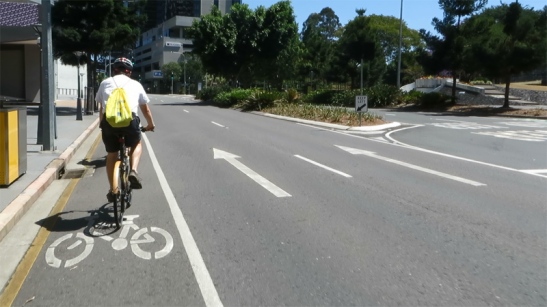 On roads this quiet, a cycle lane like this is okay. But on a normal working day traffic passes you here at high speed and that makes it a completely different experience!

The rate of cycling in Brisbane is very different for different parts of the city. It ranges from 10% to only 1% or less. This has to do with how much infrastructure there is, as Richard recently explained in the Brisbane Times.

“Richard Bean, of the Brisbane CBD Bicycle Users Group, said there was still much work to be done to improve cycling infrastructure in the city’s north-east. ‘The northern bikeways run east-west rather than north-south,’ he said. ‘It won’t be really effective until there is something segregated on the north side, they really need to make something suitable for all ages.’” 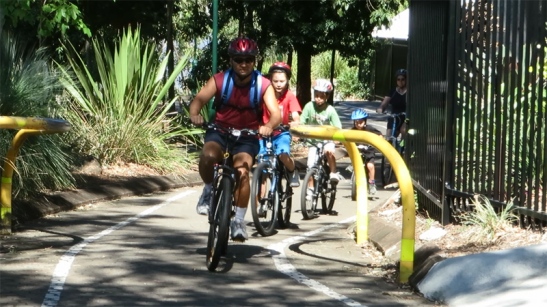 A family of 5 cycling in Brisbane.

That all ages would like to cycle was clear to me from all the people I saw cycling along the river on the beautiful riverside bikeways. Entire families had come to cycle there on that holiday. Even though many of them had obviously arrived by car… At certain points the relatively short Bicentennial Bikeway is up to even the latest Dutch standards! When I asked Paul Martin what he thought of that cycle route, he said: “This is probably the best example of fabulous cycling infrastructure in the whole of Queensland; possibly even the whole country.”

The Bicentennial Bikeway along the Brisbane River. It is wide, has a surface of smooth asphalt and it is very clearly separated from pedestrians. There is a strip between the white line to indicate the edge of the path and the wall to the right. Left a rest area with a bench, a bin and a structure to provide shade. This is perfect infrastructure! (Unfortunately an exceptional piece of infrastructure…)

Many people use this perfect cycle route to get from some of the inner suburbs to the CBD for their work for instance. But if you are not so lucky and you live elsewhere without access to that route, cycling on the bigger streets of Brisbane is a very different experience. Cycle lanes can feel very unsafe with the higher speeds. Some of the separated cycle paths I saw were also not up to the world’s best practice. They were constantly interrupted by driveways and side streets and it was completely unclear who had the right of way at these points. This makes riding there very unpleasant and even dangerous. Wearing protective gear won’t do anything to improve your safety. It is the infrastructure that makes you safe. It is also infrastructure that makes cycling pleasant. I saw very good cycle paths, but especially the junctions leave a lot to be desired which makes the good infrastructure disconnected. With an increase of cycling of 7.5% per year in the last decade, the city really needs to improve some of the cycle routes. As my video also shows: the demand is there!

Cycling in Brisbane, my experiences in a video.

Some of the footage was filmed by Marijke Wagenbuur-Ketelaars, some by Paul Martin and some of the pictures are by Richard Bean. A big thank you for these latter two for showing me around Brisbane on a bike and for filling me in on cycling in Brisbane!

32 comments on “Cycling in Brisbane”

This entry was posted on 14 November 2013 by Bicycle Dutch in Original posts and tagged Australia, Brisbane, infrastructure.