Zwolle is one of the five nominees to become best Cycling City of the Netherlands in 2014. Chosen from a long-list of 19 municipalities, these five municipalities compete to take over the title of current best cycling city ʼs-Hertogenbosch, which was elected in 2011. I will make a small portrait of all five nominees and in reversed alphabetical order Zwolle is the first.

A bicycle street in Zwolle where people cycling outnumber other traffic and where cars are guest.

Zwolle is a historic city, with a centre that can still be recognised as a fortified city. It is the capital of the province of Overijssel with a population of almost 123,000. I asked Ilse Bloemhof, the project leader for infrastructure in Zwolle, why she thinks Zwolle should win this competition. This is her response:

“Our main cycle routes got a surface of smooth asphalt. Main routes through residential areas were transformed into bicycle streets, elsewhere we see wide cycle lanes or protected cycle tracks. All these cycle routes take people cycling to their destination in a fast and safe way. We are proud of our great number of (socially safe) tunnels and bridges, especially the cycle bridge next to the new railway line “Hanzeboog”, our fast cycle route (Fietssnelweg) to Hattem and the bicycle roundabout. In an innovative way we make sure that our cycling policies get people cycling forward.” 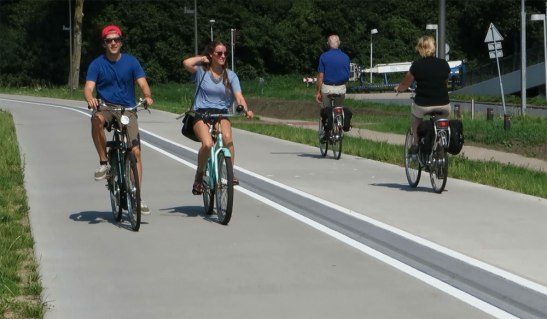 The fast cycle route from Zwolle to Hattem. Is a “dual carriage way” cycle path paved with smooth concrete. This is the route in the built-up area of Zwolle. (There will be a separate blog post on this high-speed cycle route soon.)

The main theme for the 2014 competition is “Cycling without barriers” and according to Ilse Bloemhof this is a perfect theme for Zwolle.

“This municipality has been taking away barriers since the 1970s. And because we have been working on our cycle network for such a long time we now have:

The new rail-road bridge has a cycle track along side of it. The bridge over the river IJssel is part of the high-speed cycle route from Zwolle to Hattem.

The consistent bicycle policies for forty years led to a very healthy cycling environment in Zwolle. Ilse Bloemhof notes: “Nearly 50% of all trips in the city – by residents, commuters and people cycling for recreation – are by bicycle. This makes Zwolle the city in the Netherlands where people cycle most.”

It must be mentioned that Groningen also claims that 50% of all trips are made cycling and in the Amsterdam city centre the model split is thought to be 60%. But it is clearly visible that many people cycle in Zwolle. I really liked cycling there. It was easy and I felt safe most of the time. It was clear Zwolle is investing heavily in cycling. There were many traffic situations that looked brand new.

But apart from all the good things Zwolle has to offer, the preference for cycle lanes has led so some very special junction designs in the past, that I personally was not very happy about. Where most cities make sure the cycle lanes turn into protected cycle tracks right before any junction, some junctions in Zwolle still show how this city decided to continue the cycle lanes right across the junction. A side by side comparison shows how that complicates the junction design. Not only do people cycling going left have to position themselves between two lanes of motor traffic – for which they have to cross one lane of traffic coming from behind them –   it also requires more space! Because in the approach you need two cycle lanes, one to go left and one to go straight on (and right where possible). Whereas with protected cycle tracks only one cycle track is needed. The left example is one I haven’t seen very often in the Netherlands. Most of the newer junctions – also in Zwolle –  are of the type you see on the right. That type of junction is much clearer, safer and therefore the preferred option of more modern road design. The majority of junctions in Zwolle is fortunately of the second type.

In even more modern road design Zwolle tries to keep the routes of motor traffic and people cycling apart (unravelling routes), to minimise the number of interactions between the two types of traffic. As I have shown you before, Zwolle is also not afraid to innovate. Their bicycle roundabout was a first for the Netherlands. An evaluation has been completed, but Zwolle has not yet received the results. However, the initial findings were all very positive. Ilse Bloemhof explains: “people especially like crossing the street on their bicycle with this new bicycle roundabout, because there is no longer any waiting time for them. People also find the materials we used for this design attractive.”

The innovative “bicycle roundabout” in Zwolle. The innovation is that it is impossible for motor traffic to drive a full circle. For people cycling that is possible and on top of that they have priority over motor traffic. This was on the opening day. The centre section of the roundabout has been planted.

All in all I think Zwolle is a nominee that could score very well in this competition.

Video portrait of Zwolle, nominee to become best cycling city in the Netherlands in 2014.

Update: Zwolle won the title in 2014! See my post announcing the winner here.

Note: The weather in Zwolle in these images and the video may look a bit strange for winter, but that is because I shot all the footage in August 2013.
The portraits of the other four nominees will be published every other week from now on.

This entry was posted on 23 January 2014 by Bicycle Dutch in Original posts and tagged Fietsstad, Zwolle.