How come there are no pot holes in the Netherlands?

“How come there are no pot holes in the Netherlands?“ Every time I show Dutch infrastructure to foreign guests that question keeps coming back. And it’s not just people with an interest in road design that notice it. “In the Netherlands I did not see one pot hole in the road and I have seen a lot of the Netherlands. Basically Dutch sidewalks and streets look so damn clean you could like eat off them” writes a visitor to a forum on the internet. 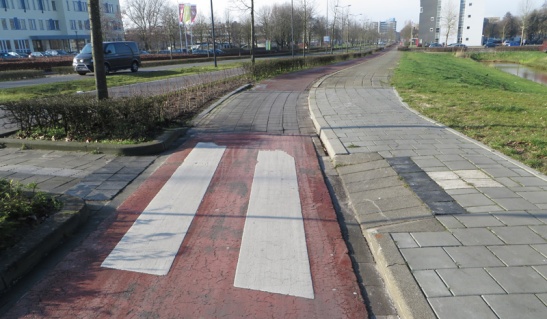 Before the reconstruction of Kooikersweg in ’s-Hertogenbosch there were cracks in the asphalt surface, partial repairs with tiles and also the foot way was in a bad condition. 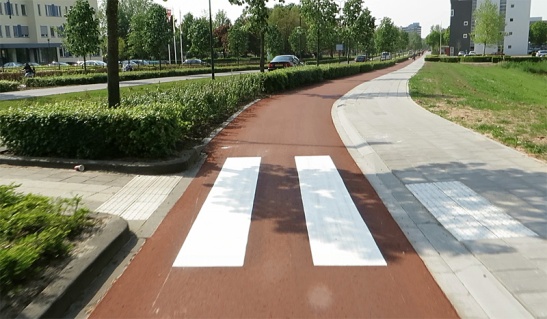 After the reconstruction there is new asphalt on the cycle way and we see new tiles on the sidewalk. There are tactile tiles for the visually impaired at this zebra crossing and the kerb (‘curb’ in North-American English) is lowered for people in wheel chairs or with baby carriages.

This surprise goes back a long way. In his 1661 book “Les délices de la Hollande” Frenchman Jean Nicolas de Parival writes that the Dutch seem obsessed with the cleanliness of their streets and their homes: “The living room floor was so clean that a visitor would not even dare to spit on it.”

In 1673 Englishman sir William Temple linked this Dutch characteristic to the climate:

“The extreme moisture of the air I take it to be the occasion of the great neatness of their houses, and cleanliness of their towns. For without the help of those customs their country would not be habitable by such crowds of people. The same moisture of air makes all metal apt to rust and wood to mould; which forces them, by continual pains of rubbing and scowering, to seek a prevention, or cure. [It] forces them, to exactness of paving in their streets, […] as, indeed, most national customs are the effect of some unseen or unobserved natural causes or necessities.”

From: Observations upon the United Provinces of the Netherlands.

Clearly visible is the very bad condition of the asphalt surface of the cycle way. Tar was used to repair cracks but that has proven to be inadequate over time.

With the new surface of smooth red asphalt, the cycle way is in an immaculate state again.

Whatever the reason for this trait: maintenance is something the Dutch value. And not only for aesthetic reasons. The surface of the infrastructure is of high importance to people cycling. In the CROW design manual we find: “Paving is an essential element of a bicycle friendly infrastructure. The road management authority must realise that what is regarded as light damage for motorised traffic is very easily moderate or even serious damage for cyclists.”

The main requirements for a good road surface for people cycling are:

Asphalt is the type of surface that is most appreciated by people cycling because it has the most even and seamless surface. With a good foundation you can prevent pot holes, but after years of use even asphalt will show wear and tear. Of course the Netherlands does have streets in a poor condition, but they are being dealt with. That is the reason the city of ’s-Hertogenbosch recently re-paved cycle ways on a busy arterial of which the surface was simply no longer good enough. The pictures in this post show you some before and after examples.

Note how the former kerb cast a shadow over the cycle way, which made it optically narrower than it really was. Also visible are the many cracks that were sealed with tar which made the surface less smooth overall.

The city did not only replace the surface of the cycle path but also the tiles on the foot way and the dividing kerb (‘curb’ in North-American English) between the two. That kerb now has a 45 degree angle. This may seem like a detail but makes the division less intrusive. Not only can you now (accidentally) hit it with your front wheel without an almost immediate fall, it also casts no shadow on the cycle path. No shadow means that the path looks optically wider. This enhances both actual safety and the feeling of safety. This cycle route – with its separated cycle paths – was built in the 1970s, on an arterial street. I have shown you the continuation into the city centre in an earlier post. Initially, the path was tiled with concrete slabs. These tiles were replaced in the 1990s by asphalt, that now had to be replaced again by a new coat of asphalt. The video shows you what a difference that makes: yet another street without any pot holes!

Before and After of Kooikersweg in ’s-Hertogenbosch.

34 comments on “How come there are no pot holes in the Netherlands?”

This entry was posted on 15 May 2014 by Bicycle Dutch in Original posts and tagged ’s-Hertogenbosch (Den Bosch), cycle paths, maintenance.