Casual cycling in a building site

After all the recent posts on infrastructure, it is time to focus again on who that was all built for: ordinary people on their bicycles. During my lunch break I pointed my camera at people cycling in the station area of Utrecht. I’ve shown you many videos of rush hour in this area, but because over 22,000 people pass here on a bicycle every day, you see people cycling here any time of the day, also outside rush hours. If you look at who you see cycling in this video, you can tell the working part of the population is largely missing. You see lots of students, women and also children, which means it must have been a Wednesday afternoon, because traditionally that day is still only a half a school day for most schools in this country. You can even see some dads who have just picked up their kids from school. The Netherlands is the country where (relatively) most people work part-time. Couples make sure their part-time hours are organised in such a way that they can take turns in caring for their children and you can even see that in the streets!

Two dads who have just picked up their children from school. One in a ‘bakfiets’, the other on a standard Dutch bike.

The station area is a mess, it has been for years and it will be for quite some years. A recent aerial picture from the website CU2030 shows that very clearly. I filmed on locations in the bottom part of the close up picture below. Because of all the building activities going on here, the infrastructure is almost all temporary. But even these temporary cycleways are okay.

The building site around Utrecht Central Station (top right) as it was around June 2014. Everything was filmed in the lower half of this photo. (Picture courtesy of CU2030.)

That doesn’t mean things always go right. There is a near collision in the video when a boy with a hat cycles around people waiting for the traffic light on the wrong side of the path when a scooter is approaching faster than he thought. Luckily both pull their brakes in time and it was just a near miss. On another day I have seen a scooter rider really collide with a mother with child, who tipped over and fell on the ground together. The child was crying very loud but more of the shock than of actually being hurt. With all the passers-by immediately comforting her and her mother, things were quickly back to normal. The low speeds with which these small collisions take place make the consequences relatively mild. But people do complain that this area is so confusing and busy that too many collisions take place.

The boy in the hat is on the wrong side of the path and didn’t anticipate the scooter to approach so quickly. But both scooter rider and boy react appropriately and the result was only a near miss.

Even though it is a myth the Dutch don’t signal at all, it might help here if people would signal a bit better. We Dutch do signal, just not so obviously and only when we think it is necessary.

Some of the signals that you can witness in the video.

Yes, that is a signal. This man will turn left. The Dutch are not a people of big gestures…

She is signalling a left turn as well. But her hand doesn’t even really leave the handlebars and her gesture lasts less than a second. (But she repeats the gesture when she becomes aware the man next to her signals more clearly.)

Half a second later: she’s done, but the man in the middle still makes that much clearer gesture and so does the man on the left. But even they keep their arms close to their bodies. In this heavy cycle traffic you have a real chance of hitting someone if you don’t…

This boy signals right after he saw his mother do it from the corner of his eyes. But only briefly (even shorter than his mum) and while accelerating and standing on the pedals. Clearly as an afterthought, but you can see that the bike is under his full control, even at that age. 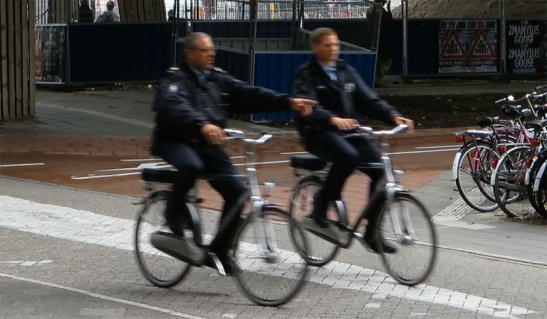 Even representatives of the Law do not signal more than necessary. If one points in the right direction, surely everybody will understand they’ll both go that way…

But even without clear signalling and considering how busy it is here even on an afternoon; things don’t really go wrong here in a major way. The building-site cycling infrastructure is clear and wide. The city made sure there are almost no bollards and people keep their speeds low. All in all cycling is not so bad here. Especially when you know it is all on temporary infrastructure. Oh, but wait… this post was supposed to be about people cycling and not infrastructure. It goes to show that the two are linked and can hardly been seen separately. But the video does show a lot of people cycling, I can guarantee you that. Enjoy!

Relaxed cycling in a building site, on a Wednesday afternoon. As this still already gives away, there is some hi-viz and helmet wearing at the end of this video, but not by people cycling!

And when you then see what the new permanent cycleways in the area look like… that really makes me happy! 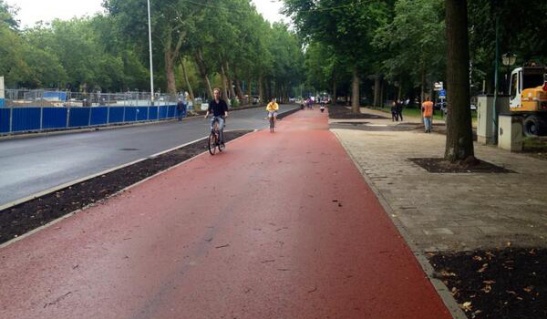 One of the first bits of new permanent bicycle infrastructure in the Utrecht Station area is this bidirectional cycleway at Catharijnesingel.

A short video by CU2030 explaining some of the projects in this area.

15 comments on “Casual cycling in a building site”

This entry was posted on 17 July 2014 by Bicycle Dutch in Original posts and tagged Utrecht, watching people cycling.