It is one of my most viewed videos, the video in which I explain that common Dutch intersection design would not take up more space than typical US crossroads design. That you can indeed change your old fashioned intersection and replace it with modern Dutch design is now proven even better. Recently Utrecht reconstructed an intersection that was first designed in the 1960s and that had not been fundamentally changed since then. It now got this typical Dutch design and that was not before time! 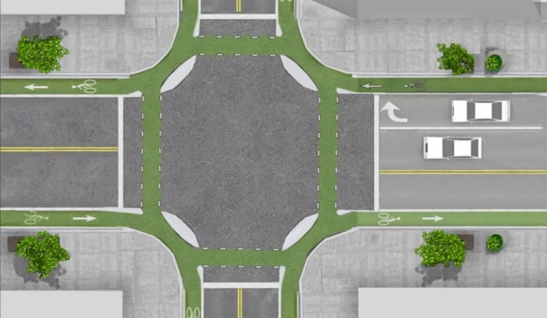 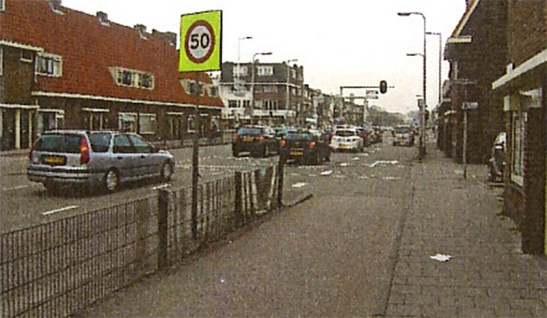 St. Josephlaan Utrecht before the reconstruction.
The protected cycleway stopped and you had to cycle with motor traffic to reach the intersection. (Picture Utrecht Municipality) 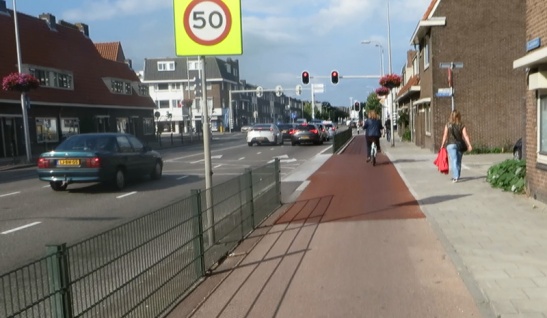 St. Josephlaan after the reconstruction.
The protected cycleway continues at the expense of the dedicated right turning lane for motor traffic.

Fortunately that changed in this country and most intersections now have safe infrastructure for cycling. But for a few places with a design legacy that was for some reason ‘forgotten’ to be updated. I have shown you earlier that there is a whole range of solutions for safer intersections, but for an urban area like this one – with relatively narrow streets and a lot of traffic – this design – with protected cycleways all around the intersection – is really best.

For people from other countries, the before situation may look like something to strive for. In fact, a lot of Copenhagen’s intersections are very similar. Some advocates in the UK will be happy to see all the ASLs (advanced stop lines) and bike boxes. So they can point out that they are really Dutch. But this is old-fashioned design that has proven to be inadequate! This was one of Utrecht’s blackspots: an intersection of the city’s inner ring road and a main route into the city centre. The latter, Amsterdamsestraatweg, featured in quite a number of my videos, is used by 17,000 private cars and 13,000 people cycling per day (Figures Fietsersbond 2012). St. Josephlaan/Marnixlaan, the ring road, is used by circa 18,950 motor vehicles per day (Figures Utrecht municipality 2012). Where the two meet a total of 21 crashes, which injured 7 people, were reported for the period 2004-2006. Four people were injured so severe that they needed medical treatment in a hospital. That may not sound like a lot to some, but in this city there was only one intersection in that period with one more casualty.

No wonder the city made plans to improve traffic safety at this location.

St. Josephlaan in Utrecht in 1973, shortly after it was constructed this way in 1968. The cycleways on either side were designed in, right from the start. But they stopped at the intersection, of which you can just see the traffic lights. (Picture Utrechts Archief)

The same location in 1983 shows that one lane for motor traffic was added and that the cycleways on either side of the street were narrowed considerably for that reason. This was at the time that cycling declined dramatically in the Netherlands. A situation that was later reversed. (Picture Utrechts Archief).

The narrowest part of the city’s ring road (St. Josephlaan) measures just 21.9 metres (almost 72 Ft) from façade to façade. In that space we find 4 lanes for motor traffic, two one-way cycle tracks of 2 metres wide and side walks on either side. Not easy to fit this junction design in such a tight space, but Utrecht found a solution.

The city informed the residents of its plans as follows.

At this intersection there is little room for the many people cycling. From St. Josephlaan the cycleway even stops right before it reaches the intersection. People cycling have to manoeuvre between motor traffic to get to the traffic light, which is dangerous.

The works started in March 2014 and were finished in June 2014, but for the new traffic light installation that will be installed at the end of the summer. The gas company took this opportunity to replace gas pipes now that the streets were open anyway. Other cables and pipes were not replaced this time.

My video showing a before and after of this intersection and how that changes going straight-on and making a left turn and a right turn.

The reconstruction was part of a plan to reconstruct 28 locations in the city to improve traffic safety. The municipality informs about the progress of all these projects on a website. This is “measure number 8”.

The city considers the reconstruction of this intersection the first step towards a downgraded west-ring. The city has expanded so much to the west that a ring road here is no longer in the right location. In a concept report, published in January 2014, the city shows what it would like this road to look like in 2020. Downgraded to only 2 lanes for motor traffic and much more friendly to people (either walking or cycling).

From ‘ring road’ to ‘city boulevard’, a picture of the current (2014) situation and the vision for 2020 for St. Josephlaan in Utrecht. From the concept “Measures in Utrecht-West” by the Utrecht municipality.

This is the first post about this intersection reconstruction. This post and the video focus most on the before and after situation. In a follow-up post (scheduled for next month) we will look into the new situation in more detail. I can try to explain questions you might have about this design. So please use the comments to inform me of what you would like to know.

21 comments on “Intersection redesign in Utrecht (1)”

This entry was posted on 28 August 2014 by Bicycle Dutch in Original posts and tagged before and after, junction design, protected intersection, Utrecht.