Candidate cities for the best cycling city of 2016 announced

Today the Dutch Cyclists’ Union published the names of nine municipalities who applied for the “Fietsstad 2016” election to become the best cycling city of the Netherlands in 2016. “These ambitious Dutch municipalities were inspired by this year’s theme: ‘Bikonomics’ to further increase the value that cycling already has for their communities” tells us the press release on the site of “Fietsstad 2016”. The long list contains the nine potential nominees in alphabetical order:

It is good to see some very familiar names in this long list, but it is also clear that there are 10 cities fewer than the long list of the last election. We can only speculate about the cause for that. Maybe the theme is not concrete enough (“decreasing the number of barriers” – the theme from last time – may have been more appealing). But it can also be that municipalities do not feel they’re up to being measured the way they will be in this election. The quality of the last few winners was exceptionally high and that may also scare cities away. 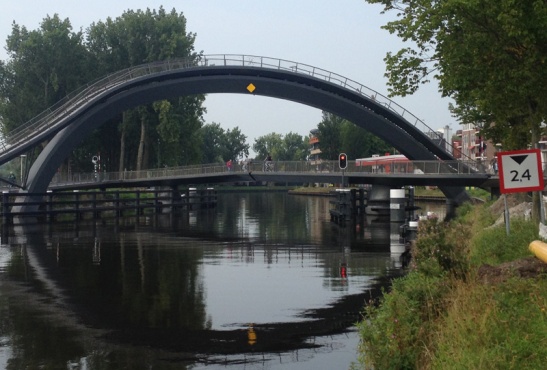 The iconic cycle and pedestrian bridge in Purmerend.

I have shown you examples of quite a few of these cities already. Haarlem is the city with the submerged cycle bridge and one of the first bicycle parking facilities for 5,000 bicycles. Maastricht has featured in two posts before and that iconic bridge in Purmerend may also have stuck with people after my post. I have written extensively about Nijmegen and even more so about my city of birth: Utrecht. It is interesting that two of the candidates are linked with a high-speed cycle route that was opened very recently. A post about that is in the making. Arnhem and Nijmegen are also the host cities for the international Velocity conference in 2017. 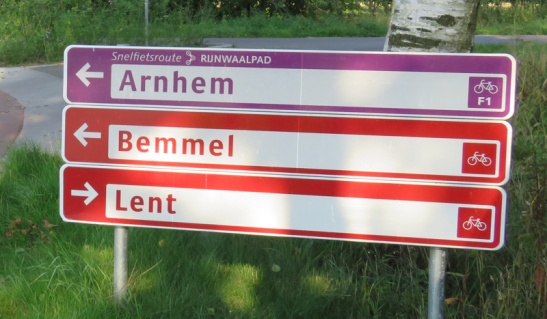 Road sign on the Rijnwaalpad, the high-speed cycle route from Nijmegen to Arnhem that I will cover in an upcoming post.

I have another upcoming post about Arnhem that I will now post with some priority. Oss has so far only featured as end-destination of the ʼs-Hertogenbosch – Oss high-speed cycle route. Goes is a town in the province of Zeeland that I have not written about yet. If it makes it to the shortlist this time (in the last election they also applied but were not selected for the short list) I will have to go that province of my ancestors. I have also never written about Groningen. The city has been covered extensively. Groningen also is a previous winner (2002) so it is a bit strange that they participate again, considering you never lose the right to keep calling yourself ‘Fietsstad’ once you have won the title. But they do have a solid cycling culture that is bound to have sound bikonomics, so who knows what their odds are!

School children in ʼs-Hertogenbosch hold up signs with the title “Cycling City 2011”. 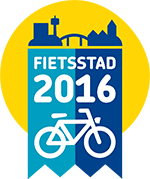 This year’s logo of the election.

The short list will contain the five cities that are eligible for the title. They will be chosen by a jury on the basis of the written application (policies, motivation), figures about mode share, traffic safety and also on information from the routeplanner of the Cyclist’s Union (which gives detailed information about the type of bicycle infrastructure). The short list will be announced at the Bikonomics Symposium on 13 October this year in Utrecht. 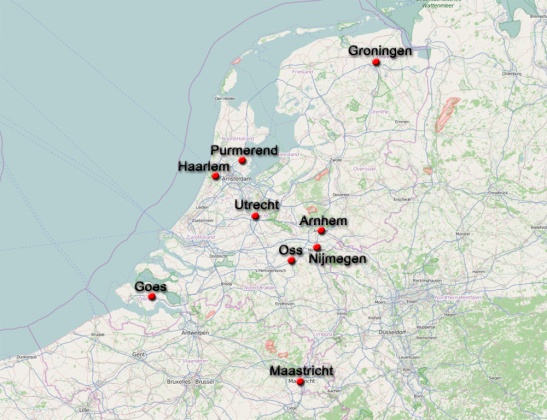 The would-be nominees on a map. (OpenStreetMap)

Rest assured that I will write about the ins and outs of this election in the time to come. You can also follow @Fietsstad2016 on Twitter.

This entry was posted on 3 September 2015 by Bicycle Dutch in Original posts and tagged Cyclists' Union (Fietsersbond), Fietsstad.