For the first time since the Amsterdam Central Station was built in the 1880s there is now a tunnel to pass straight under it. Last Saturday, 21 November 2015, it was finally opened. Building started already in 2011 and the tunnel had been finished long ago, but at the exit cars were still in the way. Only after the riverside car tunnel behind the station was also finished, it was possible to create a safe exit and the tunnel could now be opened, almost two years behind schedule.

Not only pedestrians admired the tile mural. This woman draws the attention of the rider behind her to it. Clearly visible in this picture are the exit of the tunnel and the light strip separating the pedestrian area from the cycle area, which are both safety features.

The tunnel is only to be used for cycling and walking. It is 110 metres long, 10 metres wide and 3 metres high. It is expected that 15,000 cyclists and 10,000 pedestrians will use the tunnel daily. The division between walking and cycling is very clear. Each mode gets 5 metres of the total width. The brightly lit pedestrian area, clad in Delft blue tiles, is at a slightly higher level than the cycleway. That cycleway is kept dark and a strip of light marks the edge. This will let people walking know – subconsciously – where they should not go. Influencing behaviour by design is something that happens more often in Dutch public space because it is much more successful than putting up signs. The dark material behind the steel grating on the wall and ceiling of the cycle part of the tunnel is in fact a soft sound absorbing material. This is the reason that the sounds in the tunnel are pleasantly reduced. There is no echo either. Social safety is enhanced by the fact that the tunnel is light and open and that you can always see the end of the tunnel. There are no dark corners for people to hide in.

The tunnel entrance at the city centre side was kept very plain and simple.

The tunnel gives access to the ferry terminal right behind the Central Station. Before this tunnel was open people had to either walk through the station or ride around it to reach the ferries to the North of Amsterdam. For cycling that meant a 3 minute ride. The tunnel can be traversed in less than a minute. So it shaves 2 minutes off every journey. The railways no longer want non-travellers in their stations, so that was another reason to build a route to bypass the station building. 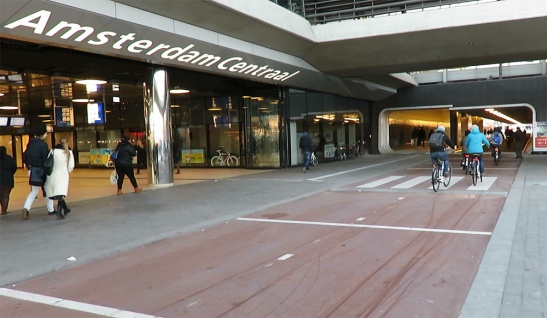 The waterfront exit. The tunnel is implemented in the new bus station and taxi stand now at the back of the station building. A brand new hall was also built.

The tunnel was designed by Benthem Crouwel Architects, who also designed the Paleisbrug in ʼs-Hertogenbosch. About 9,000 tons of sand and rubble had to be removed to dig this tunnel that consists of 20 concrete elements weighing 100 tons each. They are supported by 110 pilings, drilled deep into the ground.

The tile mural in the tunnel drew a lot of attention already on the first day. Inset: the original early 1700s tile mural that the new one was inspired by.

The main eye catcher in the tunnel is the 17th century style tile mural with a fleet of ships on water. The fishing boats are depicted while fishing on the IJ right behind Amsterdam’s Central Station, under the protection of several war ships. It is a modern rendition of a tile mural from about 1700 made by the artist Cornelis Bouwmeester, that belongs to the Rijksmuseum in Amsterdam. Irma Boom designed this new version and a remarkable detail (given the rivalry between Amsterdam and Rotterdam) is the fact that the main tall ship now shows the Amsterdam coat of arms, although the original ship sailed with the Rotterdam crest!

The tiles were hand painted in the factory in Friesland. Picture courtesy of Royal Tichelaar.

A model of the tunnel was constructed in the factory in Friesland to make sure that every tile would fit perfectly in its final location. Picture courtesy of Royal Tichelaar.

The decorative wall tiles were all hand formed and hand painted in a factory in Friesland. At Koninklijke Tichelaar in Makkum a model of the tunnel was built to make absolutely sure that all the 77,000 tiles would fit in the right position. It took two painters two years to transfer the design to the tiles, that have the traditional size of 13×13 centimetres. The curves of the tunnel got curved tiles so the walls are followed really smooth. All tiles were numbered and put in their final place in Amsterdam one by one and by hand. This work of art makes the otherwise plain tunnel really special. Already on the opening day many people took pictures of themselves with this beautiful backdrop. 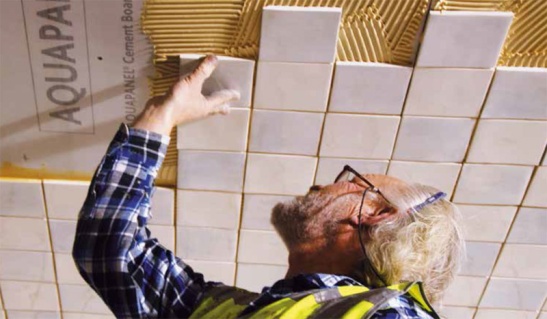 Putting the tiles in their right position was done one by one and by hand. Picture courtesy of Knauf.

There was a storm of protest when the city of Amsterdam announced this summer that the cycleway through the tunnel would end in a shared space zone. With the existing cycleway alongside the IJ there are now three cycleways ending in that shared space zone. The space needs to be shared between people walking and cycling. Most of whom are going to or coming from one of the ferries. There was even an on-line petition to try and stop this plan, but the shared space zone was built. On the opening day it didn’t even look so strange. Considering that the ferries arrive and leave at different locations on the terminal every few minutes, the desire lines change all the time. With this shared space zone people are allowed to ride and walk where they please. It has to be noted, however, that it was a Saturday afternoon and it can be quite different from a morning or evening rush hour. The city will monitor how things go with cameras and there are stewards to guide people if it gets really busy. After some time the situation will be evaluated. Let’s hope the right decision was taken or will be taken if necessary. The first rush hour test was Monday morning and the local press reported no incidents. Everybody was careful and a bit insecure, there was some ringing and people used their brakes a lot, but the flow was smooth.

I marked the new tunnel with a red line on this detail of a map showing the (new) cycle routes around Amsterdam Central Station. Top centre you can see where the shared space zone at the ferry terminal is located. Three cycleways lead to it. Especially the fact that the East-West direct cycle route is now interrupted is something many people find hard to accept.

On the city centre side the cycleway connects to the network of cycleways that already exist. But also on this side a lot will change in the years to come. Private motorised traffic will be completely banned from the centre side, now that the riverside car tunnel at the back of central station is finished. In a post next week I will try to explain all about that enormous change.

Video with background information of the tunnel

This entry was posted on 24 November 2015 by Bicycle Dutch in Original posts and tagged Amsterdam, exceptional cycling infrastructure, tunnel.