Earlier this week I published a post about the new tunnel in Amsterdam that leads people walking and cycling to the ferries to get across the river IJ to the North of the city. So why don’t we have a good look at these ferries? 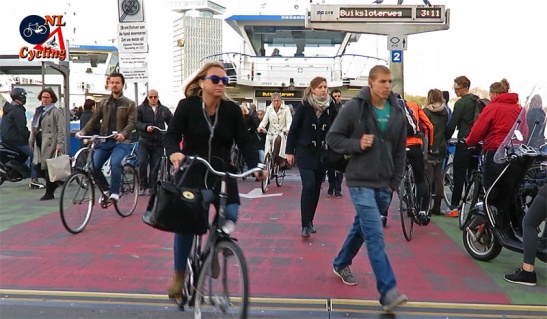 People disembarking from the ferry in Amsterdam. The coloured areas are a very successful way of influencing people’s behaviour without signs: people intuitively understand that they have to wait on the green areas which makes disembarking possible on the red area.

There are currently 6 ferry lines across different parts of the river (or lake) IJ, which can only be used – at no charge – by people walking and cycling (and people on scooters/mopeds and mobility scooters). Three of these ferry lines start north of the Central Railway station. The ferries carry 45,000 people per day. During rush hour they go every 4 minutes. on the busiest line, which is also the oldest. This is the “Buiksloterveer” which was first mentioned in written sources in the year 1308, but it must have been older. That makes this ferry line one of the oldest public transport lines in The Netherlands. 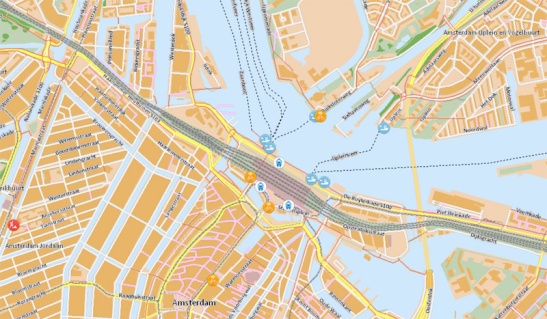 There is a whole network of ferry lines. Most are only accessible for people walking and cycling. Motor vehicles can use tunnels. (Map Cycle Routeplanner by the Cyclists’ Union)

That the ferry is still there is actually very strange. Apparently Amsterdam is the only Dutch city on a river that has no bridges over that river! In an essay about this remarkable fact it is noted that this makes Amsterdam the only Dutch river city that has no possibility for people walking or cycling to cross the river on their own. The writer adds “it is even stranger that nobody in Amsterdam seems to think that that is strange. On the contrary; the very ordinary idea of a bridge across the river IJ sounds to many people from Amsterdam like a ‘wild plan’ that surely is technically impossible and that shouldn’t be brought up all the time”.

An older ‘Plan for a stone bridge across the IJ for the city of Amsterdam” that was never built.

So many plans for a bridge were made in the last 150 years that never led to anything being actually built, that nowadays nobody feels a bridge could ever become a reality. Unbelievable in a country that has so much know-how about water works and where bridges of the kind that would be needed can be found in abundance! A bridge would have to be about 200 metres long and about 10 metres tall (with a part that could be opened for the occasional tall ship) Similar examples can be found in Nieuwegein or three (!) times in Nijmegen. And even Amsterdam itself has a cycle bridge that could be an inspiration. A cycle bridge across the IJ would cost about 20 to 50 million Euro. Certainly not much and recent calculations reveal that it is actually more expensive to not build one: in the long run ferries cost more! 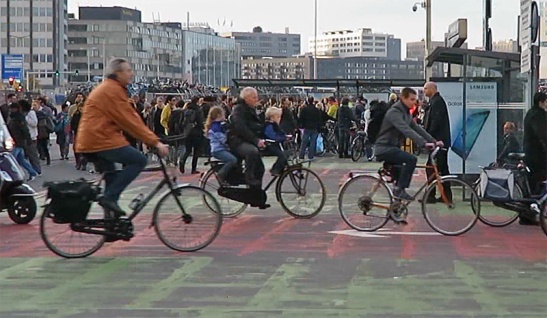 People riding onto the ferry to the North of Amsterdam. Possibly the oldest remaining example of public transport in The Netherlands.

Possible locations of one or more bridges across the IJ in Amsterdam.

But things may change. Amsterdam is finally and seriously studying a traffic connection across the IJ now. It has to, the ferries won’t be able to cope with the traffic volumes in the near future. Because of the many developments in Amsterdam-North, the cycle traffic across the IJ increases by 6% per year. A total increase of 65% is expected by the year 2025. This leads to traffic volumes which can no longer be handled by ferries. To facilitate all that traffic all kinds of crossing possibilities in a large area are being investigated now. From bridges to tunnels and even aerial tramways with access for bicycles. Interestingly enough the city calls the aerial trams “a feasible solution”.

One of the proposed aerial tram lines is called the “Amsterdam Tulip Line” with some interestingly shaped masts. To be honest, this looks more like a fun ride to me, than a genuine transportation option to quickly get from A to B.

But… for the time that Amsterdam stays the only Dutch river city without a bridge, the ferries will continue to take people across the water. It has a nice side too: it looks amazing to see all those people boarding and disembarking the ferries. So I made a video showing just that, for you to enjoy!

Video of the Amsterdam Ferries across the IJ

15 comments on “Watching the Amsterdam ferries”

This entry was posted on 26 November 2015 by Bicycle Dutch in Original posts and tagged Amsterdam, ferry, watching people cycling.