Groningen; Cycling City of the Netherlands?

“Groningen is a real cycling city. No less than 60% of all traffic movements is by bicycle. This makes us proud. To keep it this way we want to give the bicycle more space in the years to come.” This is a small excerpt of why the city of Groningen feels it should become Cycling City of The Netherlands in 2016. That “in the years to come” is an interesting addition. This competition is about the state of cycling now and so the question is: is Groningen great at this moment? After my visit to the city I must say that I do not think so.

Cycling City of the Netherlands Competition

The municipalities of Goes, Groningen, Maastricht, Nijmegen and Utrecht are the finalists in the Fietsstad 2016 competition for which the overall theme is “Bikenomics”. The Cyclists’ Union in the Netherlands regularly organises a competition in which municipalities can try to become Cycling City of The Netherlands. The last city to win the title was Zwolle (2014), which followed ´s-Hertogenbosch (2011), Houten (2008), Groningen (2002) and Veenendaal (2000). Before 2011 municipalities were chosen on the basis of the results of a cycling quality investigation by the Cyclists’ Union. From the 2011 election on municipalities have to enter the competition themselves. The 5 finalists were chosen by a jury on the basis of the written motivation, the policies and the figures about mode share, traffic safety and the type of cycling infrastructure in a municipality. On my blog I feature a video portrait of each of the 5 candidate municipalities. I publish these posts every other week, leading up to the announcement of the winner on 19 May 2016.

The expectations I had of Groningen were very high. Like many of you I had read very positive stories about the city in English language articles from visitors of both the UK and the US. Unlike the editors of those articles I looked at the city with Dutch eyes, knowing what is going on in many other cities of the Netherlands. It was also a ‘fresh look’; I hadn’t been in Groningen for at least 15 years. Mainly because it is an over 3 hour journey away from my home. For that reason I spent a night in a hotel and that gave me plenty of time to ride around the city on a rental bicycle. 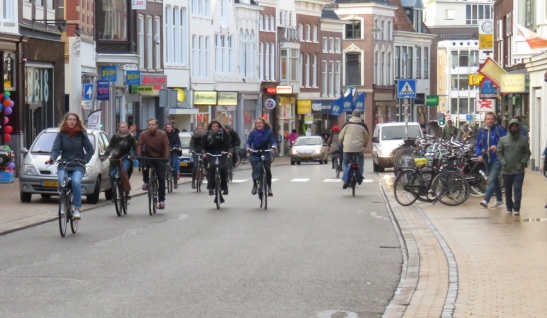 Cycling in Groningen is all too often shared with motor traffic. I really wondered why streets like this one are not yet designed as cycle streets.

Naturally cycling is easy in Groningen. Most of the basic features of Dutch cycling infrastructure can be found there. That modal share of 60% is very high, but that is not the only criterion for this competition. We should also consider that there are 30,000 students in this very compact city of 200,000 people, a very good population structure for cycling. The compactness of the city makes distances almost always short. Good points are the parking facilities at the main station. The covered ‘City Balcony’ (Stadsbalkon) and the other facilities give room to park about 10,000 bicycles and there weren’t many racks empty. To spread the parking load a bit, the city has rebuilt the suburb station of Europapark. You can now find a very good parking facility there too. Without double stacked racks yet, which means that the facility can be expanded to double the 700 parking spaces in future. But Groningen doesn’t rise above average with such facilities in my opinion. Huge bicycle parking facilities can be found all over the country now, some much more aesthetically pleasing than the concrete deck which the ‘City Balcony’ effectively is.

The beautiful new underground bicycle parking facility at the Europapark Railway Station. At the moment room to park 700 bicycles, this can be raised to 1,500 when double stacked racks would be installed here later.

Groningen is very proud of its “all directions green intersections”. With the city of Enschede they claim to have invented them. As I have written before: these intersections don’t impress me at all. Having cycled on such intersections again now I can only confirm how much I dislike people coming at me from all directions and never having a carefree passage. I almost get the feeling this feature is only there to disguise the fact that Groningen has almost no protected intersections. The green phase to give cycling an all-directions-green-time prolongs the total signal cycle, but – apparently to decrease the nuisance for other road users – the green time is kept as short as possible (seconds only). This in turn leads to the fact that you will find a red signal at almost every intersection you arrive at. In my opinion the alleged advantage that turning left does not have to take place in two stages is completely negated by that fact. 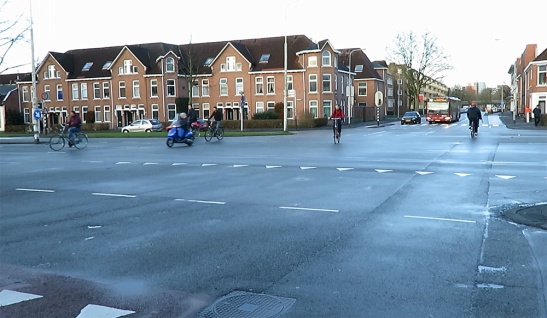 An “all directions green” intersection in Groningen. In just a few seconds people have to traverse this huge area of asphalt, hindered by people going in different directions.

And there was more I disliked: the overall state of maintenance of the cycling infrastructure is below average. Especially compared to Goes, one of the other finalists, the surfaces are just not good enough. Unfortunately the Groningen Cycling Strategy for 2015-2025 doesn’t mention a plan to improve it, on the contrary; it claims the surfaces are all smooth red asphalt.

A bus / bike conflict at the canal ring. The main cycle route is straight-on (which is invisible on the street) while the main route for motor traffic makes a sharp turn. I felt very uncomfortable cycling here in the same direction as the men in this picture do.

In 1977, Groningen was well ahead of its time when the so-called Traffic Circulation Plan for the city centre came into effect. It divided that city centre in four compartments. Private motor traffic could only go from one compartment to the other via a ring road. But that so-called canal ring did not get any cycling infrastructure. Motor traffic drives pretty fast there and in multiple lanes. I was glad to read that the city wants to improve the canal ring for cycling, but that only confirms the current situation is less than desirable. Nowadays most cities in the Netherlands have a car free city centre, or at least a centre around which most motor traffic is diverted. What was very strange to notice in Groningen is the fact that full-sized buses, even articulated buses, go right through the narrow streets of the old city centre. Bus/bike conflicts are the worst, because of the enormous difference in mass and speed. Just watching these interactions made me cringe several times. It is good to hear that just last week the council decided to phase out the buses from the city centre. Alas, only from 2018 on! So the dangerous bus/bike conflicts will continue to exist for quite some time.

This intersection in Groningen is so unusual that there are indications which way to look. “Look left” at this location.

The crossing of the route to the university area Zernike with Eikenlaan. A crossing that was obviously not designed to handle the more than 17,000 people passing here on their bicycle every day.

Two years ago the city created an alternative route to the University Campus Zernike. The route has fewer signalised intersections than the main route and runs mostly away from motor traffic. In just a short time it has become a very well-used route that sees more than 17,000 riders per day. But this leads to problems. Some of the cycle paths in this route are really not designed for that traffic volume. That also goes for the crossing of Eikenlaan. I spent some time observing that crossing during the evening rush hour and I filmed a number of downright dangerous traffic situations. (Some of which are shown in my video below, from the 3:50 to the 4:08 minute mark.) It was good to read the city acknowledges this fact. The program of measures to be taken (the “Uitvoeringsprogramma 2015-2025”) mentions that already in 2014 the council decided that this crossing should become a “cycle zebra crossing”, which implies priority for cycling. Great, but apparently the reconstruction has not taken place yet. So again, this is something for the future.

Korreweg today, with one-way protected cycleways on either side of the street. The city wants to remove these cycleways and turn the street into a cycle street; one roadway where motor traffic and cycling share the space, but with priority for cycling. 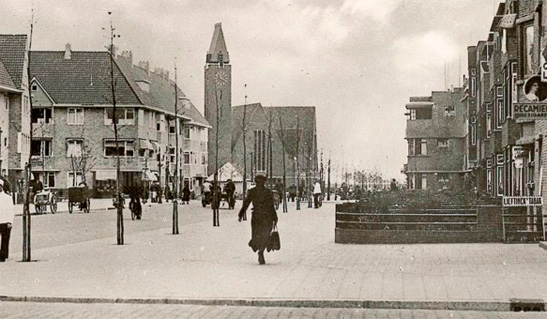 Korreweg at the same location long ago. This is how the city would like to see the street again, with more space for people walking and cycling.

What was strange to notice, is that Groningen has only very few roundabouts. The only one I found was also not designed according to the latest design recommendations. The city apparently has no cycle streets yet either. Many of the streets in the city centre would benefit a lot from being redesigned as cycle streets. Drivers of motor vehicles, although a minority, still behaved as if they owned the black asphalt in these streets. But the city has other plans. It wants to build a cycle street in Korreweg. A street that has protected cycleways on either side of the roadway now. The city wants to remove these cycleways (!) and have motor traffic and cycling in the same space. That would then be a cycle street with red asphalt where cycling has priority. This is marketed as ‘giving cycling more space’. I find that odd, but it is an interesting development that I do not know any other examples of. It might turn out to be a good plan, but again, this is a plan, not something that exists today.

“Time to get to work!”, is the conclusion in the Cycling Strategy of the city of Groningen for 2015-2025. I couldn’t agree more!

Becoming Cycling City of The Netherlands 2016 is about the cycling situation today. What I saw in the streets of Groningen now is in no way nearly as good as what I saw in the other finalist cities. Yes, Groningen was ahead of its time long ago, and yes, it has won the title before (2002), but other municipalities caught up with Groningen and some even overtook it. I am very glad to see that the city has plans to catch up in turn, but it will take a while before we see these plans materialise in the streets. In five years’ time the situation can be completely different again, but for this year’s competition Groningen is in my personal opinion simply not good enough to win the title.

My video portrait of Groningen.

28 comments on “Groningen; Cycling City of the Netherlands?”

This entry was posted on 8 March 2016 by Bicycle Dutch in Original posts and tagged Cyclists' Union (Fietsersbond), Fietsstad, Groningen.