Green pastures, windmills and cows, that’s what the countryside of the Netherlands is like, especially in the two provinces called Holland. For a couple of weeks in the spring things are very different though. Bulb flower fields with the most vibrant colours imaginable – of mostly tulips in bloom – change the entire atmosphere. It took me a couple of years to get there at just the right time, but this week I can show you some of the bulb flower region in South-Holland at its most colourful! 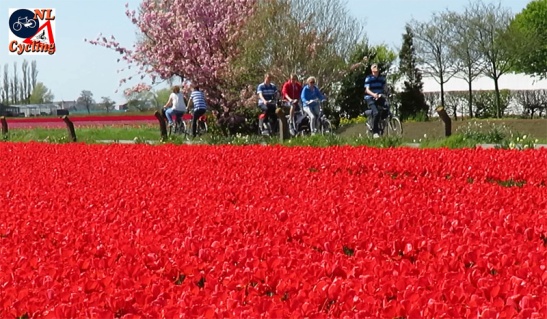 These red tulips seem to radiate in the sun.

I went cycling in the area just north of Leiden with Steven Vance from Chicago, who is in the country for a short sabbatical. Things here couldn’t be more different from what he showed me in Chicago: tiny houses on equally tiny roads and thousands of people underway on bicycles to catch some of the last tulips in bloom. Steve was lucky to be here at the right time (just as I was lucky to see the Jacarandas in bloom the last time I was in Brisbane) for as a famous Dutch song from 1932 goes: “these lovely bulb flowers, you can only see them once every year”.

Tiny houses on small roads, typical for North and South-Holland and the bulb flower region in particular.

This is a wide bi-directional cycleway alongside a bigger road. The red tulips in the field draw all the attention though.

We started our tour at Leiden Centraal, where I rented the new type of OV-Fiets and we headed to the nearest numbered junction. That was the plan at least. It always takes a bit of a hassle to find that network, especially in a not too familiar place. It didn’t help that we were talking too much and missed an essential turn. With the help of several apps and the smart phone we finally reached the Numbered Junction Network at the third junction, but from there finding the way was a breeze. 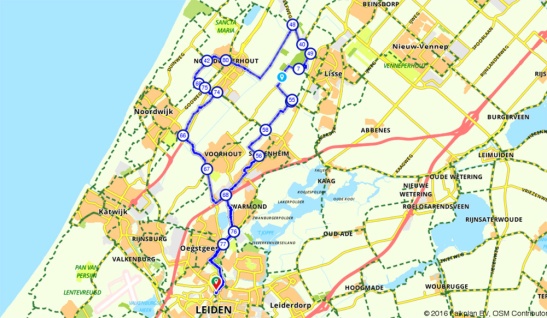 The almost 40km route I created on Route.NL

It is amazing how the tulip has become synonymous with ‘Holland’, although the bulb flowers originally came from Eurasia and North-Africa. The first bulbs bloomed in the Leiden University botanical gardens in 1594. The Dutch were very enthusiastic about the new flowers and this even led to the renowned Tulip Mania in the 1630s. Tulips often appeared on Dutch still-life paintings of the 17th century, and beautiful Delft blue vases were designed to display the tulips. All this helped create the international view of the tulip as a Dutch symbol.

Some fields have more than one colour of tulips.

If at all possible the yellow of these tuilps seems even more vibrant than the red.

Nowadays the area north of Leiden, known in Dutch as the Bollenstreek (bulb flower region), is the most important area of the floral industry. Bulbs are processed for export. Not only tulips, also daffodils (narcissus) and hyacinths. They are planted in autumn and after the bulbs bloom in spring the flowers are removed, so the bulbs can better develop underground. This shortens the time you can see them bloom even more. Some of the removed flowers are used to decorate floats in a huge two-day Flower Parade taking place at the end of April. The flower parade draws international attention. This year the parade included a float from Thailand and one from China. The parade passes most of the towns and villages of the region and ends in Haarlem. It also passes the main flower exhibition gardens “Keukenhof”. This is one of the world’s largest flower gardens. On 32 hectares you can see more than 7 million bulbs in bloom in spring, with a total of 800 varieties of tulips.

Orange tulips seemed very fitting on Liberation Day, since orange is the national colour of the Netherlands. 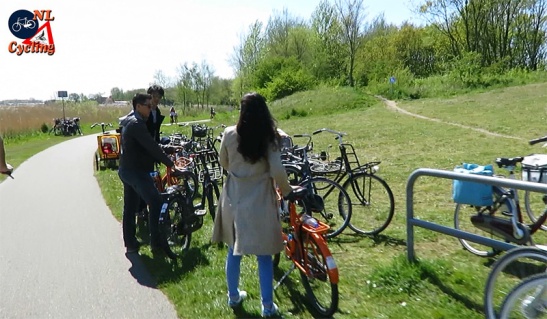 The orange rental bikes revealed that these people are tourists.

The bulbs are dug out of the fields in the summer and sorted. The ones large enough are sold at flower auctions and then exported all over the world. The smaller bulbs will be replanted in autumn so they can grow further and then hopefully be sold the next year. (Watch the full year cycle of the bulb production).

The bulb fields can best be seen from the bicycle. Last Thursday we had two holidays on one day in the Netherlands (Ascension Day and Liberation Day) and it was also the first beautiful warm sunny day, so many people got out on the bike. Some of the cycleways were really crowded, especially around the Keukenhof Gardens that hires out bicycles, also to many tourists. Their bright orange bicycles (and their riding style) stood out. Many of the smaller roads that we used did not have any protected cycling infrastructure, but they were traffic calmed and still very pleasant. The busier roads all do have cycleways, as is usual in this country. The video will show you that we had a great day out in the fields, worth the sunburn!

12 comments on “Chasing tulips in South-Holland”

This entry was posted on 10 May 2016 by Bicycle Dutch in Original posts and tagged Leiden, recreational cycling, ride, watching people cycling.