“Utrecht is a city in transition” said the jury of the Cycling City election last May. It was one of the reasons why the city did not become Cycling City of the Netherlands. A bit surprising, because apart from the building activities in the city centre, most of the main cycling infrastructure in Utrecht is finished and of a very high standard. The 5-kilometre-long cycle route from the north borough of Overvecht to the city centre, can serve as a fine example of a cycle route that has been updated recently. It was mostly finished late 2015. 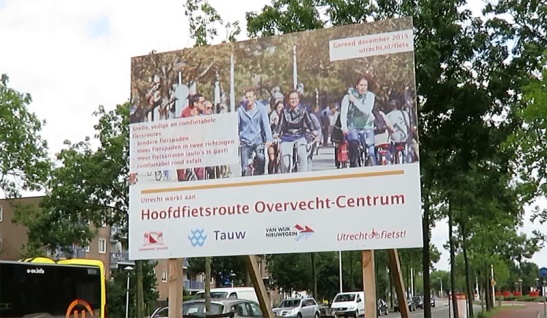 The city announced the big reconstruction works to make the Main Cycle Route really that, at the beginning of the route.

This being the Netherlands, it had always been possible to cycle this route, mostly already on dedicated cycling infrastructure, but this upgrade meant the route became more recognisable and of a higher quality. So the cycleways were widened and surfaced with smooth red asphalt. The final parts of the route update were the transformation of the Talmalaan as a cyclestreet, (which I have shown you in an earlier post) and the Carnegiedreef in Overvecht, which was mostly finished late 2015. The last activity in this route was the reconstruction of one intersection that was finished in March 2016. 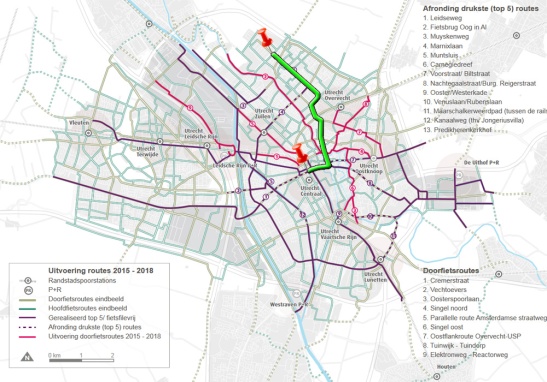 Utrecht’s (upgraded) Main Cycle Routes on a map. I cycled from the north to the centre on the route I highlighted in green.

The reason for the council of Utrecht to upgrade these main cycle routes is that it wants to offer the many people who choose to cycle in the city a safe and attractive route. Utrecht is growing rapidly and the city feels it can only keep the growing city “pleasant, orderly, clean and safe” when even more people cycle. In the case of the cycle street in the Troelstralaan, the update was part of a broader urban renewal and revitalisation plan of that neighbourhood.

The cycleways in the main route are wide and have a surface of smooth red asphalt. It is clear the route is used well, even on the cold winter day when I filmed part of the route.

That also goes for the Carnegiedreef. This is a main access street for a large part of the Overvecht borough, in which the complete street network was updated to better meet the current policies of Sustainable Safety. Many of the through streets were redesigned from 50km/h streets to 30km/h residential zones, for which these streets were literally cut in half. I have shown you this urban renewal project in an earlier post.

The plan for the reconstruction of the intersection of Paranadreef (left to right) with Carnegiedreef (top to bottom). It was built exactly this way. The straight cycleways (in red) make sight lines very clear. Residents of the area keep complaining though, that this particular intersection is still not safe enough.

This was not the first time that parts of the Carnegiedreef were reconstructed. The street had been built in the mid-1960s as a main road with 2×2 lanes for motor traffic and one-directional cycleways on either side, with a tiled surface, which was the standard of that time. This big road encouraged drivers to drive at very high speeds, that killed people. In 1968 a couple in a car crashed into another car, killing the couple and injuring three others, including a 3-year-old child. After this crash, traffic lights were installed on the intersection where that crash had taken place. In June 1979, a young driver, 20 years old, drove 100km/h where only 50km/h was allowed. A 10-year-old girl crossing the two lanes (one half of the Carnegiedreef) on foot had no chance to reach the other side in time and she was killed on the spot, by the speeding driver in his car. In December 1979, he was jailed for 2 months and lost his driver’s license for 1 year. The young girl’s death by speeding led to fierce discussions in which many people asked for a better speed limit enforcement by the police. 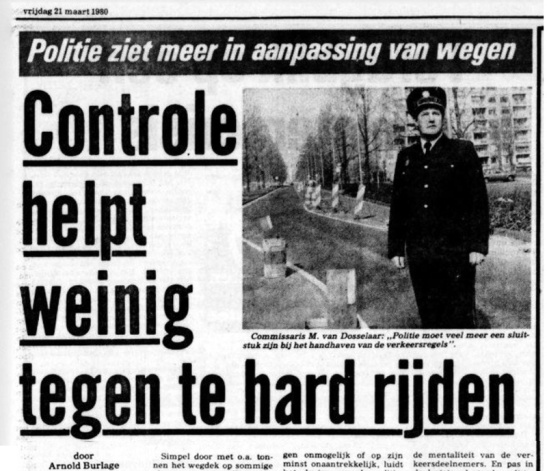 Headlines in a newspaper from 21 March 1980. “Enforcement does little to stop speeding – Police sees more in road redesign” Police commissioner M. van Dosselaar: “Police enforcement of traffic rules should really be a last resort.” He is pictured here on Carnegiedreef with the temporary measures to stop speeding (one lane with chicanes) behind him.

The Utrecht police commissioner for traffic, mr M. van Dosselaar, then voiced some remarkable views for that time. Early 1980, he argued law enforcement was not the answer. He even turned to the minister of transport with some straight forward reasoning: “if something doesn’t work, it is usually wrong”. Meaning that streets where too many people speed are probably designed the wrong way. In a national newspaper he was quoted: “Before we start enforcing, we first count how many people break the rules. If the percentage is too high, enforcement is pointless. It would be much more meaningful to make speeding impossible in such locations.” That is exactly what happened in the Carnegiedreef, only months after the death of the 10-year-old girl. With simple means such as planks and old oil-drums filled with sand, all painted red and white, the municipality had narrowed the 2×2 road to 2×1 lane. The one lane also alternated from one of the former two lanes to the other, creating chicanes. This decreased the speed of motor traffic dramatically, because it made speeding impossible. Just what the police commissioner had proposed. The temporary measures were made permanent, already in the early 1980s, and the chicanes are still present on the Carnegiedreef, to this day.

Carnegiedreef before and after the reconstruction. It is no wonder that people speeded in the before-situation. This clearly was not a road signaling the speed limit is 50km/h (32mph).

The cycle route to the city centre (I rode all the way to the – temporary –  entrance of Central Station) is 5 kilometres. It took me just over 17 minutes, so I rode with an average speed of 18km/h. Which is a reasonable speed, especially when you consider this is a city route with 9 signalised intersections.

The video is available in real-time speed and in 3 times normal speed, both with annotations.

This entry was posted on 12 July 2016 by Bicycle Dutch in Original posts and tagged main cycle routes, ride, Utrecht.