Riding in the Rotterdam Rain

In the morning, it will be clouded with possible rain. With a strong south-westerly wind, temperatures will reach circa 4 degrees (39F). Later in the day the rain is expected turn into snow.

Would you ride your bicycle in that kind of weather? This was the forecast for last Thursday. As becomes clear from this week’s video, this type of weather did not scare away many people in Rotterdam; they just kept on riding their bicycles as they always do.

Cycling in the Rotterdam centre is very convenient. Wide bi-directional cycle tracks, far away from motor traffic, with smooth red asphalt, take you everywhere. Note the tram tracks in the grass right next to the cycle track.

At some locations, such as here near Blaak Train Station, the one-directional paths are sometimes getting a bit too crowded for comfort.

Rotterdam is changing. It used to be known as a car oriented city, but more people of Rotterdam take up the bike more often. In the last decade, cycling increased by a staggering 60%, according to figures of the city itself. That makes people cycling a much more important group of road users.

Detours tell you a lot about a city. This cycle detour indicates that the city thinks people cycling are important. You don’t need to dismount, you can simply ride on, bypassing the road works. 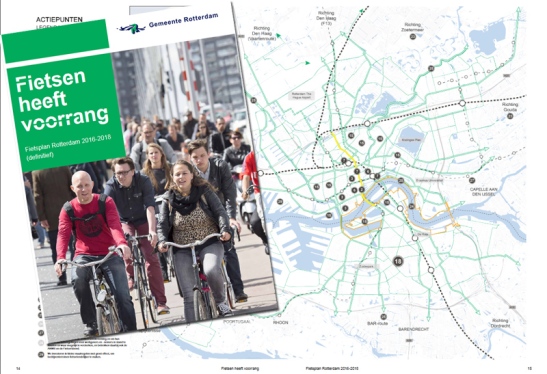 The Rotterdam cycle plan for 2016-2018: ‘Cycling has priority’. This plan mentions 29 places for improvement.

More cycling is good for a city. Fewer cars and more cycling means less pollution, less noise and better health for people. This increase in cycling was reason for the Rotterdam council to give people cycling even more attention. With a three-year plan, the city wants to increase cycling with another 10% by 2018. This should be achieved by giving cycling more space, more comfort and by making it quicker. In Rotterdam, 160,000 people use the bicycle every weekday. The cycle plan for 2016-2018, called ‘Cycling has priority’, mentions 29 points of improvement. This ranges from improving cycle tracks to expanding bicycle parking facilities, making traffic signals more cycle friendly, introducing signal innovations and expanding bike rental possibilities. From 2016, the city will invest 2 million euro extra per annum in making Rotterdam more bicycle friendly (on top of the 6 million it already spends every year). This money will for instance go to smooth new red asphalt on the last 20 kilometres of tiled cycle tracks. But also to traffic signal information panels that were introduced last month in Rotterdam. Following the example of ʼs-Hertogenbosch, which was the first to have such an information panel, Rotterdam now also shows the fastest route to traverse two big signalised intersections. 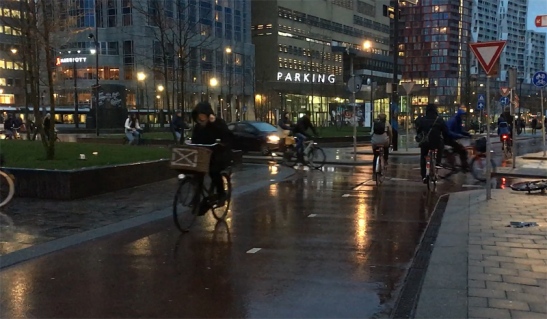 Rotterdam looks far less like a car oriented city on the square in front of Central Station. Many people cycle and walk. But, truth be told, there is a car tunnel underneath this place, that helps create this people friendly image.

Rotterdam gets more attention from foreign visitors. Especially for visitors from the North-America and Australia, Rotterdam looks far more like the cities they are familiar with than any other Dutch city. Because it is easier to relate to, it is also easier to give them ideas about how their own cities could be different. The “5-weeks-5-cities” tour of the Netherlands, of Chris and Melissa Bruntlett and their two children, started in Rotterdam last summer and this is how they described their first impression.

“When we first emerged from Rotterdam Centraal Station, our eyes bleary from 24 hours of air and train travel, it took some time to convince ourselves they weren’t playing tricks on us.

Despite the constant drizzle, a steady stream of cyclists moved in every which way, along three different cycle tracks adjacent to the station. And they hardly resembled the type of people we see on bikes in Vancouver.

Dressed in their regular attire, perched on battered, upright frames (often two, and sometimes three abreast), there wasn’t a single helmet to be seen. Some casually carried a passenger on their rear rack; others had a child on their handlebars. We even spotted a man pedaling along with an umbrella in his right hand, with an effortlessness that had us giddy with excitement.”

The Bruntlett family arrived in the city in a summer drizzle, but the scenes are not much different in a winter drizzle. Apart from the far lower temperatures, that makes everyone wear scarves, gloves, heavy coats and hats, and apart from the fact that it is dark much earlier in the winter evening rush hour, people keep riding as they do in summer, and – for some – yes, that includes riding with an umbrella. Enjoy the images! 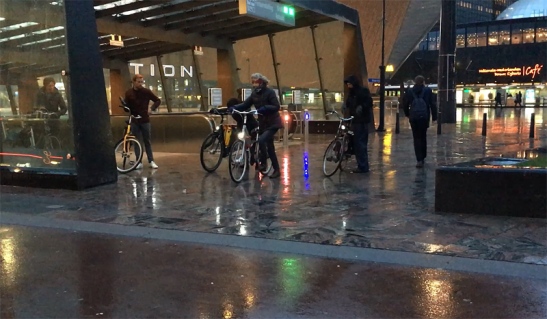 A dark and cold rainy evening in January, but it is busy at the entrance to the underground bicycle parking facility at Rotterdam’s central station.

This week’s video: people riding in the evening rush hour in January 2017.

26 comments on “Riding in the Rotterdam Rain”

This entry was posted on 17 January 2017 by Bicycle Dutch in Original posts and tagged rain, Rotterdam, watching people cycling.