Will Utrecht ban cycling in some city centre streets?

Utrecht postpones the plan to make cycling illegal on some streets running directly past the pedestrianised area. The object of this ban is to create more safe space for walking. In a council meeting last Thursday, council members persuaded the alderman for traffic to reconsider forbidding cycling from 1 January 2018 in a number of city centre streets. The alderman has promised to inform the council, in a letter by mid-December, about further investigations into the consequences of the proposed cycle ban and the subsequent decision on this matter. 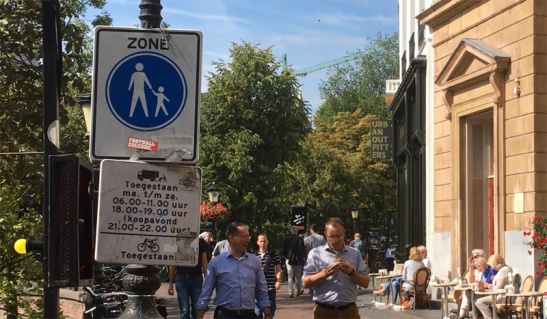 A pedestrian zone where cycling is allowed, that is the current regime on Oudegracht in Utrecht. There is a plan to close this street completely to cycling during shopping hours.

The pedestrianised city centre of Utrecht has been roughly the same for over 50 years (see earlier post). Forced by the growth of the city and the increased number of visitors to the area, the city has begun to make some changes recently. Entrepreneurs in streets directly adjacent to the area were keen to have what their neighbours have: more pedestrians and therefore more potential customers in their streets. Among others this led to the makeover of Domstraat/Korte Jansstraat and Mariaplaats that I wrote about in earlier blog posts. In the latter example shop owners asked for the removal of parking spaces, much to the surprise of the city planners. These shop owners had found out that their employees were the ones parking cars in front of the shops, rather than their customers. To improve the atmosphere in the street the parked cars had to go. Earlier this year, the alderman for traffic, Lot van Hooijdonk, announced that the city of Utrecht wants to pedestrianise the east side of Oudegracht in the city centre that up to now is still open to cycling. On the other hand people will be allowed to cycle in all the pedestrianised streets before shopping hours. Previously you could only cycle there from 6pm to 6am, that will change to from 6pm to 10am. That’s a good idea, but it also means many more streets are to be closed for cycling from 10am to 6pm (10:00-18:00) every day. 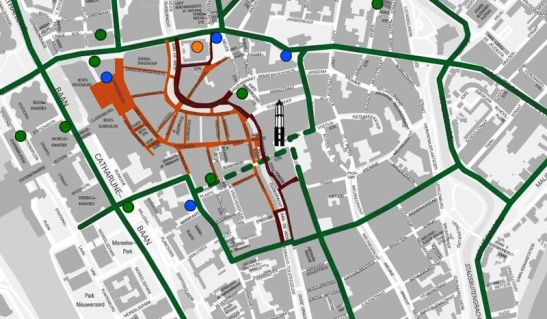 Last July the alderman for traffic (whom we should actually call the executive council member for traffic) informed the city council of the motives behind the decision taken by the Mayor and the Executive Board. In a letter she wrote:

Utrecht is a city where ever more people like to live and work. The growth of Utrecht demands a new balance of the functions that suit certain locations in the city. […] In the pedestrianised area the limited space, the economic developments and the increased number of visitors lead to congestion and conflict between walking, cycling, delivery vehicles and motor traffic. With the expansion of the pedestrianised area the city strives to create more balance between healthy living conditions and a good business climate.

Regarding cycling the letter reads:

The east-side of the Oudegracht is currently an important main cycle route for a number of Utrecht residents through the historic city centre. With the expansion of the pedestrianised area during shopping hours cycling is no longer permitted on this route. After the resurfacing of Domplein and Korte Nieuwstraat and the proposed redesign of Lange Nieuwstaat and Wijde Doelen a comfortable alternative north-south cycle route should have been created. The east-west connection from Domplein to Mariaplaats via Zadelstraat will be a route where the pedestrian is the most important road user and people cycling are guest. 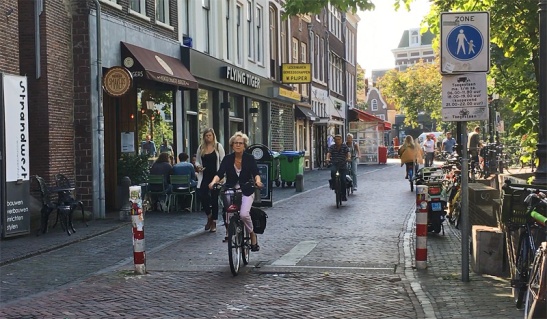 The east-side of Oudegracht Weerdzijde. Now a street where cycling is guest. This street will be closed to cycling. Quite obviously it will be hard to prevent people to cycle here. They will think it is perfectly possible to do so. 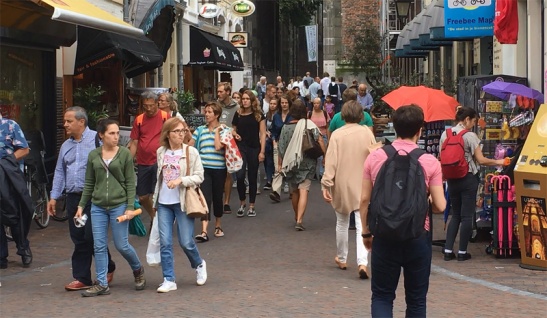 Servetstraat, part of the east-west cycle route. Cycling will be allowed in this street as a guest. For anyone wanting to cycle here: good luck!

Of course, the Utrecht chapter of the Cyclists’ Union had to step in and protest against the loss of an important cycle route, especially before the upgrade of the alternative cycle route has been finished. The Fietsersbond thinks the current urban bustle is normal on such a central location. In a press release, issued last week, the chair of the Utrecht chapter, Peter van Bekkum, states:

“Investigations show that people do not cycle on the Vismarkt when it is very busy. Or they cycle slowly, or they dismount. Other research shows that a ban without an attractive alternative route will not work. People will ignore the cycling ban and that only leads to more irritation between people walking and cycling. Near the bars around Wed and Donkere Gaard you cannot cycle until 6 pm when the shops close. Incomprehensible, because those streets are only busy at night, but exactly then cycling is not forbidden.” 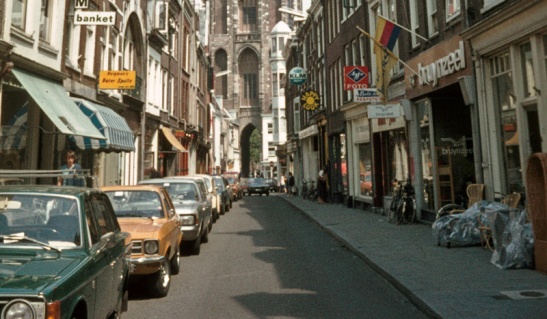 Zadelstraat in the late 1970s, when cars could still use the street. (Picture Utrechts Archief) 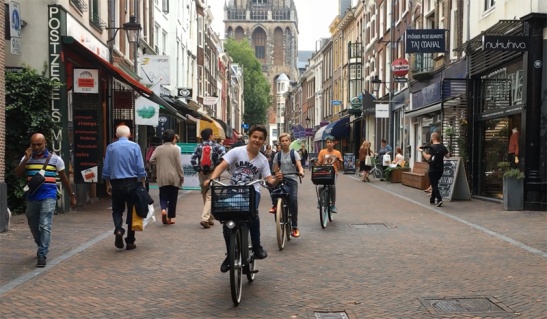 Zadelstraat in 2017, part of the east-west route that will stay open to cycling. After the most recent redesign you can cycle here as a guest. It is stunning to see how much wider a street appears to be when it is not cluttered with parked cars.

It is perhaps very Dutch to think that a ban needs to be understood by people to make sure that people will indeed follow the rules. In the council commission’s meeting (that I followed via a live stream on the internet) the alderman for traffic made clear that she indeed wants a regime that can be easily explained to people. Questions from council members about the volumes of people walking and cycling at the various locations and times made her promise to further investigate those traffic flows. She believes a dynamic ban, depending on the pedestrian volumes, that one of the council members proposed, is legally not possible, but the alderman will consider the feasibility of other pilot schemes.

A publication of the Dutch Institute for Road Safety Research SWOV states that when cycling and walking cannot be combined anymore, due to the high volumes, this is mostly solved by self-regulation. Meaning, people will automatically choose an alternative cycle route when they notice there are too many people walking in a certain location. According to SWOV regulation may not even be necessary. 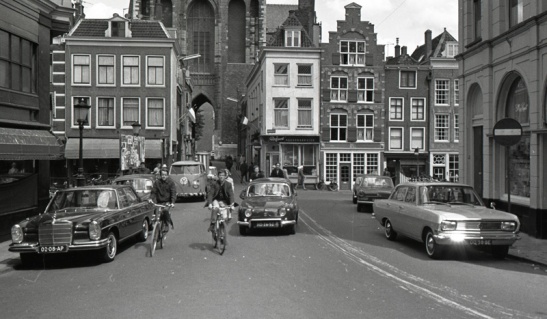 The Maartensbrug in Utrecht in the 1960s. The city looked very different before the city centre streets were pedestrianised. (Picture Utrechts Archief) 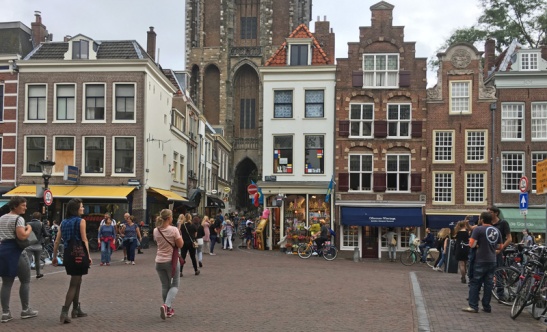 The Maartensbrug after the latest reconstruction in 2017. The bridge has become shared space. People walk where they like and that makes it harder to pass through here on a bicycle.

Living in a city which allows cycling in all the pedestrianised streets, something that works really well in ’s-Hertogenbosch, and as someone who cycles almost daily in the Utrecht streets that are to be closed, I also have trouble to understand why a cycle ban would even be necessary. I find it unexpected from Utrecht as well. It is after all a city that wants to be one of the best, if not the best cycling city in the world. With the Cyclists’ Union I think that some of the streets that will be closed are less busy than some streets that will remain open to cycling. Notably the east-west route is incredibly busy. The recent redesign of the Zadelstraat has led some people walking there to believe they do not have to allow cycling around them. Their dirty looks give the impression that they think you are breaking the rules by cycling in these streets, which is not the case. The “cycling as a guest” regime is obviously too unknown as a concept to be easily understood by some people.

I fear the decision of the cycle ban stands, but I am very curious to learn what the letter of alderman Lot van Hooijdonk will say mid-December. She will perhaps only announce a few minor alterations and a different start date, but I will of course let you know as soon as we know.

My video about the future cycle ban in part of the Utrecht city centre.

A ride through the area that may be closed to cycling. Starting at Gaardbrug, riding on Oudegracht Tolsteegzijde – Wed – Donkere Gaard – Lichte Gaard – Vismarkt – Stadhuisbrug – Oudegracht Weerdzijde and ending at the corner with Potterstraat.
(Filmed on Monday afternoon 4th September 2017, around 12:30)

A decision was taken: Utrecht will not (yet) ban cycling as initially planned

In a letter to the council, dated 28 November 2017, the Mayor and the Executive Board explain their final decision about the changes concerning cycling in the Utrecht pedestrianised area and the streets that will become part of it. From 1 May 2018 the times during which cycling is forbidden in the current pedestrianised streets will change from 6:00 to 18:00 hrs (6am to 6pm) to 10:00 to 18:00 hrs (10am to 6pm) which means cycling in most of the pedestrianised area will be allowed for four hours longer every day. In the streets that will become pedestrianised as of that date cycling will be allowed at all times, with the exception of Saturdays and Sundays from 10:00 to 18:00 hrs (10am to 6pm). Which means that – for now – the cycle ban in those streets during weekdays does not go ahead as planned.

The new measures will be evaluated by counting traffic volumes (walking and cycling) in the course of 2018. Counts on different days in different seasons on different locations must make clear whether a future ban is inevitable. Possible decisions as a result of this evaluation can be taken late 2018.

Other measures announced in the same letter are:

I think this is a very wise decision. It is indeed necessary to reassess the space allotted to the different types of traffic. Only based on facts you can take the right decision. The counts of the actual flows of pedestrians and cycling at different times on different locations will give those facts. It is also good to wait with the possible ban until after the alternative routes were improved. So I am very happy with this decision.

10 comments on “Will Utrecht ban cycling in some city centre streets?”

This entry was posted on 21 November 2017 by Bicycle Dutch in Original posts and tagged car-free, NL is not perfect, urban design, Utrecht.