A disappointing pilot in Groningen

The 18,000 people who cycle to the Groningen University campus every day lost their priority again over the almost 12,000 motor vehicles on the cycle crossing with Eikenlaan. This priority had only just been granted to them. A two-month pilot with reversed priority was cut short. Right from the start the plan met a strong opposition from police and other emergency services, the bus operator and residents. After several incidents with drivers crashing into cyclists the situation was changed back. “The pilot was a failure, because it wasn’t safe enough” said a spokesperson for the municipality of Groningen in the local press. What happened? 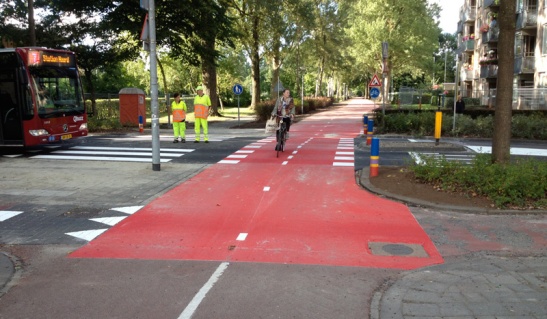 The changed crossing on one of the first days after the priority went to cycling. (Picture Alternative Department for Transport, ADfT)

The crossing as it was before. Many more people cycling had to give way to a much lower number of cars. This is again the current situation.

When I visited Groningen early last year I cycled the route to the University which the city promotes as a safer and more attractive route. I was appalled by the crossing with Eikenlaan. Here was a well-used main cycle route that crosses a local distributer road and it doesn’t get priority? There were droves of people on their bicycles waiting every time a hand full of cars arrived as a peloton due to traffic lights further down the road. I did make some remarks in the blog post, but also noted that there were plans, fortunately, to change this priority arrangement. Because of those plans I didn’t publish a video that I had also made which clearly depicts the crossing in all its awfulness. Thinking that I was already negative enough about Groningen without this video.

The promoted alternative cycle route to the Zernike University Campus in Groningen was quite narrow for the volume of cycling. It is very good that this cycleway was widened considerably since this picture was taken in February 2016. 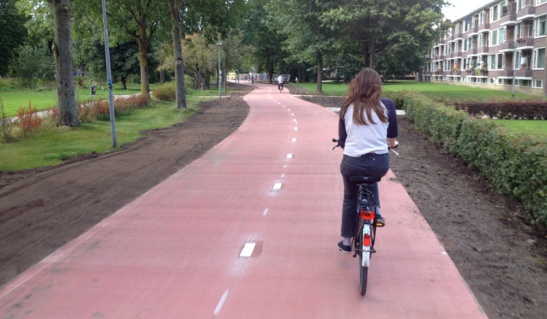 The widened cycleway to the Zernike University Campus in Groningen in September 2017. (Picture ADfT)

It took the municipality more than a year and a half, but last September the priority was finally changed. This had to do with the fact that the cycleways leading up to the crossing had to be widened too. When that project was finished the intersection was also reconstructed. But was it really? The crossing was painted red, but it wasn’t physically changed to slow down motor traffic. No wonder many drivers overlooked the fact that the priority had been reversed and that they had to let people on bicycles go first. The situation was so unclear that traffic wardens had to explain to road users what they had to do. Shouting “cycle on” to people cycling past and signalling drivers to slow down every time people on a bicycle approached. The municipality had planned a two-month pilot and would only make a final design after an evaluation of the trial. It never got that far, after a little over a month drivers on Eikenlaan already regained their priority on the cycle crossing. The municipality now talks about bringing in traffic wardens at busy hours and building a tunnel “in the future”. That sounds more like giving up than making real plans.

Apart from the forest of yellow signs (that confuse more than that they inform) there are no indications from the street design itself that you are approaching an intersection with priority for crossing cyclists. (Picture ADfT)

What genuine measures could have been taken to make the pilot work? From what I saw in the press I could already tell the design of the crossing was very poor, even for a two-month pilot. I asked a local what he thought. The author of the Alternative Department for Transport blog had also meant to write about this intersection, but he hadn’t yet done that either. He did go to the intersection to look at the new situation and told me: “There were no speed reduction measures for motor vehicles – just a couple of warning signs. A recipe for conflict […] I think north-south cycling priority could work here, but it would require something much more substantial than just red paint across the road.”

Some people would like to see traffic signals installed. But traffic experts in the Netherlands usually advise against traffic signals for a cycle crossing. At quieter times people will ignore the lights and that will make the crossing even more dangerous than it already is. 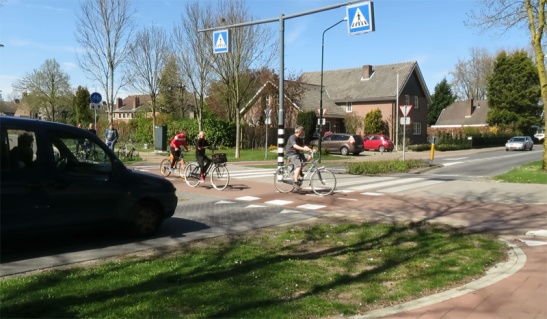 A clear priority crossing for cycling in Beuningen (near Nijmegen).

If you look at the Beuningen crossing from the perspective of a driver you see that there are clear visual clues in the design that tell you are approaching a special crossing, even if you miss the actual give way signs. (Picture Google StreetView)

There are numerous examples in the Netherlands of intersections with priority for cycling that do work. There is one in Beuningen, which also got a lot of initial criticism, but there the council stood strong, even after a crash. After some time the intersection turned out to work after all. Key points there: the crossing is raised (much more than the crossing in Groningen is) and has piano-teeth to make clear there is a speed table. The roadway is narrowed, there is a central refuge island and there are markings on the road, a long way ahead of the intersection (a zig-zag line and a triangle). All these visual clues alert drivers much more than signs alone can ever do. 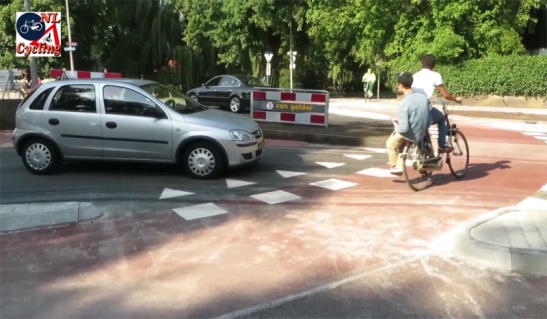 The Zwolle cycle roundabout on the opening day in 2013. Drivers and people cycling instantly understood this design that resembles a normal Dutch roundabout with priority for cycling.

The Zwolle semi-roundabout from the driver’s perspective. Again, it is very clear that crossing cyclists have priority even if you miss the give way sign. (Picture Google StreetView)

Zwolle also had a problem with a crossing of two different traffic flows. The city’s traffic experts came up with the novel cycle roundabout that featured on my blog already in 2013. After some time, this roundabout was evaluated and it was found that motor traffic flowed freely, cycling crossing times improved very much and (objective) safety did not decrease.

The Eikenlaan running east-west with the problem crossing as a red dot. Note the big main road (in yellow) running parallel to the Eikenlaan, just north of it. Why wouldn’t you close the street at the green strip that runs from north to south, right at the intersection? Motor traffic would still be able to reach all destinations using the ring road, but you would completely loose through traffic. Creating compartments in the city centre was a Groningen invention. It is time that policy was also applied to the suburbs of Groningen. (Map Google)

It would certainly help if motor traffic volumes in the Groningen Eikenlaan would decrease. This street is a local distributer street, but it is more used as a through route, a short-cut to bypass the main road. A daily volume of 12,000 motor vehicles is a lot for a Dutch neighbourhood street. There is an underused big circular road just north of Eikenlaan. Drivers should be enticed to use that road instead of this smaller street. The city does have plans to make this street a 30km/h zone, but other cities have been much bolder than that. Why not completely close the street to motor traffic? Buses could keep on using it, since there are apparently 5 bus lines on this street. An astounding number of lines, but if private motor traffic would be forced to go somewhere else even that wouldn’t be such a problem. Does closing such a street sound farfetched? There are many examples of much bigger roads that were closed to all traffic but buses, such as Croeselaan in Utrecht. That 4-lane street in the city centre was closed to motor traffic at one location to make through traffic impossible. It improved the entire street, because of the reduced motor traffic volumes.

The Utrecht Croeselaan was still a four-lane main road in 2009. (Picture Google StreetView)

The same location in 2015 shows that Utrecht closed the street to private motor traffic. Buses can still go straight-on (as can people cycling and walking) but drivers of private cars must turn right or left. Left means a 180 degree turn back. (Picture Google StreetView).

Groningen didn’t choose any of these solutions. They gave priority back to private motor traffic after just a few weeks and talk about building a tunnel. I think that would be the first cycle tunnel to cross a 30km/h street, they were after all also talking about reducing the speed, weren’t they? Doesn’t sound very well thought through. All in all this is rather disappointing for the 18,000 people who have to cross the Eikenlaan every day. The crossing was now reversed back to the former situation, which I filmed in February 2016. I will now show you that video after all.

The Eikenlaan crossing in Groningen.
The priority arrangement is back to this situation of February 2016.

Jitensha Oni anaylised this video too!

16 comments on “A disappointing pilot in Groningen”

This entry was posted on 5 December 2017 by Bicycle Dutch in Original posts and tagged Groningen, NL is not perfect.