Rain, wind and bold colours. That is Autumn, well usually anyway. This year there hasn’t been much rain (the Netherlands is experiencing a severe draught) and the otherwise normal temperature drop has been postponed too, apparently. With temperatures of up to 27 degrees in mid-October we were having a very unusual Autumn. The leaves did change colour though, even with those high temperatures and an abundance of sun. It gave me the opportunity to film people cycling wearing short sleeves and sometimes even shorts in a backdrop of the boldest autumn colours.

Young and old went for a ride on a beautiful warm autumn Sunday. This mother with her three children cycled in Vught.

My video this week is quite a contrast to some of my earlier Autumn videos but we have to go back a long time! Last year I also made one in warm sunny weather, but that time in the city. For a good old-fashioned wet version we have to go back to 2014 or even 2009! (Yes, there is an anniversary coming up!) 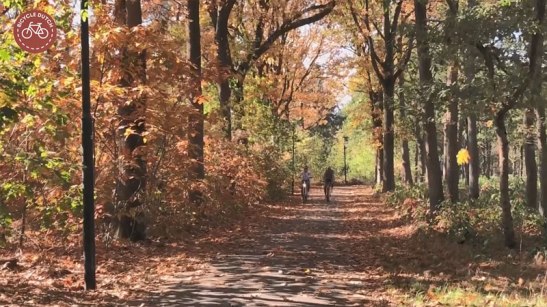 Cycling under a canopy of bright colors in Cromvoirt.

The average temperature in the Netherlands for October is 10.7C. That doesn’t mean we can’t have much higher temperatures than that, but experiencing an Autumn day with 27C is extreme. Unfortunately, extreme weather seems to be the new normal all over the world. Of course most people know and acknowledge what’s causing this, and it isn’t cycling! 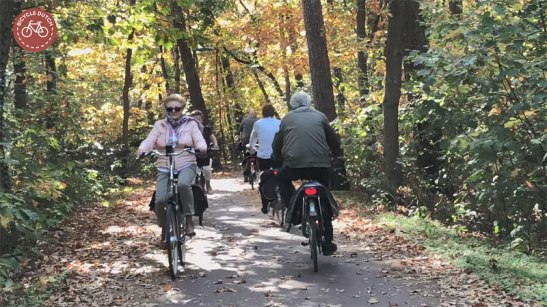 With so many elderly enjoying a ride out it became quite busy at times in the forest around Vught.

A treeline in the countyside of Berlicum.

That’s all for this week’s short post. Enjoy the beautiful images in the video that I filmed in the surroundings of ʼs-Hertogenbosch, in the forest of Vught and the countryside of Berlicum on Saturday 13th October last. It has cooled a bit since that day but we’re still not having “real” autumn weather.