Snow is becoming increasingly rare in this country, because of the climate change obviously. I did show you quite a bit of snow a little over one year ago, but the last time we had snow before that had been 2015. And yes, I do show you the snow almost every time we have it. Last night’s snow may not even qualify as “snow” to many. If you’re from a country where heavy snowfall is more common you’d probably call this a light dusting. We Dutch, on the other hand, were very exited by it and I even went for a night walk at 01:00 am to experience walking in fresh snow. There was still some of it left in the morning and the city had obviously been clearing the roads and cycle paths, like they normally do, so I decided that this was interesting enough to show you in this extra post.

There may not have been much snow left after hours of temperatures above the freezing point, but you can still clearly see that the road and the cycle paths were cleaned. (The oncoming cycleway is on the other side of the hedge on the left hand side.)

This is a main cycle route from north to south that is cleared of snow and ice. The small residential streets on either side are not and the difference is striking. The footpath on the right hand side did also not get cleared. 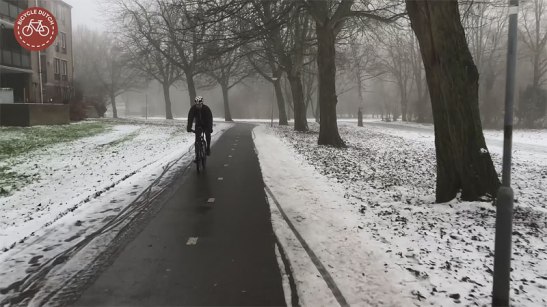 Those vehicular cyclists in some other countries, who are so against separate cycleways, should maybe talk to this guy about his experiences. Doesn’t look like he is suffering much from “being sent” to this cycleway on his sunday morning training round. A cycleway that was cleared of snow and ice.

The routes of the snow clearing vehicles do not always follow the cycle routes. Here you can see that two snow clearing routes take a turn to either side, leaving some residual snow in the middle, while the main cycle route goes straight-on. In the foreground to the left you can see that a bit of the grass next to the cycleway was hit. The drivers of the vehicles navigate on satellites, (since they can’t see where the cycle tracks are under the snow) but they are sometimes a little off.

Because the footpaths are not cleared many pedestrians chose to walk on the cleared cycleway. You cannot blame them and I doubt anybody really thinks badly about it.

This is a roundabout with priority for cycling, which is the standard in the Netherlands, although there is a decreasing number of municipalities still fighting these priority rules. The cycleway is also bi-directional, the car was stopped to give me that priority (a bit late and on the zebra crossing, but the driver did stop just in time).

That’s how well the streets are cleared of the melting snow and ice. This young man had no trouble using his skate board on the cleared cycleway.

An unusual intersection with almost no separation between the roadway and the cycleway for about 20 metres. That’s not very protected. Another disadvantage of this design becomes clear in the snow. You can see that the car wheels make a mess on the cycleway when they cross it. 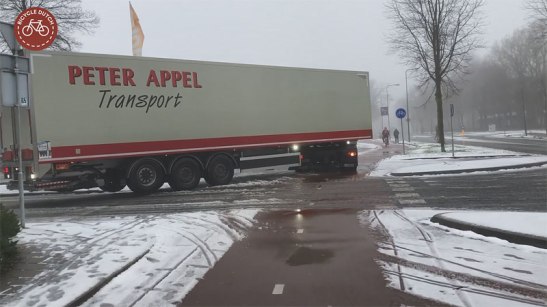 This ride was made on a Sunday morning, but this truck had just been used to make deliveries at a grocery store. The driver was backing out of the parking bay for deliveries. The driver could obviously never see me so I chose to wait until he cleared the cycleway. When the coast was clear another person on a bicycle and me crossed straight away, before the driver pulled out again. 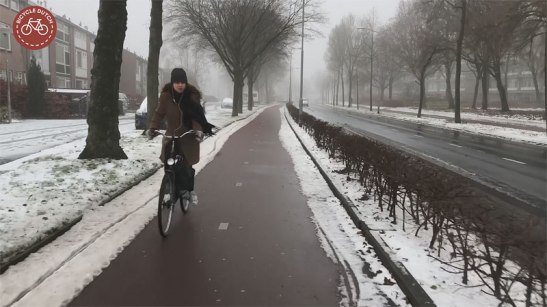 The snow is clearly not completely removed, not the full width of the cycleways I mean. The cycleway is wider than the cleared path. That is why you have to be a bit more carefull with oncoming people and when you pass other people, walking or cycling. 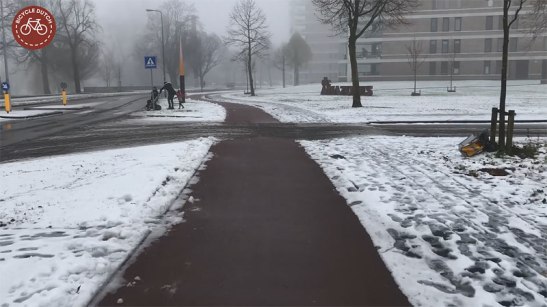 With only the roadway and the cycleway without snow the crossing becomes even clearer than usual. This cycleway is one-way at this location. There is an identical cycleway on the other side of the street.

It may seem odd that nothing is done to remove snow from the footway, but that is just how it is. Not even the bus stop is cleared. Only in the city centre some “main walking routes” do get cleaned.

This intersection in the historic city centre is the most unpleasant one for cycling in the city. The city council had decided that the bridge in the foreground would be closed to motor traffic, to improve the situation for walking and cycling here, but the current council has second thoughts and is delaying this, which angers for instance the local environmentally consious and left-wing party. The last word is not said about this yet.

After a short stretch of shared 30km/h streets the rest of the centre is closed to cars. They are kept out with these moveable “bollards”. Cycling is allowed in the pedestrianised city centre, 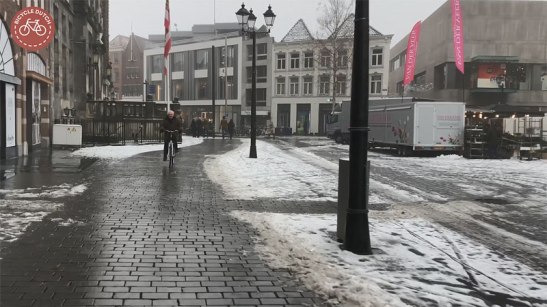 In the city centre there are a number of main walking routes. For instance from the station to the city centre, or here on the main market square. Those walking routes are cleared of snow and ice with special, smaller, vehicles. The difference to the area that was not treated is very clear.

The end of this trip at city hall near my home.

I cycled the 5 kilometres of this ride all through the city (north to south) in 19 minutes. Which means I had a very slow average speed of 16km/h. Even with the short delay for the truck to clear the way that is still a lot slower than usual. So I did cycle a bit more carefull in the winter conditions. (Map: Routeplanner Fietsersbond)

Video of this winter ride.

10 comments on “A winter ride”