No limits to the success of the public transport bicycle

The OV-Fiets (public transport bicycle) system in The Netherlands keeps on growing. “People only complain about their availability.” The yellow and blue bikes are a well-known sight in every city in the country. Years ago, when I first wrote about the system, about 835,000 trips were made annually. By 2011 the million mark was broken for the first time. That annual figure has increased dramatically and keeps increasing ever since.

A common sight in the streets of the Netherlands: the yellow and blue OV-Fiets rental bicycles.

Changes were made to the OV-Fiets system. The €10 fee for the annual subscription was abolished in January 2017. Instead, the rides were made a bit more expensive (From €3.3 to €3.85 for 24 hours). That modest annual fee still seems to have been a deterrent for many people, because the use exploded after it was no longer necessary to pay that subscription. A public transport magazine reported that a total of 4.2 million rides were made in 2018, a staggering million more than in 2017. In the first five months of 2019 over 2.2 million rides were made. Already a considerable increase compared to one year ago, when 1.7 million were made in the same period. The fleet of the OV-Fietsen is now about 20,500 bicycles on nearly 300 locations all over the country. A mind blowing increase for a system that started as a trial on just 7 stations in 2002. 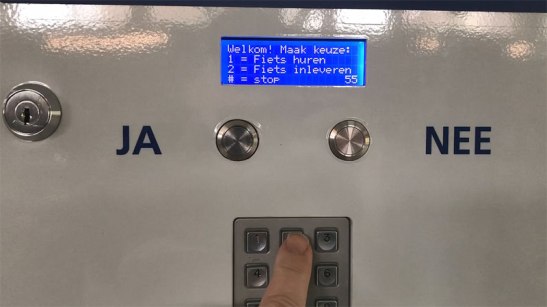 The automated system is very simple: you choose between two options: 1 = rent a bicycle 2 = return a bicycle or you use # = cancel.

When you want to rent a bicycle the key locker door opens and you can take out the key of which the ring is illuminated. (In red, the second row, most left key.)

Asked for any downsides to the system, a representative of the public transport users’ union “Rover”, which has a reputation to be very critical, had to think long and hard, a reporter wrote recently. “Well”, this person said, “one can only hope there will be more bicycles and the Railways are working hard on it. Other than that we are very content.”

If you would like to rent an OV-Fiets you can see in an app how many are supposedly still available, but when you arrive at the location the final bicycles can just be on their way. Recently I had to go to the office of the Dutch Cycling Embassy, which is a 15 minute ride from the station in Delft. Unfortunately, all the OV-Fietsen had been rented out. “It’ll take about 10 minutes for a bicycle to be returned” the warden said, and he was right. We had to wait about 20 minutes for a bicycle for my travel companion and myself. Which still meant we arrived at our destination earlier than we would have, if we had decided to walk. No wonder the users give the system an 8 (out of 10) on average with only the wish to have more bicycles available. It is very unfortunate that the OV-Fiets system only works for people with a Dutch bank account, which needs to be connected to your public transport pass. However, there are some smaller alternatives that give tourists the ability to rent an OV-Fiets, such as the Utrecht Region visitor pass. 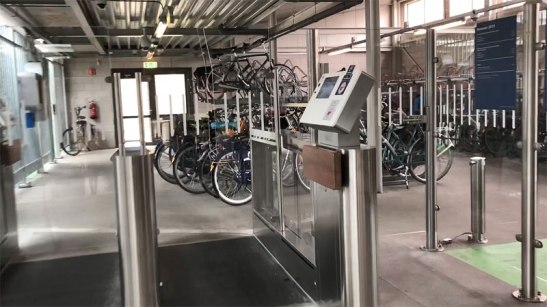 You enter the protected area with your public transport card. The glass doors are almost invisible but they are there, still closed.

Once you have the key, you find the bike it is for by matching the numbers on the key and the bicycle.

The OV-Fiets system is no longer the only shared bicycle system in The Netherlands. There have been unsuccessful experiments with free range bicycles in Amsterdam and Rotterdam. But since April this year 700 orange bicycles of Donkey Republic can be found in Utrecht. (They are also available in Rotterdam.) Utrecht also has a shared bicycle system aimed at university students. All over the campus and the nearby railway stations 200 USP Campusbikes could initially be found, another 500 bicycles will be placed this summer. The Utrecht University joined forces with many other parties, in a national research program, of which these shared bicycles are a living lab. The study investigates the role shared bicycles could have in creating a healthy and liveable city.

A slightly different type of rental bicycles is the Swap Fiets system. Swap Fiets offers bicycles for a longer period, advertised as “always a working bicycle for a fixed monthly fee”. A fee of €14.50 for a student to be precise. The lease bicycles with the iconic blue front tyre are a very common sight now, especially in the cities with a large student population. The company started in 2014 and reached the 100,000 customer mark in March this year. Recently, I witnessed how the new shop in ʾs-Hertogenbosch was opened by the alderman for traffic. The Swapfiets system is so successful that it has been affecting the market for second hand bicycles, people now claim. Swapfiets is now ready for the step to go to other countries. They have just launched their international campaign.

Swapfiets is also available in Denmark, this is in the city of Odense. Picture MigoOdense.

OV-Fietsen are handed out by wardens in the larger train stations, but in many towns the system works fully automated. For this week’s video I filmed how I can rent (and return) the OV-Fiets in Culemborg. The rental process takes seconds only, making it possible to be out of the train and onto a bicycle in just two-and-a-half minutes.

Renting an OV-Fiets (Public transport bicycle) at the automated station in Culemborg.

This entry was posted on 24 July 2019 by Bicycle Dutch in Original posts and tagged bike-share, Culemborg, OV-Fiets.