Guest contributions have been rare on my blog in the past 10 years, but there were a few. Sometimes people filmed for me and sometimes I chose to publish other people’s work. Today is the first time I publish a post someone wrote especially for my blog. Ralph Marrett is an expat living and cycling in the Netherlands. Although he came from one of the only two countries in the world where there is a mandatory helmet law for all people on bicycles, he told me he respects and adopted “the ‘Dutch way’ with helmets”. He also has – as he puts it himself – “some qualifications relevant to the calculations” in his piece, “which”, he added “are hardly complex”. As a Dutch person I am always completely surprised by people who genuinely believe that wearing bicycle helmets would do any good. I absolutely do not, on the contrary, it is my conviction that wearing helmets during everyday cycling would do more harm than good. The vast majority of cycling experts in the Netherlands agrees with me. Ralph has a possible explanation for my helmet view and that of the Dutch in general that I rather like. You can find what he writes between the two double lines below. 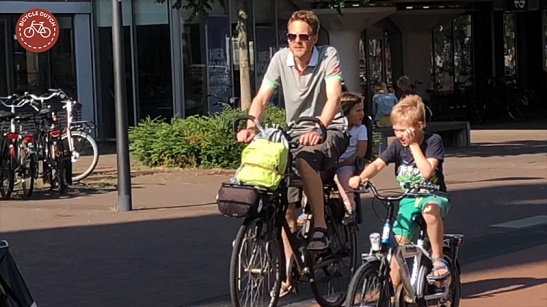 Generally, the Dutch, or their children, do not wear helmets for everyday cycling.

I am a New Zealander, and I have been living in the Netherlands, in Amersfoort, on and off, for about three years now. I have a bike here, of course, and I have no car. So all my transport options at least begin with my bike, even if, in the end, I catch a train, hire a car, catch a plane, or whatever. For me here, as with most everyone else in this beautiful country, life outside begins and ends on a bike. And life is good.

And then, recently, my daughter rings me from Auckland, at one of those times we are both awake, to tell me, with some excitement (shared, of course, by me!), that she and her beautiful family are coming for a visit. The occasion is the BMX world championships in Brussels, in which their eldest son, twelve years old, is competing. Omg! I can’t wait.

So I start thinking about the various transport options for their short visit to Amersfoort. I know they will love to experience the place the way everyone does, on a bike. Among many things I would love them to see: the bike-friendly infrastructure, the respect shown to riders by car drivers, and the lovely forest that begins, for me, at Nimmerdor, outside my front door, and extends NW to SE for some 30km.

Of course, since their kids are in the bike racing game, they are all diligent when it comes to wearing bike helmets. It is, in fact, the law in New Zealand, as in a number of countries now, that when you ride a bike you must wear a helmet. And the question has come up a number of times, and sometimes the conversation can get quite heated…

And the last thing I want, when they are here, is heated conversation! Because, like all my neighbours and friends here, I don’t wear a helmet. I don’t even own a helmet! And I am clearly going to be a ‘bad example’ for their kids. I get that. But I am one of thousands. And I am here, in the Netherlands, as a guest. So I feel, at least, I should honour and understand the culture I am living in.

Of course, a lot of bike riders here do, indeed, wear helmets. Basically, if you own a fast bike and are reasonably serious, riding it at some speed, perhaps for exercise, or for the challenge of experiencing different ways, different tracks, or simply for the sheer joy of experiencing your beautiful machine as an almost seamless extension of your body, you are aware that there is an associated danger. All may not go perfectly. And so you wear a helmet.

But what about the rest of us? Are we ignoring the obvious? What about the ‘huge reduction (eg. 52%[1]) in brain injuries’ that occurs when helmets are worn? Why do we, why do the Dutch, ignore these things and continue to go about our business as if the reduction in brain injuries is not a big deal – after all we are going to be riding bikes for our whole lives…

Well, just maybe, the Dutch intuitively understand something that the rest of the world appears to be missing…

It turns out that, assuming everything else stays the same, the reduction, for example, in the likelihood of traumatic brain injury expected if a helmet is worn over a whole lifetime of riding a bike is.. ‘rather less than 2 percentage points.’ And this is ‘assuming everything else stays the same’－in particular that wearing a helmet does not make an accident more likely, for example by impairing riders’ hearing, or limiting their awareness of their surroundings, or by adversely affecting the behaviour of bike riders or the surrounding traffic, even by what might seem to be a fairly small amount.

To understand the numbers, check out a recent paper available on the internet[2]. We get the following:

So which is correct? Does wearing a helmet reduce our chances of a brain injury by 52%? Or does it reduce our chances by just 1.5%? It’s really all in the terminology, and the difference is probably easier to see and interpret if we draw a couple of graphs:

The red line is the same graph in each plot, produced by computer (despite the ‘hand-drawn’ look!). Both graphs are truthfully labelled. The first plot, with vertical scale from 1 to 4%, shows what most people think when they read that there will be a 52% reduction in traumatic brain injury. The second plot, however, with scale 0 to 50%, also implicitly includes the information that traumatic brain injury is not very common in the first place.

So, to return to the Dutch. Unlike most of the rest of the world, essentially all Dutch people ride bikes, and of course all their friends and relations do too. So they actually understand the ‘big picture’ of bicycle riding in the Netherlands. The picture on the right more closely represents what they know and understand than the picture on the left.

And more than that, they do understand when wearing helmets really is worthwhile and not counter-productive, and then they wear them! So I think, for the Dutch, the current law is completely appropriate.

And I do hope my daughter’s family will understand and appreciate their collective wisdom! 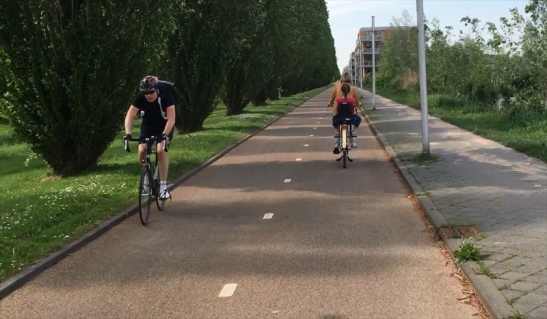 Some people who race in the Netherlands do choose to wear a helmet. To the Dutch these people are then no longer cyclists, they have become bicycle racers instead.

This entry was posted on 5 August 2019 by Bicycle Dutch in Original posts and tagged Amersfoort, figures, guest contribution, helmet.