The city of Joensuu was host to the international Winter Cycling Conference 2020. With temperatures as low as -13 degrees and weather conditions ranging from sunny clear blue skies to fresh snow the 170 delegates really got a taste of what a Nordic winter is like. With such conditions it is easy to embrace winter and I think most delegates did, also on a bicycle.

Fresh snow is shoved to the sides and the remaining crushed snow on the cycleways makes it easy to keep cycling in the winter in Joensuu.

Joensuu’s roundabouts, with a separate ring for cycling in both directions, looked very familiar, even in the snow.

The city of Joensuu, a small university city with about 76,500 inhabitants, provided me with a bicycle with studded tyres. Whenever the conference allowed I went out into the city to explore its streets and parks. The city was founded in 1848 by Czar Nicholas 1 of Russia, when Finland was an autonomous Grand Duchy in the Russian Empire. The original street pattern with straight streets forming blocks of housing is still exactly the same, but the type of housing has completely changed. Only very few original wooden one-family houses remain, most were replaced by apartment buildings with 3 or 4 floors. That means that the same street pattern in which about 7,000 people lived in the 1950s, now houses almost ten times as many. Cycling takes place on the sidewalks mainly. Signs inform people on which sidewalk it is allowed and on which it isn’t allowed to do that. That is not a very intuitive system for an outsider, but it grows on you. In the more recently built infrastructure there is more distinction between cycling and walking. Red asphalt is used for that newer cycling infrastructure, which was obviously not visible under the snow. The most recent addition to the cycling infrastructure is a cycle street modeled after the Dutch ‘Fietsstraat’. In that street people cycling should use the central roadway and they did.

This cycling and walking bridge to connect a developing new neighbourhood to the rest of the city was constructed in 2014. It is beautifully lit at night. On the other side of the bridge you can see Finland’s tallest wooden building with 14 storeys of student housing.

In Joensuu big tractors plough fresh snow to the sides, leaving a compact, crushed layer of snow with grooves; marks that the tractors leave. The grooves and the added grit make that remaining layer of snow less slippery and really good to ride on with your bicycle. Salt would not work (well) in the temperatures Joensuu normally has. Cities like Helsinki, where the temperature can go slightly over freezing point, also in the middle of winter, have the trouble that the snow then melts and freezes again in the night. That leads to ice all over the surface which is very slippery. In those conditions studded tyres are necessary to be able to keep riding.

Well-used bicycle parking racks at the university of Joensuu. 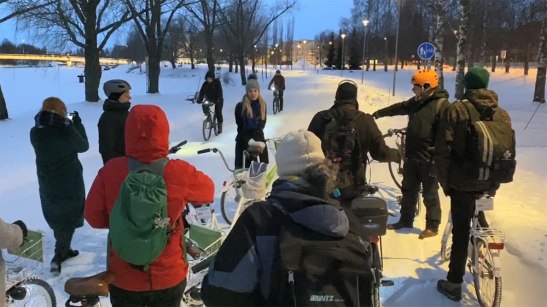 A guided tour in a Joensuu park at -11 degrees.

Joensuu experiences climate change too now. In the week after the conference the temperatures did go over zero and the locals complained about slush on the cycle paths. None of that during the opening session at a primary school in the centre of Joensuu. With a temperature of -13C (8.6F) it was refreshing to see the children play on swings and running up and down snowy hills as if that was absolutely normal. And it is, for these kids that is their normal. For the congress opening the 5th graders (12-13 years-old) were asked to come to school by bicycle for a workshop. An obstacle course was set up for them to test ride their bicycles in different snow conditions and a game was organised so they could learn that you can include your bicycle in play. After the children had finished the delegates had a go at the game and the course and I can tell you that it is quite something for a Dutchy to ride down a snowy hill of a couple of metres high! The well-used bicycle racks around the university proved that once you start riding young a lot of people will keep on riding their bicycles when they are older. 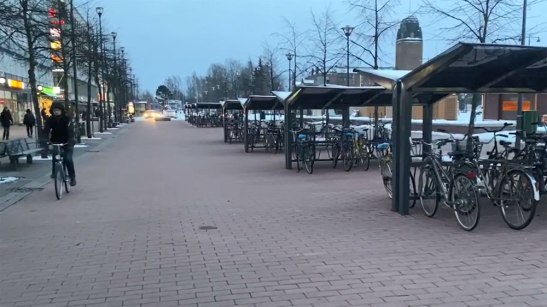 This pedestrianised shopping street in the city centre of Joensuu is heated with industrial rest heat. Warm water runs through pipes in the surface keeping it clear from snow and ice. There is ample parking for people who come shopping by bicycle.

My presentation on the main stage of the conference. Still from a short video by Elina Lämsä.

Two streets in the city centre of Joensuu were not like any of the other streets. They were completely clear of snow and ice without a trace of salt. That is because those streets are heated with industrial rest heat. Pipes with warm water under the surface keep this shopping area clear of snow. That is an expensive system but it was implemented after the streets were redesigned when they became car free around 1998. While that can be very practical I noticed that I kept far away from those streets. I even went around them if it prolonged my cycle trip. It felt almost like cheating to go there…

Many bikes lined up for the tour in Helsinki at the pre-conference meeting.

At the request of Herbert Tiemens from the city of Utrecht I used the ‘sniffer bike’ device to measure the air quality during my ride in Helsinki.

Many presentations and discussions in the conference seemed to have one overarching theme: infrastructure. If you want a good part of your population cycling you need to provide good infrastructure. When one organisation emphasised Hi-Vis and helmets as the answer to make cycling safer for children they got some criticism from the audience. Especially when they claimed helmets are required for Finnish children. They are not. The wording in the Finnish law is very ambiguous stating “one should usually wear” which means you can never be fined for not wearing one. 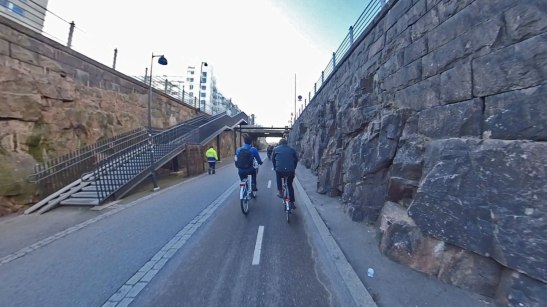 Cycling on Helsinki’s famous ‘Baana’. A separate cycle route through the city centre on an old railway track. To get out of this trench stairs with ramps were built at several locations.

I filmed 20 minutes of the two hour ride in Helsinki.

Infrastructure was also the theme in Helsinki where there was a meeting one day before the actual congress. Helsinki was completely snow free which is very unusual for the time of year. Helsinki is a city in transition. The shared cycling/walking infrastructure they had for a long time is no longer seen as future proof. Reason for Helsinki to build new, separated infrastructure for cycling. When the city showed the map of cycling infrastructure it didn’t even include the shared facilities because they are inadequate, much to the surprise of a North-American delegate. That transition does cause some learning difficulties. When people are so used to walking and cycling in the same space they sometimes walk in the new separate cycling paths feeling they are allowed to. One such individual was not planning to move away from the path in front of the central station, not even when a dozen delegates on bicycles behind her were ringing their bells.

The large bicycle parking garage under metro station Kalasatama (Fiskehamnen) in Helsinki has just been completed but needs to be found by the public. It has Dutch double stacked bicycle racks.

Helsinki studied the Dutch requirements for good cycling infrastructure but wonders what they mean in their Nordic climate. You always have to translate examples from other places to your own situation and conditions.

In this transition Helsinki also looks at the Netherlands, not only when building indoor bicycle parking garages with double stacked Dutch bicycle parking racks, but also when it comes to writing policies. The city officials do ask the right questions when studying Dutch policies. “Attractiveness and comfort” what do these terms mean in the very different seasons of a Nordic country? Helsinki is already doing something right. The city could report that in 2019 no pedestrians or cyclists died, which was for the first time since 1960.

The Winter Cycling Conference heads south for the next edition. The province of Limburg and its capital Hasselt in Belgium are the host for the 2021 conference and they already opened their website! That is the province with cycling through the trees and water which I showed you earlier on my blog. Limburg is a place with a much milder climate so other issues can be addressed there. These issues could possibly be even more interesting for delegates from neighbouring countries such as France, Germany and the United Kingdom. The Dutch delegation in Joensuu was already making plans to cycle to that next conference!

My video about the Winter Cycling Congress 2020 in Joensuu, Finland.

Some publications about the congress and or Joensuu:

This entry was posted on 19 February 2020 by Bicycle Dutch in Original posts and tagged conference, Finland, Helsinki, Joensuu, snow, Winter.