Veenendaal is Cycling city 2020 of the Netherlands

Veenendaal was pronounced Fietsstad 2020 (Cycling City 2020) last Friday. The result of a national survey, in which over 45,000 people answered 26 questions about the cycling climate in their home town, was made public on a congress which was also organised by the Cyclists’ Union (Fietsersbond). The municipality of Veenendaal had already won the title before. This was the 8th time the Cyclists’ Union organised the competition. Veenendaal also won the first, in 2000. Veenendaal shares this honour with the municipality of Houten, which also won the title twice, in 2008 and 2018.

The delegation from the municipality of Veenendaal happily accepted the sign with their title at the congress in Utrecht.

This year’s winner Veenendaal is a town in the south-east of the province of Utrecht, in the centre of the Netherlands, with a population of 65,500 people. It is one of the three larger towns in the so-called Bible Belt, a strip of land in the Netherlands with the highest concentration of conservative orthodox Calvinist Protestants. Since Veenendaal had already won the title in 2000 it had attracted some foreign visitors before. This is a picture post by Mark Treasure and some tweets from Hackney Cyclist. To find this year’s Cycling City, the general public in the Netherlands could answer a questionnaire about the cycling climate in their own municipality. For Veenendaal 1,413 people did that. Those answers were categorised in five (subjective) criteria. The results of these criteria count twice in the end result. This means the opinion of the people answering the questions weighs heavily in the end-result. The rest of the total score was calculated by adding the scores of four objective criteria, which leads to an end-score and a ranking. Only the top 100 municipalities are publicly ranked. The ranking of the lower two/thirds of the municipalities (there are 355 in the Netherlands in 2020) have not been made public. 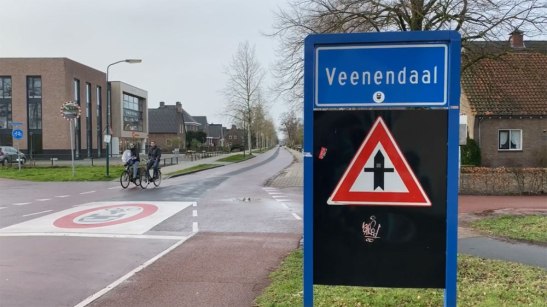 One day after the announcement I visited the town to make a portrait and to find out what made the residents of Veenendaal so happy with their cycling climate. 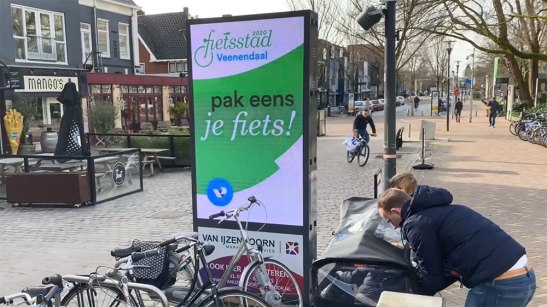 “Cycling City 2020 Veenendaal. Get on your bicycle!” This digital kiosk was already updated one day after the title was won!

It is the second time that the competition was determined by this system and that seems to lead to some remarkable effects. Amsterdam, Utrecht and Groningen – also abroad well-known good cycling cities in the Netherlands – don’t even make it to the top 100. This was also the case in 2018 when I was a member of the jury and I remember getting a lot of questions about that. The local press also noticed this and one Amsterdam newspaper even calls the comparison ‘false’. So let me try to explain this. If you look at the categories it is understandable that comfort and perceived safety would score better in smaller and less busy communities but if you look deeper there is also a category called “Urban Density”. You would expect larger cities to have a better urban density score, but that is not the case. The opposite is true, most of the smaller towns I checked have a better urban density score. When the jury asked last time how this was possible, the answer was: “Because this isn’t a comparison between smaller and larger cities, rather, the density is compared between municipalities of a similar size.” Even so, it still feels a bit strange that the density score of Amsterdam and Utrecht is so much lower than Houten or Veenendaal, which – to me – feel a lot less dense, but this is the system the Cyclists’ Union chose. 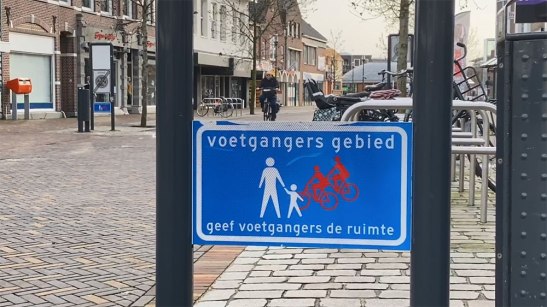 “Pedestrian zone, give pedestrians room”. Cycling is permitted in the pedestrianised town centre streets of Veenendaal. This is a new version of a sign indicating that, for me. 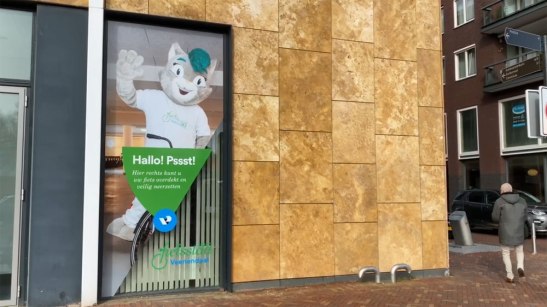 “Hello! Psst! You can park your bicycle covered and safe just around the corner here.” The mascot telling the public this was in Utrecht when the title went to Veenendaal.

To give you an idea about the figures and why some of the results may seem a bit unexpected, I made a table with an admittedly small excerpt of the total results. I mention the scores and rankings of all previous winners and the four largest cities in the Netherlands. As mentioned earlier, the four largest cities and even a previous winner and generally acknowledged good cycling city as Groningen do not make it to the top 100 of the country in this system in which you get marks from 1 (worst) to 5 (best). 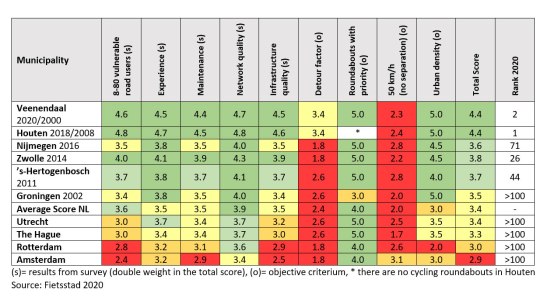 Comparing previous winners and the four largest cities of the country it is clear that there is a big difference between the smaller and bigger municipalities. The latter don’t even make it to the top 100 for the most part. I translated the questionnaire in English.

8-80 – Vulnerable road users (survey)
A scale that tells something about how it is to cycle in this municipality as a more vulnerable cyclist, think of 8-year-olds and 80-year-olds.

Experience (survey)
How do people experience cycling in this municipality, is it stressful or relaxed to cycle here?

Maintenance (survey)
Is the infrastructure well maintained? Think of aspects such as drainage and potholes in the surface, but also snow clearing and the removal of leaves.

Network quality (survey)
Is the cycling network chosen logically, can you easily find your route and are there not too many detours?

Infrastructure quality (survey)
How is the infrastructure management, is there sufficient comfortable pavement, are there enough good quality parking spaces?

Detour factor (objective fact)
If we plan trips from a central point to points that are 1 km away as the crow flies, how much more should we cycle than that one km?

Roundabouts (objective fact)
Are the roundabouts in the municipality designed to give cycling priority over motor traffic? (Which is recommended by the national Goverment.)

Separation on 50 km/h streets (objective fact)
What percentage of the 50 km/h roads within the built-up area does not have separated cycling infrastructure? (Which goes against Sustainable Safety policies.)

What seems to be measured most in this system is whether people are happy with a number of chosen aspects of the cycling climate in their town. In towns with a generally content population the scores will be better. In busier cities there will always be a larger contingent of people who fear for the safety of their children and the elderly, giving these larger municipalities a disadvantage that may be too large to be fair. On the other hand, the band width of the scores between number 1 and 100 is small. Number one was Houten with a score of 4.43, whereas number 100 (Geldrop-Mierlo) had a score of 3.54. It may well be that so many municipalities in the Netherlands have an outstanding cycling climate that it is very hard to rank them in a clear ad objective way.

Veenendaal had the third highest score for the question about smooth surfaces. But I found many paths like this one with a surface of concrete tiles; maybe even more than in other municipalities scoring lower. Apparently the people in Veenendaal feel this is smooth enough.

Fortunately, there are also modern bi-directional cycleways in Veenendaal which do have a really smooth surface of red asphalt.

Another striking fact is that Houten actually came in at the highest position again. But this municipality was kept out of the end ranking for being the title holder. This means that Houten topped the list for a third time in 8 competitions (with at least three different ranking systems of reaching that conclusion). Apparently Dutch opinions as well as the objectively measured facts are rather stabile over time. Asking the same questions again in future might make a further competition a bit less exiting. Maybe someone has a trick up their sleeve to change this. I myself find it a pity that cities with unique cycling policies such as Nijmegen (winner 2016), with daring innovations such as Zwolle (winner 2014) or cities with completely unique pieces of infrastructure such as Utrecht (finalist 2016) no longer seem to have a chance to win the title in this current system. Reintroducing a jury – with some room to form their own opinion – may help.

Veenendaal is one of the bigger towns in what many Dutch call the bible belt. But even in Veenendaal some churches have been abandoned. This former church has become a grand café.

All that doesn’t mean that Veenendaal isn’t a worthy winner, it is. The title is well-deserved. The municipality has a complete network for cycling of a good quality and the maintenance is on a high standard. There is ample bicycle parking and sometimes the bicycle even gets an advantage over motor traffic. It is absolutely clear that Veenendaal didn’t rest on its laurels after the award in 2000, much of the infrastructure was a lot more recent than that year. Veenendaal is understandably very proud of their second title. One day later a -digital- kiosk already showed winning it in the street. And the mascot, which accompanied the town’s delegation in Utrecht where the title was announced, was already visible on the wall of one of the town’s excellent indoor bicycle parking facilities. I can only hope all this inspires council members in municipalities which don’t do quite so much for their cycling citizens to do more in future. This local newsagency in Zaandam already tried to explain their own bad score, so that is hopeful.

A video portrait of Veenendaal, Cycling City 2020 of the Netherlands

4 comments on “Veenendaal is Cycling city 2020 of the Netherlands”

This entry was posted on 4 March 2020 by Bicycle Dutch in Original posts and tagged Cyclists' Union (Fietsersbond), Fietsstad, Veenendaal.