The fast cycle route from ʼs-Hertogenbosch to Waalwijk is part of the elaborate system of (planned) intercity cycling routes in the province of Brabant in the South of the Netherlands. This particular route has been on the wish list and it has been in planning for a very long time now, but it is hoped that it will be finished by the end of 2022. Does that mean the route has to be built from scratch? Not at all. You can already cycle comfortably from ʼs-Hertogenbosch to Waalwijk but it will become even better. I will show you in this post how the situation is today. 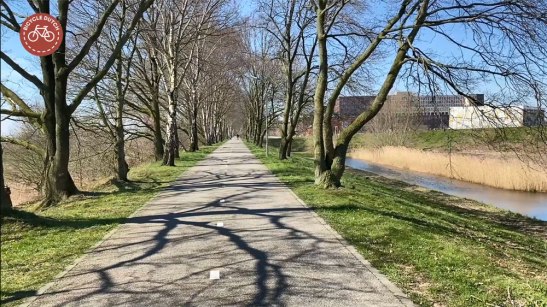 The future F59 from ʼs-Hertogenbosch to Waalwijk. This part -on the former railway line near the city hospital in ʼs-Hertogenbosh- is almost up to the standards; 4 metres wide and lit at night. Only the colour of the asphalt should be red. 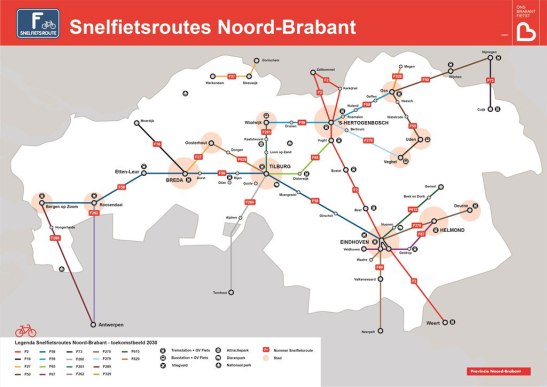 Map with all the desired intercity cycle routes in the province of Brabant. This is what the network could be like in 2030.

Projects of this size (and with so many different authorities involved) take a long time. In 2012 the Cyclists’ Union believed the route could have been finished in 2016 but that was not the case. Many steps have to be taken. Some examples: there was a report from 2016 which explored the potential. This led to a report from 2017 to explore the implementation possibilities. I expect more reports to follow until the route will finally be built. One major step was the public signing of the agreement in 2018 by representatives of the four authorities involved; the Province of Brabant and the three municipalities of ʼs-Hertogenbosch, Heusden and Waalwijk respectively. This was when the general public learned that this 18 kilometre long route will be built for an estimated €15.6 million, of which the province will cover €9.2 million. Interesting about this route is that it has become part of the overall zoning plan for this region which looks at many topics such as: trade and transport, mobility, accessibility, traffic, traffic safety, noise, air quality, emissions, health risks, external safety, liveability, nature, nature reserves (Natura2000 areas), connections between ecological zones, endangered and protected species, landscape, cultural history, archaeology, important visual elements in the landscape, water quality, etc, etc. It is very positive that this main cycle route got to be part of such an elaborate zoning plan, because it means it is taken seriously by the authorities. On the other hand it also means that when just one element of the zoning plan is delayed, building this route is also postponed.

At this point in Vlijmen the preferred route turned left to follow the dirt path to the former railway line in the distance. 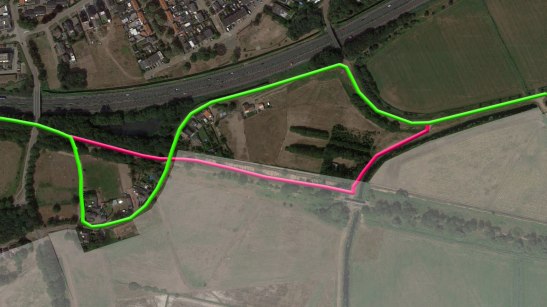 Unfortunately that would take the route just inside the Natura2000 nature reserve Moerputten and that is not allowed. Due to level changes and a projected road with roundabout the route will therefore take the green line, although that is less direct.

However, the route does not have to be built from scratch. To investigate what the current state of it is I cycled the route last week. The route starts at an area that used to be a main traffic square but has since become a field with grass. It then mainly follows an abandoned railway line that was in use from 1888/1890 until 1950. The last train used the tracks in 1972. This line is very straight and would provide the shortest route possible. Unfortunately, part of it near ʼs-Hertogenbosch is now inside a Natura2000 protected nature reserve the Moerputten and that means that this part cannot be converted. The detour around this area was already finished in 2012 and I showed it then. One of the exceptional elements in that nature reserve is the 600 metre long former railway bridge to cross a swamp. It was impossible to build a dam in the 1880s because that would have meant ʼs-Hertogenbosch would flood. The bridge is now restored and even though the main cycle route won’t be using this bridge, you can sometimes cycle on it.

Cycling into the sunset. The 600 meter long former railway bridge “Moerputtenbrug”, not for cycling actually, but I was alone. ‘s-Hertogenbosch, Netherlands. pic.twitter.com/kqXndbdxfy

Connecting that existing main cycle route to the old railway line in Vlijmen is one of the bigger challenges. The most logical connection was not possible because that would be on the exact border (but just inside) the protected area. With al the dikes on different levels and a projected road and new roundabout in the same area the puzzle was not easily solved. Lengthy (and costly) overpasses and even a tunnel were considered. In the end it was decided that the only feasible option was to follow the zigzagging existing dike and turn that into a cycle street. The rest of the route (further west) can much more easily follow the old railway line. It runs parallel to the A59 and that is why this cycle route will get the name F59. It will connect to the existing fast cycle route with that same name that runs east from ʼs-Hertogenbosch to Oss and that was officially opened in 2016.

The dotted line represents a new cycleway, according to the standards that will replace the too narrow cycleway that exists at this location around a fuelling station.

The present cycleway around the service station is too narrow. The new cycleway will be built on the other side of the ditch on a strip of land the municipality bought for that purpose.

Other relatively minor problems had to be solved. For instance in Drunen where the existing cycle path becomes very narrow around a service station. The municipality had to buy land to be able to achieve the required width for the main cycle route of 4 metres. The cycle route will be built on that newly acquired strip of land.

This overpass was built in 1975 with already some extra width for a future road or -now- a fast cycle route.

At the moment there is only a narrow dirt path right next to the motorway A59 (right).

Almost none of the existing cycling route already has that required width. So even while the route seems almost finished it is not. In the table below you find the main requirements.

This type of infrastructure looks quite okay, but it doesn’t meet the requirements. There is street lighting but this cycleway isn’t at least 4 metres wide, nor does it have a smooth surface of red asphalt.

Just before the route reaches Waalwijk it runs through another nature reserve called the Baardwijkse Overlaat. This wet area also had to be crossed by an enormous bridge. This one was even longer than the one in Moerputten. Unfortunately the over 885 metre long bridge was severely damaged in World War 2. Instead of repairing the bridge after the war the missing railway parts were reconstructed on a dike, parts of which were already constructed from the 1920s. The longest remaining part of the bridge is now 165 metres long. Inside the dike the original bridge pillars still exist. As part of reconstructing the nature reserve the plan is now to remove this earthen wall to open up vistas in the area. A new bridge, with the required width for the cycle route will be built on the pillars for the second railway track that was never constructed. IPV Delft have won a competition with their design for this bridge. The plan to remove the dike is controversial. The locals are very attached to the dike. Even the Cyclists’ Union is against removing it, because with it the trees and shrubs on it will disappear and people cycling would be much more exposed to the elements, especially the wind. The cycle route here has existed since 1991.

The former railway bridge in the nature reserve Baardwijkse Overlaat is too narrow. On the pillars to the right a new bridge will be built that does meet the requirements.

The same bridge as it will look (from the other direction) after the bridge has been converted. This design is from IPV Delft and so is the rendering.

The final part, in the built-up area of Waalwijk, has nice red asphalt but even here there is room for improvement. Just two weeks ago the local press announced that before the end of 2020 this part will be reconstructed to meet the requirements of the fast cycle route. This mainly involves removing central traffic islands with poles near the signalised intersections. 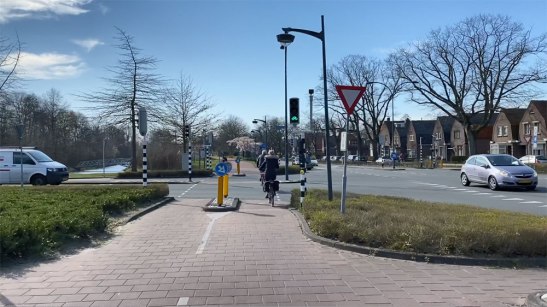 In Waalwijk the route will be updated later in 2020. Central islands such as this one are unsafe according to the latest recommendations. They will be removed.

Even though the route seems finished, it will be a challenge to build to missing parts, widen the existing parts in their entirety and make sure there is a surface of red asphalt everywhere and also street lights before the end of 2022. Until then we can use the alternative routes, one of which I showed in 2016. I also filmed the existing part in Waalwijk in 360 degrees now.

This week’s video about the fast cycle route F59 from ʼs-Hertogenbosch to Waalwijk.

360 degrees ride on part of the F59 in Waalwijk in the direction of ʼs-Hertogenbosch.

The same ride on part of the F59 in Waalwijk in the direction of ʼs-Hertogenbosch
as a “normal” video.