What does red asphalt look like after many years of use?

One thing that keeps impressing people is the state (and colour) of the surfaces of the cycleways in the Netherlands. The bright red colour of fresh cycleway asphalt stands out in a very positive way, but how is that same asphalt years later? Does it stay so nice? Now that I have documented my own cycling environment for over a decade I can better assess that. I have images of when the asphalt was rolled out and I can have a look at it now. I will share with you what I found in this post.

This cycleway was constructed in 2011. It had been a service road before, with a surface of brick (pavers).

The same location in 2020 and the nine year old asphalt is a bit less colourful, but just as smooth as the day it went in.

When I cycled in the city the other day I almost subconsciously noticed that the asphalt on the path I was cycling on was so nice. It was smooth, there were no cracks, no potholes, no repairs, and at the same time I realised that I had documented the construction of that very path and I could therefore find out how long ago that was. At home I looked it up and the asphalt on this path turned out to be six years old. I had a further look in my archives and found more footage of asphalt being laid down. As it turns out, even nine year old asphalt still looks fresh and almost new. Time to look into the surfaces of cycleways!

Vlijmenseweg in ‘s-Hertogenbosh in July 2012. At that time it still had the concrete surface of 1936. In October 2012 the road and the cycle tracks were resurfaced and the 76 year old concrete was finally replaced.

The early cycleways in the Netherlands were constructed alongside national, state governed roads. In the 1930s these roads were built in concrete, both the carriage way and the cycle ways. Some examples of these paths survive to this day, but most have been reconstructed. Either the road is no longer state owned or the roads became motorways (freeways) and the cycling infrastructure has got a new route. From the 1950s cycleways began to appear in the municipalities and concrete tiles were the normal way to pave them. This was custom until the 1990s but some municipalities still use these tiles today. They are cheap and can be reused (you can repave the path with the same tiles). But the tiles become uneven quickly and the surface is not very smooth. It was in this ‘tile-era’ that the colour red was introduced. That became custom after the demonstration route in Tilburg in 1977, where that colour was chosen to make the new main cycle route stand out. 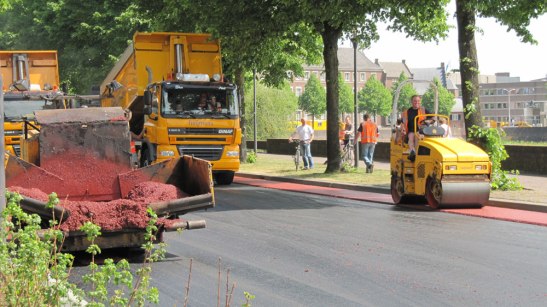 The Parklaan in ‘s-Hertogenbosch got a new top layer of asphalt in three parts with two colours in 2011. It was all done in one continuous flow on Mother’s day.

From the 1990s asphalt became an option for cycleways. This was the time that the existing cycleways, that had been street-by-street solutions up until then, were modernised and road managers started to see the paths as part of a network. To make that network more attractive a surface of asphalt was a good and cost effective measure. Most new cycle routes got asphalt from the beginning, and when streets were getting their long term maintenance (roughly once every 30 years) the surface was often replaced by asphalt. Some larger cities now are finishing that conversion process, such as The Hague. Following the Tilburg example, the colour red was introduced as the colour of choice. This makes clear what part is cycleway and what part is roadway. The Dutch were used to a different look of the two. Originally that was the difference between asphalt and tiles. Having them both look the same (with a surface of black asphalt) would have been new and confusing. Black asphalt is sometimes used for cycleways, for instance where it is very clear which is which. This is usually to reduce cost, because red asphalt is about 40% more expensive than the black version (but only for the top layer). Very few municipalities do not use red at all. When the municipality of Wijchen (near Nijmegen) announced it would stop using red altogether to save money they got a lot of negative response. Also from people who calculated that the savings would not measure up to the reduced clarity and thus safety on the roads.

The colours were very dark the day the asphalt was put in. Only hours later the lines were painted on and the street could be used.

The colours changed quite a bit in nine years. Even the black has turned much more grey, but the surface is still almost undamaged and very smooth.

When choosing a type of surface the CROW manual advises road managers to look at the following criteria:

It is interesting that skid resistance and rolling resistance seem to be a contradiction. You want a smooth surface, but not a slippery surface. The trick is to find a surface with a perfect balance between the two. A surface that is smooth enough to let people cycle without too much energy, but that at the same time lets them brake in time and doesn’t make them slip in curves.

Especially for the latter it is important to consider that the surface will not only carry cyclists but also (winter) maintenance and emergency vehicles. Heavy motor vehicles crossing the cycleway shouldn’t damage the surface on those crossings and that also goes for vehicles accidentally (or wrongly) driving on the surface of the cycleways. With regard to maintenance the presence of pipes and cables under the surface can be a factor. If you need to access those an asphalt surface will be damaged, whereas a surface of tiles can simply be reused. A solution can be to relocate such underground infrastructure under the tiles of the footpaths.

Research shows that people cycling in the Netherlands like asphalt most. The evenness of the single surface (there are no noticeable joints) is the most important factor here. Asphalt will not be damaged at all by people cycling. The only damage that can occur is either caused by heavier vehicles on the path or trees that uproot the surface and edges. A proper foundation is the remedy against both. Cement concrete is also appreciated by most road users, but it used to be less cost effective and the noticeable joints can lead to unevenness. That doesn’t mean there are no new cycleways in concrete. Some road managers do like and use that material. One of the more recent developments is red concrete! The traditional concrete tiles have even more joints and can very easily become very uneven. Pavers or paving bricks are often used in a historic environment such as city centres. They are also used as a speed reduction measure in residential streets. For motor traffic they signal that an area is a 30km/h zone. These bricks can become relatively more slippery when wet or especially when icy. Bricks are smaller than tiles so there are even more joints. This can be a disadvantage, especially when after years the stones start shifting and the joints become bigger. Pavers are never a good option for a main cycle route.

I am glad we use stencils in the Netherlands for the bicycle symbol. Other countries paint them by hand. That is stunning to watch, but then they are never quite the same.

The white paint did fade a bit after nine years, but the bicycle is very much recognisable.

With all these considerations, red asphalt has been the material of choice for most (main) cycle routes since about the 1990s. More recently that colour is also used for cycle streets, to signal that that is the domain of cycling. That doesn’t mean it will always stay that way. Road managers and suppliers do experiment with other materials. That doesn’t always lead to good results, such as the solar cycle way, but there are promising developments with environmentally friendly concrete and even recycled plastic. The “plastic” cycleway in Zwolle was already used by one million people on a bicycle. The further development of asphalt itself is also continuing.

The new 4.5 metre wide main cycle route on Croeselaan in Utrecht with a special (environmentally friendly) type of concrete surface.

What I have filmed now is asphalt of nearly 10 years old which stayed in a perfect shape, even where it is used on a cycle lane, rather than a separate cycleway. The experiments will need quite a bit more time to prove that the alternatives are just as good as the asphalt is now.

This week’s video, how well does asphalt age?

A ride to compare the state of the same cycleway in 2014 before and after reconstruction and in 2020.

10 comments on “What does red asphalt look like after many years of use?”

This entry was posted on 3 June 2020 by Bicycle Dutch in Original posts and tagged ’s-Hertogenbosch (Den Bosch), road surface.