Something I haven’t written much about yet is the unbundling or unravelling of modes. This is a way of separating cycle routes from main routes for motorised traffic. In the Netherlands it had been common practice to separate people cycling from motorised traffic on road level on all main roads from as early as the 1930s. In more recent years there has been a shift to separating these types of traffic even more: on route level.

A lot of roads for motorised traffic have been diverted to go around residential areas especially in the last 10 to 20 years in the Netherlands. Municipalities used the opportunity these diversions gave them, to downgrade the original roads so they became fast routes for cyclists. The old routes are usually more direct than the new diversions and those streets are also safer from a social point of view, because they go past or through residential areas where there are usually a lot of people.

I can show you an example of the unbundling of a cycle route in the South of ’s-Hertogenbosch that was (almost) completed recently. Vlijmenseweg is a road that formed the South ring road around the city. It was constructed in the 1930s and was interestingly enough at the time also a diversion from the earlier straight route that had become a residential street (see the green line on the 2012 map below). Right from the start, this main highway was built with separated cycle tracks. The concrete surface has served the entire lifetime of the road which was from 1936 to 2012, so it lasted for 76 years! 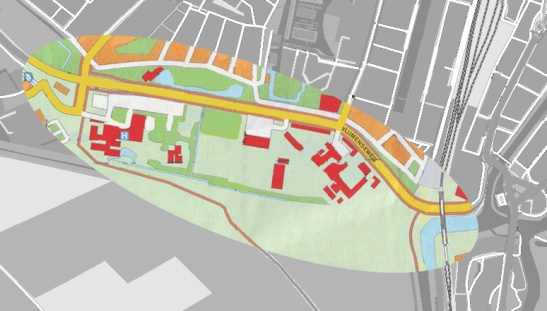 Map showing the situation around 2000 projected on today’s map. A main road with cycle tracks (in red) directly next to it. The old fashioned way of building main routes. That means that at every junction the different types of traffic cross eachother’s path. The canal in the bottom right does not align with the present situation because it was moved sideways to make room for the new South circular road in between the railway line and that canal.

The map from around 2000 shows the old situation. The thick yellow line running from West to East is Vlijmenseweg. A two lane road that became four lanes once it left the city. There were separated cycle tracks, 2 meters (6.5Ft) wide in each direction, directly next to it.

This map shows the 2012 situation. The cycle route and the route for motorised traffic have been unbundled completely. For cyclists there are now two East-West routes, one North and one South (the red lines). All the crossings are now multilevel which makes the crossings very safe. Notice how the pond was extended to the South: where the road used to go straight on there is now water, making the new cross roads more logical too. There are a lot more buildings in the area now, the new city hospital being the largest of those buildings. The green line represents the original Vlijmenseweg before the 1936 diversion.

On the 2012 map we see that the situation has completely changed. Motorised traffic that used Vlijmenseweg was diverted from about the centre of the picture to run even more South. The old 2 lane road is now white, meaning it is not an important through route anymore. There the cycle paths remained right next to it. From where the road was 4 lanes, a new route, the actual diversion, was constructed. The new part is also 4 lanes wide but comes without any cycle provisions.  That is because the new cycle route is a two way cycle path that runs to the North, on the edge of a residential area, sometimes several hundred metres away. Because the routes are now unbundled it means there are far less crossings. Where both routes do cross tunnels were built, so the crossings are now much safer than in the old situation. In addition to the North route an extra cycle route to the South of the new road for motorised traffic was built. So people cycling now have two options to cycle from East to West and vice versa. The North route has more social safety because it runs closer to a residential area with more people. But if you want to ride very fast the South route through the fields is perhaps the better option.

The picture below shows the North route facing West. The arrow with 1 on the 2012 maps shows the location where the picture was taken and the direction in which we look. On the right hand side the homes and on the left hand side a pond. Behind the pond and in front of the new city hospital the route for motorised vehicles is barely visible.

The new cycle route is separated from the main route for motorised traffic that can be seen to the far left behind the pond and in front of the new city’s hospital. Behind the trees to the right is a residential area facing the cycle route. This enhances the feeling of social safety.

The part of Vlijmenseweg that has now lost it’s function of main road has remained the way it was. A two lane road for motorised traffic with cycle paths directly next to it. Well perhaps not directly as there is at least one meter separation with a grass strip. The cycle path is 2 meters wide. In the mid-1930s England was also experimenting with cycle tracks like that. But somehow the British lost their interest and the Dutch did not. This road seems not to have changed since it’s construction in 1936, but that is not entirely true. The main flow of traffic has been diverted to a new 2×2 lane highway South of this location. Recently the surface was modernised. The old concrete was replaced with smooth asphalt (this was done after the picture was taken). Both pictures were taken from the location marked with a 2 on the 2012 map in the direction of the arrow.

Vlijmenseweg in July 2012. Little seems to have changed since 1936 but that is not entirely true. The main flow of traffic has been diverted to a new 2×2 lane highway South of this location. In October 2012 the road and the cycle tracks were resurfaced and the 76 year old concrete was replaced by black and red smooth asphalt respectively.

Video showing the reconstruction of part of the route. From a service street to a two way cycle path.

Video showing the entire North route of the unbundled cycle route. This is a continuation of the route shown in this earlier post.

Two students of Boston University cycled the South route which can be seen in their video.

Some points with regard to separating motorised traffic and cycling traffic on route level:

This entry was posted on 29 November 2012 by Bicycle Dutch in Original posts and tagged ’s-Hertogenbosch (Den Bosch), before and after, filtered permeability, history, infrastructure, unbundling.