Slender and stylish are probably the most fitting words to describe the cycle bridge at the edge of Enschede, a university city in the east of the Netherlands. The bridge to cross Auke Vleerstraat was opened in October 2011. I visited the bridge on a sunny and freezing day last November… only to find it was very foggy in Enschede. 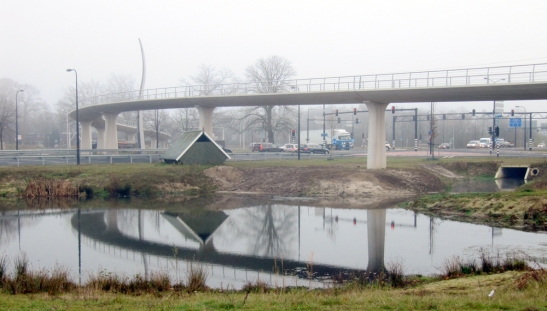 The bridge had become necessary after the road was doubled from 2 lanes to 4 lanes (2 in each direction). The waiting times at the lights for crossing cyclists were already so long in the old situation, that some people on bikes (especially some of the hundreds of school children that pass here every day) decided to jump red lights, which led to very dangerous situations. But the high number of cyclists on the other hand also caused unwanted delays for motor traffic. An at-grade junction after the road was doubled in size was therefore considered impossible. Note that in the before situation there was already perfect cycling infrastructure that would probably be very sufficient in any other country, but not here. If there had been fewer people on bicycles, the demand driven lights would be a perfect solution. But with the numbers that cross here, the other traffic would be stopped so often that it would cause congestion. That is why in the Dutch situation this type of infrastructure needed to be updated.

In 2009, the city articulated its wishes for the design of the reconstructed crossing as follows:

The before situation already had completely separated cycle paths, but by Dutch standards this at-grade crossing was not adequate any more. The road from left to right was actually only 2 lanes wide (outside the picture) but became 2×2 lanes. (Picture: Bing Maps)

Artist impression of the meander shaped bridge that would replace the old crossing.

To meet the city’s demands, the only fitting solution was a grade-separated crossing. So people on bicycles are completely separated in time and place from motor traffic. A cycle bridge was designed by Ipv Delft, who also designed the floating cycle roundabout in Eindhoven. This bridge is just as slender and white as that roundabout. The bridge was designed in a ‘meander’ shape, which has multiple advantages:

Ipv Delft designed a slender bridge of prefab concrete. The whitest type of concrete there is. Even though the meandering shape seems to be random, that is certainly not the case. All the curves could be made with only two different types of 20 metre long bridge parts. One type with a radius of 75 metres and one with a radius of 180 metres. That means all 14 parts could be made with only two different moulds. This decreased the costs, because moulds are rather expensive to make. The bridge parts were partially filled with EPS (expanded polystyrene) to minimise the amount of concrete and thus the weight. The total height of the parts could be kept at only 80 centimetres, enhancing the slender appearance and giving the city the desired open view into the country side. At night the bridge is lit from 260 lights in the railings.

All 14 bridge parts were placed in just one day to minimise the inconvenience of closed roads. 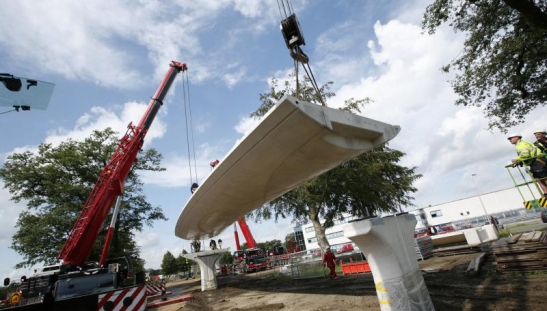 The total costs of this bridge were 2 million euros and it was financed by the European Union, Twente Region, the Ministry for Innovation and Enschede municipality.

A video to show what the Auke Vleerstraat Cycle Bridge in Enschede looks like. Filmed on a cold (-1C) and foggy November day. Note the very high number of lorries!

A ride on the bridge from Enschede into the country side.

I was able to finance this visit to Enschede with the help of your donations.

Incidently Enschede is a sister city to Palo Alto CA (USA) that has received a Bicycle Friendly Community status of “Gold” from the League of American Bicyclists.