Celebrations in Nijmegen last Thursday when it was announced the city had won the title of Cycling City of the Netherlands in 2016. Taking over from Zwolle, elected in 2014, Nijmegen may call itself Cycling City 2016 for two years. Which is very nice, because that means the co-host of next year’s Velocity 2017 conference will still be best Cycling City when that international cycling conference takes place.

The award is a sign to be put up somewhere in Nijmegen. On the stage, left to right, Peter van der Knaap (SWOV) chair of the jury; Saskia Kluit, director of the Cyclists’ Union; Harriet Tiemens, alderman of Nijmegen and George van der Woude, mobility manager of Nijmegen.

Quite a few people showed up on Nijmegen’s Grote Markt (Grand Market) where a number of companies presented itself. A great variety of bicycles were on display. It was sunny, there was music, a balloon artist made little bicycles for children out of balloons (!) and there was free ice cream for all.

On the day of the award ceremony Nijmegen was doing maintenance work on the city’s largest piece of cycling infrastructure: the Snelbinder cycle bridge over the river Waal.

A delegation of the Dutch Cyclists’ Union had come from Utrecht to Nijmegen, accompanied by the chair of the independent jury, to present the award to the alderman in the presence of the mayor of Nijmegen, in a very festive atmosphere.

It was striking how friendly the jury was, about all five competitors, in their report.

“The jury of the election Cycling City 2016 was impressed by all five nominated municipalities: each and every one they are municipalities where making effort in the past has led to a very good cycling climate today. They all show great ambitions for the future as well.

At the same time the jury noticed that the theme of this particular election – “Bikenomics”, cycling as an economic opportunity – had its challenging aspects for the participating municipalities. Maybe that is the case because the positive sides of good cycling policies are already being recognised for years: cycling is not only good for local businesses or the spending power of citizens, it also leads to a better accessibility, health benefits and a liveable city centre.”

No city is perfect and Nijmegen too knows a lot of building activities. To get to the award ceremony I had to cycle through these road works.

There were more friendly words for each contestant separately, but reading between the lines you could also find some well-hidden critiques.

About Maastricht the jury said: “Maastricht is a municipality that shows great enthusiasm in the transformation of the city to become a real cycling city. Opportunities are taken at the right time and the economic value of the bicycle is recognized. Lagging behind, with relatively much older infrastructure, the city takes big leaps forward.”

“In Groningen the jury found a lot of ambition (besides existing infrastructure) with an enthusiastic alderman who is – with his team – full of new plans. Groningen is aware”, the jury added, “that it is at risk of resting on its laurels after running far ahead of the troops. For that reason, plans have been made, already, to get to work, where necessary, on existing infrastructure”.

The jury report contains similar lines for Utrecht, but the jury’s views of Utrecht became a lot clearer on the stage in Nijmegen. Chair of the jury, Peter van der Knaap (in daily life he is director of SWOV; the Dutch road safety board), joked to the audience: “Utrecht is a fantastic cycling city, but, when we were there for our visit, it almost felt as if we had disturbed the bride getting into her gown.” The jury wasn’t pleased with the many building activities in Utrecht, apparently.

Finally a word about poor Goes, in the final for a second time. Goes didn’t get one negative word, not even hidden well. It seems Goes was simply considered too small to win the title as Cycling City, again… 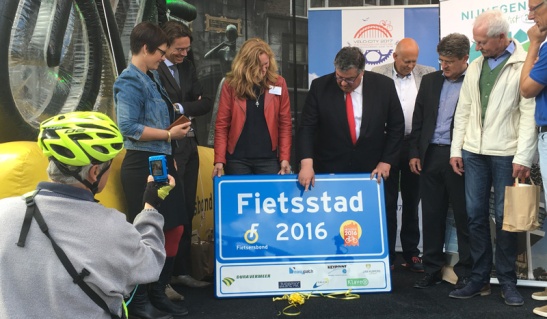 Representatives of former Cycling City Zwolle got on the stage to hand over the title in a symbolic way. The mayor of Nijmegen, mr Hubert Bruls, also came on stage to hold the award sign. He joked that it should be put up on the motorway entering the city, for all the motorists to see.

The full jury statement about the winner Nijmegen reads as follows:

“Nijmegen is a city that made a great impression with the high quality fast cycle routes, the enthusiasm of the entrepreneurs in the Dutch Bicycle Centre and the upcoming Velocity-congress and other events such as the Giro d’Italia. The jury sees a vision coming true, with large investments in ground-breaking projects. The municipality also has an eye for the ordinary cycling infrastructure and -it is the jury’s judgement- really puts ‘bikenomics’ into practice. For example, by getting more employees to cycle to the hospital, 15 million euro can be saved on a parking garage. Talk about benefits from an active cycling policy! Nijmegen has constructed ground-breaking parking facilities for the bicycle in recent years, both in the city centre and near the railway station. It is also the city of ‘connecting for the bicycle’: it is easy and pleasant to cycle from one part of the city to the other, on either side of the river, and from Nijmegen to the surrounding towns and villages.”

The other four contestants were quick to swallow their disappointment and representatives from one after the other congratulated the winner, followed by a statement.

Alderman Lot van Hooijdonk of Utrecht said: “Of course we feel it is a pity that Utrecht did not win the title. But that doesn’t change anything about our ambitions and our projects to make cycling in Utrecht nicer and more attractive, or about our determination to stimulate the cycling economy.”

The chair of the Groningen chapter of the Cyclists’ Union stated that she was disappointed, but also understood the verdict well: “Groningen’s plans are okay, it is now time to execute them. In the end people cycling should notice things in the streets and that is what the council should realise.”

Alderman John Aarts of Maastricht saw the verdict as an encouragement:  “The comments of the jury show we have done a lot for people cycling in recent times. But we aren’t there yet. That is why we will keep on investing in cycling.”

So in the end everybody had a chance to underline good intentions, but there is only one real winner of this honorary title: Nijmegen is “Fietsstad 2016”, Best Cycling City of the Netherlands. Congratulations Nijmegen!

My video about the announcement of Nijmegen becoming Cycling City 2016.
(Note: the date mentioned in the video is wrong; the event took place on 19th May last, not the 20th)

This entry was posted on 24 May 2016 by Bicycle Dutch in Original posts and tagged Cyclists' Union (Fietsersbond), Fietsstad, Nijmegen.