Cycling as the summer lingers on

Many people decided to go cycling on the last Sunday in September. The recreational routes were so crowded that I heard one woman exclaim: “it’s busier than on the National Cycling Day!” (an event from the past that became the Cycling Month years ago). The reason that so many people were on their bicycles was the exceptionally good cycling weather. It was 26.1 degrees in the south of the Netherlands: record-breaking for the 25th of September, already 4 days into autumn. The Summer of 2016 just doesn’t seem to end. September broke a range of weather records in the Netherlands. There’s no need to explain what caused that, but at least it isn’t cycling. So it is a very good thing that so many people decided to hop on their bikes, to enjoy – what could have been – the last summer day of 2016.

The cycleway in the Bossche Broek nature reserve with the ’s-Hertogenbosch cathedral in the background.

I haven’t shown you much recreational cycling recently, but, as the video will show, this Sunday afternoon almost all cycling was recreational. There is a wetlands area at just a stone’s throw from the ’s-Hertogenbosch cathedral. Nothing was ever built there, because people couldn’t build in a swamp before and now it has been designated a nature reserve. The long distance cycle route number 7 goes right through it and there are also a few numbered junctions. The reason why so many recreational cyclists passed my camera. A lot of elderly couples but also some younger ones and entire families riding their bicycles.

Many elderly couples were enjoying the unexpected beautiful day. To the far right one of the signs of the numbered junction network. 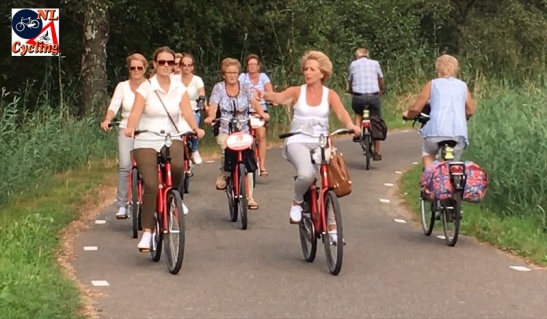 Some people cycled in larger groups. It is clear that these women all belong together, because they all cycle on an identical rental bicycle.

The recreational cycleways are wide enough to pass other people, even when both couples cycle side by side. 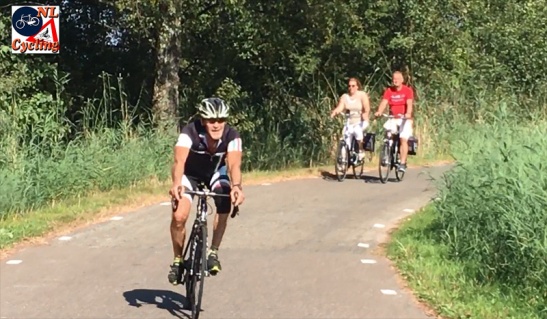 There were also some racing cyclists, but compared to all the other people cycling they only formed a small minority.

A lot of people cycled with their children. Sometimes these children had a seat on the bike of the parent. Note that quite some people in mobility scooters joined in the fun. 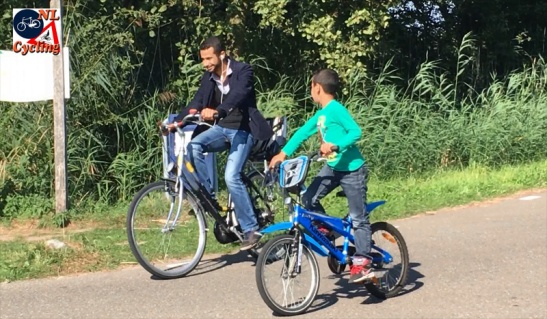 Other children already cycled themselves. 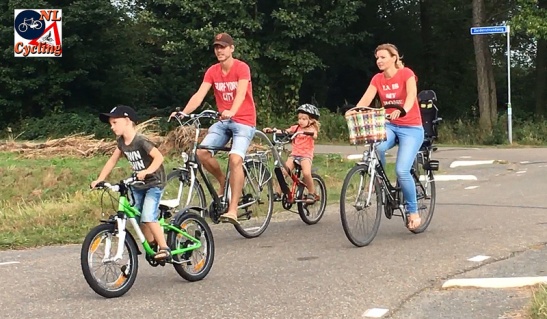 That trailer is still a bit too big for the little girl. It must be one of the first times she doesn’t sit in the seat at the back of her mother’s bicycle. Now that her older brother cycles on his own bicycle, she could move to his former place. That is the way things go in Dutch families when it comes to cycling. 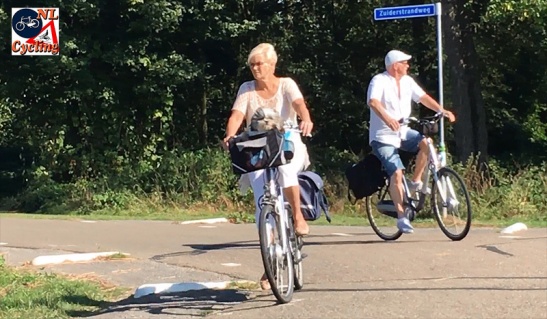 Cycling with a different type of friend: note that there is a dog in her front basket.

Two women on a tandem bicycle. I met these two women again, later in the afternoon. It was then confirmed that the one on the back of the tandem has visual limitations. It was also clear that thanks to her buddy she was able to fully enjoy the beautiful day with all her other senses on the back of that bicycle.

Some of the elderly couples were of the more sportive kind.

While this lady was truly dressed for a sunday.

Not all the riding couples were over 50… There were also much younger couples under way. 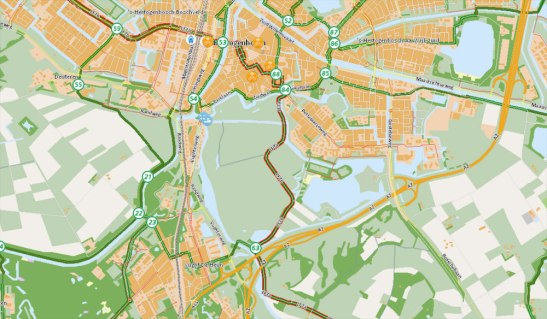 The triangular-shaped ‘s-Hertogenbosch city centre actually lies on the edge of the city. Just south of it we find the nature reserve: “Bossche Broek”, with a long distance cycle route right through it (The green/red line). This is where most of the video was shot.

Video: recreational cycling on a summer day in autumn.

4 comments on “Cycling as the summer lingers on”