The Barcelona Superblock of Poblenou

Where once traffic roared you can now hear the pleasant sound of children laughing and playing. The Superblock of Poblenou is a pilot project to show what the city of Barcelona will be like when the plans of the superblocks become a reality. The difference in sound and atmosphere between the streets inside the superblock and the traditional streets in the rest of the city is amazing. It should convince the sceptics that the city streets of the future should not be designed for motor traffic, but for people.

Late October 2017, relaxing on what used to be road space in the Superblock or Superilla del Poblenou.

I visited Barcelona late October to be part of an Urban Thinkers Campus (UTC) “focused on how to achieve more liveable cities, which are more sustainable, healthier and safer, through the implementation of new models of urban mobility.” The congress was organised by the Federación Iberoamericana de Urbanistas (FIU) and sponsored by the City Council of Barcelona and the World Urban Campaign (UN-HABITAT). I spoke in a session called “Disputant l’hegemonia cultural al Cotxe” (Contesting the cultural hegemony of the car). Not that the objective would be to get rid of the car completely, but its role in the cities of the future should be completely revised. This congress was not just about Barcelona, but having a living lab so close to the venue meant most delegates got to visit the Superilla del Poblenou as the name of the superblock is in Catalan. This superblock is showing us what cities can be like when you do not design first and foremost for the private car.

The Superblock model explained (From the Urban Mobility Plan of Barcelona 2013-2018).

The location of the Superilla del Poblenou (the 9 green squares) in the fabric of the urban design of Barcelona. The arrows indicate the driving directions for motor traffic. (Picture from the Urban Mobility Plan of Barcelona 2013-2018)

I must mention that this was an interesting time to visit Barcelona, the capital of Catalonia. There was a noticeable political tension, especially when all the delegates were invited to a reception at city hall, right opposite the parliament building. The plane from Eindhoven to Barcelona was practically empty and so were many restaurants on the boulevard on the Mediterranean Sea, meaning many tourists must have postponed their trip. But while there were a lot of people waving flags and you could see banners on buildings, it didn’t really feel unsafe. The moment that independence was declared, on Friday 27 October, I was already in a taxi to the airport for my flight back.

The typical 19th century street pattern design in the expansions (for instance in the one named Eixample) of Barcelona creates octagonal spaces on every corner of a block. These octagonal squares are almost as large as a traditional square in the older parts of the city. They must have had the same function in the past: a place for people to meet. This is exactly how the space is to be used again inside the superblocks.

The new functions inside the superblock of Poblenou in four categories. Public space, play zones, sport zones and urban renewal locations. (From the Urban Mobility Plan of Barcelona 2013-2018)

Barcelona is a city of 1.6 million people; totally different from any city in the Netherlands and yet there are similarities. The city wants to be more for people than for cars. Cars pose the same space issues to Barcelona as they do to any city, simply because cars are so terribly space inefficient. This universal problem leads to a universal search for solutions. Barcelona has a very specific street pattern. A straight street grid with the corner of every block ‘cut off’. This leads to octagonal spaces between the blocks that are as big as a town’s square. This grid was designed in the mid-19th century, before the car existed. These spaces between the blocks were meant as neighbourhood squares where people could meet each other. All that space is now used for motor vehicles, which means a staggering 85% of the city’s space is dedicated to the car.

A picture at the same location in the Carrer de Roc Boronat in October 2017, with the new design as an interiour street of a Superblock.

The city would like to bring back the original purpose of the city space by dedicating some of the octagonal intersections to people again. This is the core of the Superblock plan from the Urban Mobility Plan of Barcelona for 2013-2018. (in English PDF)

I see similarities to the superblock plan and what cities in the Netherlands are doing with parts of their urban areas. You introduce a hierarchy to the city streets. Some are for through traffic and some are only for residential traffic. Through traffic is forced to go around the areas where people live their lives. The difference being that the Dutch areas of the city around which motor traffic is led are much bigger than the superblocks are. With through traffic gone you have a lot less noise and pollution and there is a lot more space to give to people for active travel, recreation and other activities. 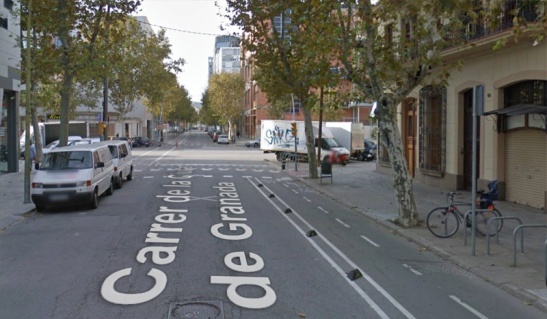 Google StreetView of the Carrer de la Ciutat de Granada as an ordinary street in 2016. Note the protected bike lane that used to be in this street.

The Carrer de la Ciutat de Granada after the redesign. Note that in a traffic calmed area with low volumes of motor traffic at low speeds a protected bike lane is no longer necessary.

This is how Barcelona describes the Superblocks in just a few sentences:

Through the Superblocks program, Barcelona is redesigning the city’s streets to limit traffic and increase the amount of green and recreational spaces available to citizens. The new program changes traditional city blocks into clusters of “superblocks,” where perimeter streets allow through traffic, but inner streets are reserved for pedestrians and cyclists. So far, the city has created Superblocks in four pilot neighborhoods, and by 2019, it expects the program will achieve CO2 emissions reductions of between 20% and 75%. The Superblocks program does not involve major physical changes, which allows for experimentation and reversibility. The project is part of a larger Urban Mobility Plan, a strategic measure of Barcelona’s Climate Commitment, expected to decrease traffic by 21% while extending car-free spaces by more than 23 hectares and adding 300 km of bike lanes. This measure will reduce CO2 emissions by 159,100 metric tons per year.

Already on the 11th October the little ones in the Superilla del Poblenou were really impatient to play in the children’s playground under construction. “Hurry up people” they seem to think. From the Twitter account of this Superblock.

From the four pilot superblocks I visited the Superilla del Poblenou. It was opened in September 2016. The first measures were cheap and would have been reversible: painted lines, plants in pots and simple seating. But from fall 2017 the city would be building more permanent features here, and I could clearly see that was happening. As you will also see in my video, two children’s playgrounds were almost finished. Indeed, last weekend the children finally got to play in these playgrounds for the very first time. That is really filling the streets with life, as the motto on the banners is “omplim de vida els carrers”, something that not everybody is convinced about. One opponent said the city area is deserted after 9pm and because there are no cars she feels socially unsafe. Apparently, she needs cars to feel safe in the street, an upside-down world view. Another spokesperson of a group opposing the superblocks claims a simple trip became much longer: from 900 metres it increased to 2,700 metres. The poor fellow… But if the superblocks make 900 metre car trips more difficult, forcing people to use alternatives, they serve a good purpose in my opinion.

On Friday 3rd November 2017 the festive opening took finally place. “The two new playgrounds of the Superilla del Poblenou – in the place where cars used to pass – so full, they’re overflowing!” From the Twitter account of this Superblock.

I think the Superilla del Poblenou already looks very attractive. I have spoken with residents who are very happy with it. They were so proud of their new neighbourhood that they invited a number of delegates into their homes to look at the revived city space from above. Other pilot projects have proven; the more permanent they become the more the resistance wears of. In response to a protest councillor Janet Sanz said: “we will continue to work on your goal, which is to make a more liveable city, the superblocks are the guarantee to having a more human city, traffic calmed and less polluted”.

My video about my trip to Barcelona and the Superblock of Poblenou in particular.

20 comments on “The Barcelona Superblock of Poblenou”