From traffic sewer to city park

People sitting in the grass of the Utrecht “Paardenveld” at a location that used to be an enormous intersection at the end of a motorway less than a decade ago. When I tweeted two pictures showing that huge contrast, it became my most seen tweet so far, with 364,537 views in the first week alone, well over one view for every Utrecht resident! Most people reacted positively amazed, but there were two locals claiming the pictures were not taken from the same position (which is false) and that the road was not at all gone (which is indeed true, but I never wrote it was completely gone). One of them called the pictures misleading, the other even called this “fake news” and “propaganda”. That, in turn, amazed me. How can you misunderstand these pictures so terribly, or forget so quickly? I don’t believe I will convince people like that whatever I show them, but it did give me the inspiration to explain those pictures in a blog post. Fortunately, this blog is nearing its ten-year anniversary. I have filmed the situation on Paardenveld in Utrecht every now and then from 2009 on. That means I can give you moving before-and-after images of this stunning urban transformation (video at the end of this post). I think you’ll agree that there’s nothing fake about it!

People enjoying a sunny day in May 2018. Until at least 2011 this very spot was the location of a gigantic intersection. The structure based on some old shipping containers is a -temporary- restaurant, with an outside café in front of it.

This Swedish glacier rock weighs 1,150kgs. It has the name Park Paardenveld cut into it.

There still is a road alongside the new city moat. But it is much smaller than it used to be and it has great cycling infrastructure running parallel to it. 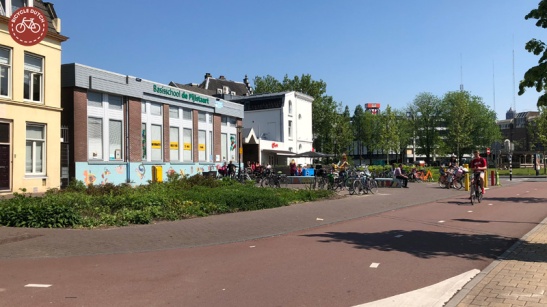 More reclaimed space. From the early 1970s to about 2012 this primary school was on a service street next to the main road. Now it is on a cycleway that is much further from the entrance. Children can run out of that front entrance in a much safer way. The current school building dates from 1990, it replaced a much older building, that you can see in the aerial picture of 1985. 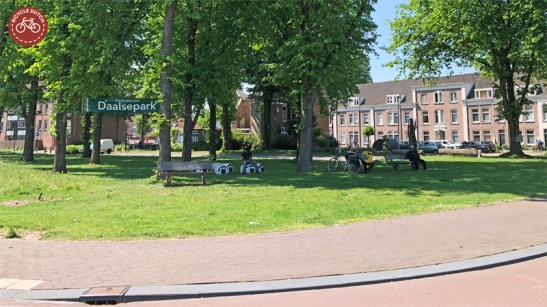 These trees were planted in the early 1970s in the then central reservation. They have become tall and with half of the road gone residents named this place “Daalsepark”. They would really like to keep this green the way it is, but the city of Utrecht had plans to get rid of the trees and use this expensive plot of land for dwellings. The future is still uncertain.

Paardenveld means “horses field” and it took its name from the horse market that was briefly moved to this north-west corner of the city in the sixteenth century. The horse market returned to its former location in 1580, but the name stuck, and the field was later used for a goods and produce market, which was held here until 1968. That year, the market had to make way for the huge urban intersection at the end of the motorway that was planned where the city moat was located. The intersection existed from about 1970 to 2012. At one location there were 9 traffic lanes next to each other. In general the traffic lanes were divided by huge central reservations that got a lot of trees. Since most were planted in the early 1970s they had grown to become considerable trees on a lot of grass. But although the area was very green, nobody in their right mind would sit right next to multiple lanes of fast-moving motor traffic.

Paardenveld in 1966, when the old city moat still existed. The open space at the right was a paved terrain used for the city’s goods and produce market. But when there was no market the place was clearly used as a parking lot. I marked some of the buildings with a red outline, so they can serve as a reference. They are visible in all three pictures, showing the three different appearances of this location. Picture Utrechts Archief 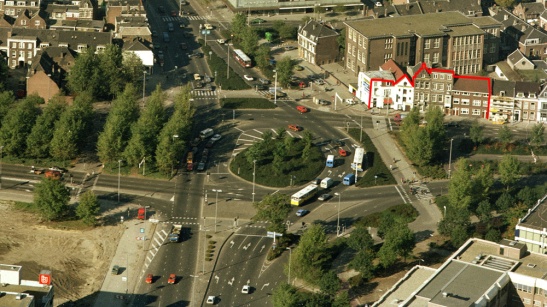 Paardenveld in 1985. Note the marked row of buildings The edge of the intersection came very close to them. The large taller building right behind this row was a primary school (incidentally the one where my grandmother went in 1913). That building has been replaced by a modern, much lower, building in 1990. All the buildings left of the marked row were demolished to make room for the intersection. The area was very green, but since most of the trees were planted on traffic islands, that green was not useable for recreation. If you look carefully you can count 9 motor traffic lanes in the foreground. Picture Utrechts Archief 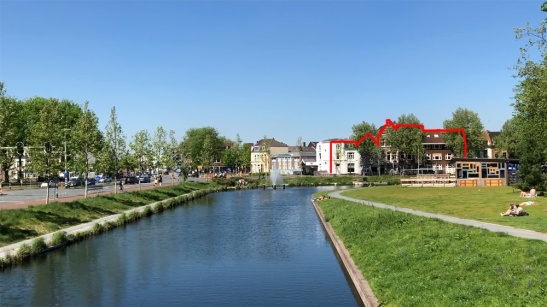 Paardenveld in 2018. The water came back late 2015. In the almost two and a half years since, the newly planted trees have really grown. The trees at the canal side to the left were all planted late 2015. Note how much further away that row of houses is again from the road straight ahead.

The three different stages of this location on a map. (Pictures Topotijdreis)

Utrecht has decided to dedicate less space to the car. I have shown you different examples, such as the inner ring road at ʼt Goylaan and a former through road at Tolsteegsingel/Maliesingel. This project is completely in line with these policies, but it started a lot earlier. The works to remove the motorway and recreate the disappeared city moat started in 2009 and in 2012 at this location. By December 2015, the motorway had been demolished and the water had returned. I already showed you that transformation in the first blog post of 2016, but in my new video I focus on this particular location. The street pattern at this location returned to how it was before 1968, so yes, there still is a road next to the new water. The new street has only one lane in each direction. Two much smaller T-junctions came in the place of the one huge intersection. At the T-junctions the one travel lane gets (mostly) two added turning lanes. At one location the opposite direction even has 2 travel lanes, making five lanes in total. Interestingly enough, those exact same 5 lanes were formerly used for just one direction, so even there, the total number of lanes decreased considerably. 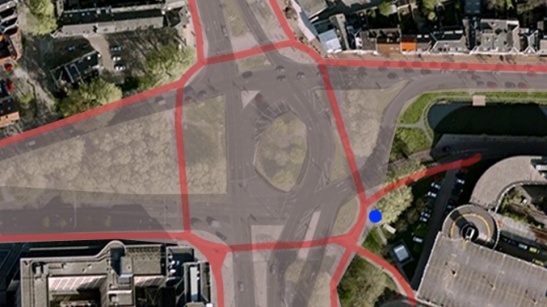 The footprint of the intersection that existed from about 1970 to 2012 was enormous. The huge traffic islands dividing the lanes in opposite directions rendered a large part of the city unusable for anything else but the flow of traffic. (Picture Google Maps from 2009 – no longer available on the internet, with my additions)

The footprint of the current two T-junctions and the streets is a lot smaller. Creating a lot of extra space for people. In the top left the (possibly temporary) Daalsepark (former central reservation). In the top centre a small new square in front of a primary school (possible after the road was narrowed) in the bottom right quarter the new city moat and all the green of Park Paardenveld (Picture Google Maps, update from 2018, with my additions) 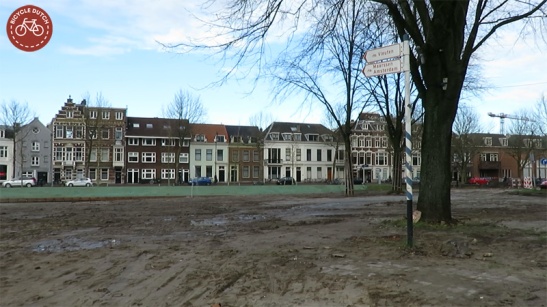 Late 2015 a directions sign for cycling was left, forgotten, at its original location. I marked this location on the previous two pictures with a blue dot. Which means the back of the restaurant is placed where the outer edge of the cycleway used to be. The front is on the edge of the former carriageway. This sign has since been removed, which is probably best, because it now pointed people directly into the new canal.

In the 1970s, of all the new trees, some had been planted in the location of the former and current water way. Obviously those trees had to be removed again. A lot of new but mature trees were planted to make up for these lost ones. Some trees were even relocated from other places in the city. In March 2017, three very large trees came from elsewhere in Utrecht. These 18-metre-tall lime trees had to make way for the new light-rail line to the University Campus and were fortunately fit for a relocation. The three trees weighed 12 metric tons each and they were transported by truck, horizontally. The lime trees got company in December 2017, when 5 dawn redwood trees came from yet another location in Utrecht. This transformed the blank canvas of early 2016 into a real city park. A rock from a Swedish glacier with the name “Park Paardenveld” had been unveiled on 31 March 2017, by the alderman for the reconstruction of the Utrecht Station area. That same day the fountain in the water was also switched on for the first time. Residents had asked for the fountain because they liked the temporary fountains for the opening festivities in December 2015 so much. Since April 2017, Park Paardenveld also has a much-loved –temporary– restaurant with an outside café in a reused standard shipping container.

Before: 2011. The cars drove close to the position from which I took this picture. 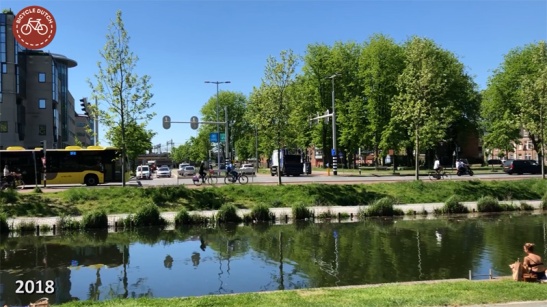 After: 2018 On this picture taken from almost the same location, the cars are far away in the distance. Especially the water makes them appear even more distant.

From 2012 to 2018 Paardenveld has been transformed from a place where the flow of motor traffic was the only design consideration, to a place where people really like to linger. You don’t have to believe me, you can also read what a local paper had to say. Headlined “Seven reasons why the new Paardenveld is more than fun”, they wrote among other things: “a lawn at the water front, a little something to eat, a drink to sip from and you can listen to the relaxing sound of the water fountain; the renewed park Paardenveld with its surroundings is a lot of fun.” 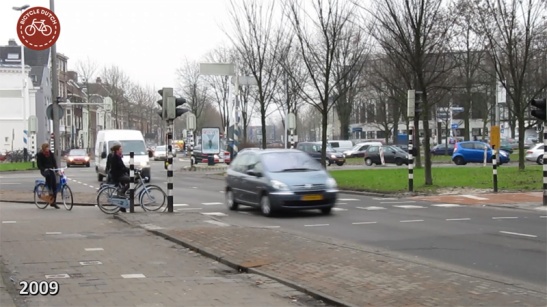 At this location, in the north-west corner, the road went straight-on (direction west) in the past.

Since this has become a T-junction, motor traffic wanting to drive west needs to go south first and then, about 60 metres south, it can travel west after all. The former central reservation has become Daalsepark.

My video explaining the transformation of the Utrecht Paardenveld.

My video with two bike rides, traversing Paardenveld in 2009 and 2018, side by side.

7 comments on “From traffic sewer to city park”

This entry was posted on 15 May 2018 by Bicycle Dutch in Original posts and tagged before and after, urban design, Utrecht.