When you design streets for people, not for machines

The Utrecht Maliebaan is a beautiful tree-lined avenue – over 60 metres wide – that was built almost 400 years ago as a sports track for a game that was also an ancestor of golf. A century ago, in the early 1920s, motor traffic was allowed to use the former sports track and soon after that decision it was forbidden for people cycling or walking to use that area. Now the car era is coming to an end in a lot of Dutch city centres the situation is going to change again. Motor traffic will be banned from the centre of the street. The space will be redesigned for walking and cycling. The Maliebaan will be a place where people will want to linger again.

Two mothers with their children waiting for the light to change to cross the central carriageway of the Utrecht Maliebaan.

Students in Utrecht complained that there was too little to do for them in the city when the University was opened in 1636. That is why a sports track was built for a game called Jeu de Mail, a predecessor of games like pall-mall, croquet and golf. This sports track was called Maliebaan. Malie after the game and baan simply means “track”. The game was very popular all over Europe. As such the Utrecht Maliebaan is a cousin to the London Pall Mall and Mall, the Palmaille in Hamburg, les allées du Mail in La Rochelle and even the Washington Mall. The track, just outside the fortified city and close to the city moat, was finished in 1637. It was 740 metres long and 4 rows of trees were planted on either side. A gate closed the track at both ends. Copies of the gate posts can again be found at the current beginning of the street. In the late 18th century the game went out of fashion but the Maliebaan remained a place for sports and leisure just outside the city. 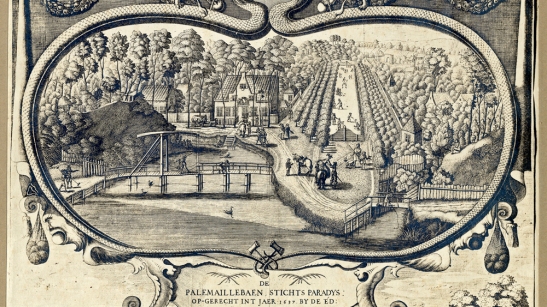 Detail of an engraving from 1645 showing the Utrecht ‘Palemaillebaen’ as a ‘Paradys’ (paradise) sports track. In the front the Utrecht city moat. Picture Utrechts Archief.

Some boys, two of which with their penny-farthings on the Utrecht Maliebaan in 1885. This must be just before the cycle track was opened between the trees right behind them in September that same year. Picture Utrechts Archief.

In the entire 19th century horse races took place regularly, but the street was mostly used as a place for a walk where you needed to be seen on Sundays. Later in the 19th century the street began to develop into a street for the rich who built some grand houses. This was at the time the city started to grow exponentially. In 1885 another sports track appeared on the Maliebaan. People had complained about new and dangerous machines appearing in the streets; penny-farthings and other high-wheelers of which the owners were racing around pedestrians. That is why the city, in an attempt to regulate this, constructed a race track for these high-wheelers. This had been at the request of the new Cyclists’ Union, ANWB, which had been founded in this very street two years before. The very first cycle track of the Netherlands was opened on 15 September 1885, and was in fact a converted walk way between two of the rows of trees west of the central track. In the mid-19th century one line of trees had already been removed to create the service streets on either side, so the new grand houses could be reached by horse drawn carriages. The street had been designed for leisure and recreation and it had had that function for almost three centuries. By the 1920s, however, this began to change when the street was redesigned to accommodate the then growing motor traffic. The central carriageway got an asphalt surface and was opened for through motor traffic. Apparently that drew so much traffic that soon after (and certainly before 1936) the central road was closed to cycling. The street was then that way for almost 100 years, but it is going to change dramatically very soon.

The Utrecht Maliebaan in 1936 about 15 years after the central area became a carriageway with an asphalt surface. In the 1920s cycling was still allowed there, but this picture clearly shows a sign that forbids cycling in the central part. I made the edge of the sign red (as it would have been) so you can see it even better. Picture Utrechts Archief.

Commemorative signs show where the very first cycle track of the Netherlands was located. It was opened on 15 September 1885.

Utrecht is a rapidly growing city, but the territory of the city is not expanding. That means more people will be using the same amount of space. This is why the city wants to give priority to traffic that takes up less space. Especially in the central parts of the city (where the Maliebaan is located) the role of the car is reduced and a lot of streets have been or will be reconstructed to reflect that new policy. I’ve already shown you posts about the nearby Maliesingel and Tolsteegsingel. For the Maliebaan there are several reasons for a reconstruction. The city wishes to:

One of the alternatives would keep the central roadway open to motor traffic and the intersection would become an oval ’roundabout’. This alternative was not chosen. Extra trees would have had to be cut. Picture Municipality Utrecht.

This intersection will be reconstructed. The lights will be removed and the crossing street will become a cycle street. On an average working day about 4,000 motor vehicles and well over 17,000 people cycling cross the Maliebaan here. Over four times as many people on bicycles than in cars.

From 2014 on, the city developed four alternatives to achieve these goals. The main challenge to tackle is the fact that traffic now runs in three locations; the central carriageway and two service streets. This makes the one big intersection with Nachtegaalstraat and Burgemeester Reigerstraat a very problematic one. At the last counts those two streets (which together cross the Maliebaan) carried a little over 4,000 motor vehicles and 18,133 and 17,254 people cycling respectively per 24 hours per working day. No wonder that the city has decided to turn those two streets into cycle streets where cycling has priority over motor traffic. That eliminates the need for traffic lights and the new design of the Maliebaan should take that into account. The city established there are four possible solutions:

The Utrecht Maliebaan stands out in the street pattern because it is so much wider, straighter and greener than any other street in the area. The city wants to preserve and protect this historic street much better in the future. Picture Google.

Remarkably there are a lot of (hidden) car parking spaces around the Maliebaan. Especially behind the grand houses, which for a large part have become office space. All that red dashed space is car parking space. Picture Municipality Utrecht.

Once the preference for a motor traffic free entire central carriageway was made public some of the residents complained. They feared that more (heavy) traffic on the service streets would mean more damage to their homes. They started a petition against the plan and created an alternative plan called Plan B. Around 2,100 people signed their petition, a quarter of which live on the Maliebaan. In Plan B the residents proposed to keep the central carriageway open to motor traffic, but in the form of a cycle street where cars are guest. To take these proposals seriously the city had the plan examined. The possible consequences of both the residents’ alternative Plan B and the preferred 3+ Plan of the municipal executive board were thoroughly compared by an independent consultancy. Especially one large political party in the city council, D66, the liberal democrats, with 10 seats, was sympathetic to the plan of the residents, so it was absolutely unsure whether the plan from the Mayor and the Executive Board would be approved in the council. The main conclusions of the additional investigation were that in both plans the motor traffic volumes would stay well within reasonable limits on the service streets but that a cycle street in the centre could not be created safely. This is due to the volumes of the various traffic types and the fact that the central roadway does not meet the recommendations of a cycle street (there are no end destinations and there is nothing to stop car drivers from speeding on this long straight stretch). This would lead to the fact that too many people cycling would choose to keep on cycling on the service streets and that the central carriageway would be a cycle street in name only. In reality it would be the present situation with more danger for the few people who would decide to cycle there. With this information the Mayor and the Executive Board decided that the interests of the city are better served with their own plan than with the alternative plan of the residents. The expected decreased traffic safety was the main reason for the liberal democrats to change their view and vote in favour of the city’s plan in the final council meeting of 2019 after all.

The new layout of the street. Picture Municipality Utrecht.

There will be an upgrade to the service streets. It is not yet known what that means. The remaining car traffic must use this space in future. The car parking on the left will most probably stay.

With 26 votes in favour and 16 against, the Utrecht city council adopted the preferred 3+ Plan of the Mayor and the Executive Board. The further details of the plans will now have to be designed. This will take the rest of 2020. When the plans are finalised at the end of the year, the actual reconstruction can then take place in the spring of 2021. This is around the same time that the reconstruction of the Nachtegaalstraat and the Burgemeester Reigerstraat is expected to also be finished. (Building activities there start in the first quarter of 2020 already.) Utrecht is thus taking one more step to further become a city where people walking and cycling get more space than people in motor traffic. Utrecht wants to be a city for people, not for machines.

My video about the Utrecht Maliebaan of which the central carriageway
will be closed to motor traffic and opened to people walking and cycling.

2 comments on “When you design streets for people, not for machines”

This entry was posted on 15 January 2020 by Bicycle Dutch in Original posts and tagged history, urban design, urban planning, Utrecht.