A new roundabout to replace a T-junction

Another new roundabout was opened in the municipality of ʼs-Hertogenbosch. This roundabout is located outside the built-up area close to ʼs-Hertogenbosch proper and business park De Vutter in the former village of Engelen. The three-arm roundabout was constructed in just under six weeks. It replaces a T-junction that was the site of a horrible incident involving two young girls who were severely injured when a truck crushed them while they crossed the main road on their bicycles, five years ago. 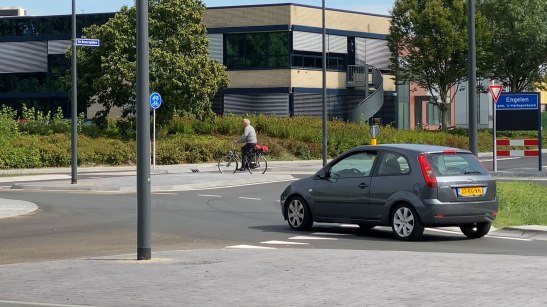 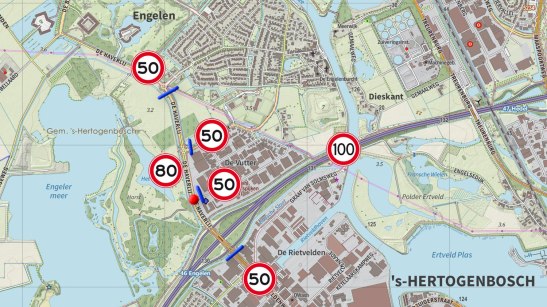 In the before situation the road connecting Engelen, north of the motorway A59 and ʼs-Hertogenbosch to the south of it was an 80 km/h road with the border between built-up area and countryside at every side street (blue lines). That meant that the speed changed at those borders and a lot of times in such a short stretch of road. The former 80km/h road is now a 50km/h road even though it is officially outside the built-up area. The red dot marks the location of the new roundabout.

The T-junction was a protected intersection. That means it had separated cycleways. It looked like a textbook example of a protected intersection. So what was wrong with it then, you may ask. The fact that this T-junction was so close to two built-up areas plays a major role. At the border between built-up areas and the countryside the default speed limit changes automatically from 50km/h to 80km/h in the Netherlands. In this case there was only 1km of ‘countryside’ between two built-up areas and motor vehicles also often came directly from the motorway with a higher speed limit yet. Drivers were inclined to speed with that motorway speed still very much in their system. There were no traffic lights at this intersection and there were two lanes for motor traffic on the main road. With two business parks close by there are always a lot of trucks underway. That can easily lead to masking issues. Meaning a truck in the turning lane can block the view of the lane for traffic going straight-on. If you then intend to cross that lane a vehicle at a higher speed can very much surprise you. 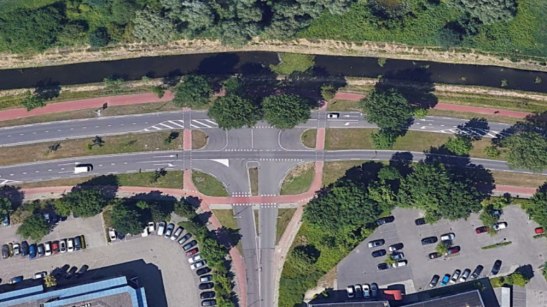 The replaced T-junction was a text book example of a protected intersection. It still wasn’t safe enough with the multiple lanes, large vehicles blocking the view on other lanes and the relatively high speeds. Traffic signals were not a good solution given the volumes of traffic. 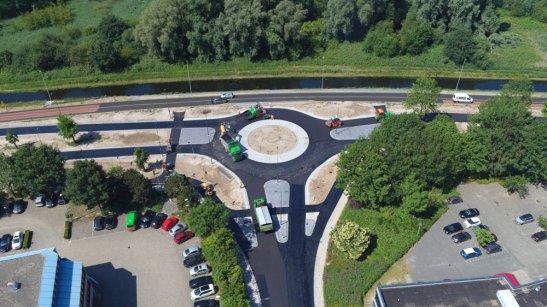 The roundabout under construction. The temporary bypass in the top of the picture became cycleway again. This is clearly a roundabout outside the built-up area. The cycleways are not circular but straight and at a greater distance from the circle. That indicates that cycling does not have priority here. Photo courtesy of the contractor building the roundabout.

In 2015, two girls, aged 14 and 15, crossed the major road and they were crushed under a passing truck. They both suffered life threatening injuries but did survive in the end, fortunately. The driver of the truck was later acquitted of guilt after the crash was thoroughly studied. The study even involved 3D modelling of the entire intersection and all available camera images in the entire area were checked. No technical flaws were found. This could have resulted in a status quo, but that is not what happened. Residents of Engelen had asked for a lower speed-limit, even years before the crash, but the council had never wanted to do that. The road has a rural look and feel they argued, it cannot have a speed limit belonging a street in the built-up area. Two years after the crash the press announced that the speed-limit was to be lowered to 70km/h, but that wasn’t true. That could not be legally done. Lowering the speed even further was completely out of the question. A 50km/h speed limit is not credible on a 4-lane arterial road outside the built-up area. Speed limits must be self-enforcing in the Netherlands after all. 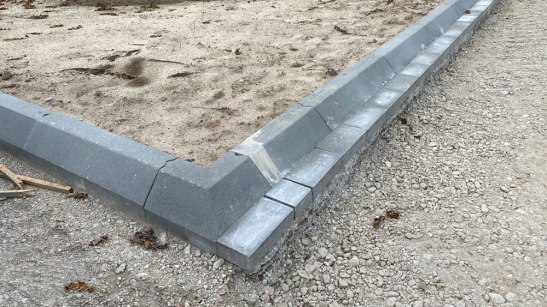 Three stages of the building process. First the kerbs (curbs) are placed on the road’s foundation. The gutter stones are kept in place with cement. 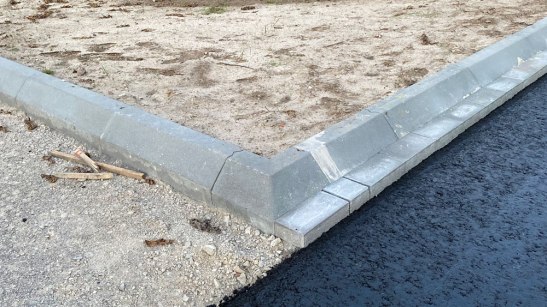 Then the first layer of asphalt is rolled out. You can see that the top is not yet flush with the gutter stones. 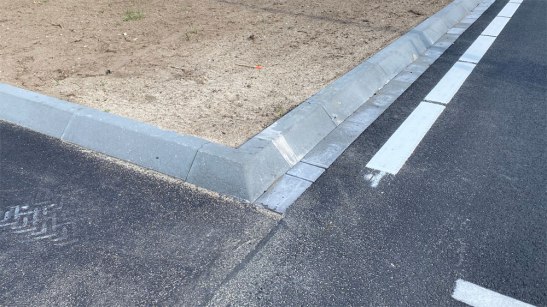 After the final layer of asphalt is laid everything is perfectly flush. The lines on the surface have also been placed. No red asphalt here, that would indicate cycling has priority and that is not the case.

That didn’t stop the comments and in 2018 the village council of Engelen was happy to note that the ʼs-Hertogenbosch council had budgeted money for the reconstruction of the T-junction into a roundabout. A roundabout really decreases the speed of motor traffic since they are designed for a passing speed of 30km/h. This is also not the first roundabout in this road, the next intersection already was a roundabout. Both are now connected by a road with single lanes and that did make it possible to lower the speed to 50km/h. Especially since the municipality had learned that the average speed of all vehicles was 55km/h when they had this investigated. This was even with the speed limit still at 80km/h. The look and feel is now really different and drivers hardly have the possibility to speed anymore. Although people had asked for it, the border of the built-up area was not relocated. That means the roundabout is located outside the built-up area and that has consequences for the priority arrangements. The local chapter of the Cyclists’ Union was not happy with that fact because this has now become a roundabout without priority for cycling. They argued that in the before situation cyclists going straight-on had priority over traffic that turned into the business park. Cyclists now lost that priority and the Union argued that this was a bad thing. While that is a fact, I think losing that priority is a small price to pay, shared with drivers going straight-on. They too lost their priority due to this new roundabout. I do not always agree with everything the local chapters of the Cyclists’ Union say. Now that motor traffic goes slower and everyone has to give all traffic on the roundabout priority the overall situation has become a lot safer in my opinion. 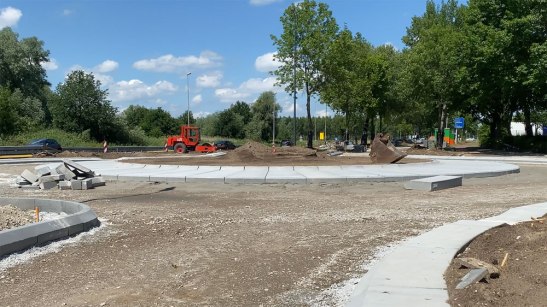 The roundabout in an early stage. With all the pre-fabricated elements this could almost be seen like a giant Lego structure. 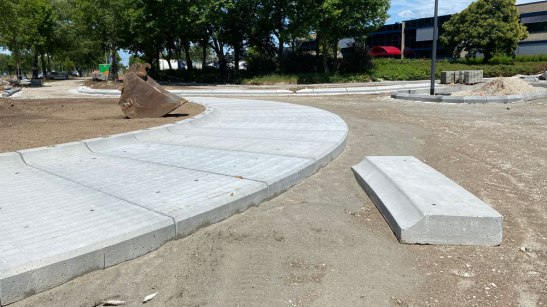 The pre-fab elements for the centre circle create the perfect radius. The elements are strong enough to also serve as an apron for heavy trucks to drive over. Right: one of the kerb stones of the road. Also strong enough to withstand trucks driving over them. 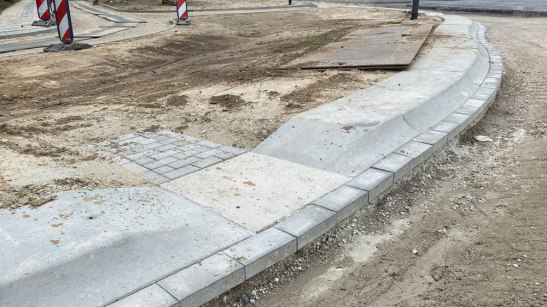 Clean rainwater doesn’t all flow into the sewer here. Instead it is collected to slowly enter the soil at this location. Several collection points like this one were constructed on this roundabout. We have to make sure that more water stays in nature with the increasing droughts. Goes a little bit against Dutch nature (since we always had too much water in the past) but you do see this more and more.

The actual reconstruction happened in a little under six weeks in the period from 25 May to 3 July 2020. This was earlier than expected thanks to the quieter roads due to the Corona pandemic. Dutch constructors can build roundabouts relatively quickly because they have a lot of experience and they have the benefit of pre-fabricated elements, even for the central circle. The contractor documented the progress on a website. Motor vehicles were diverted past the intersection on the west cycleway that was temporarily widened. Nice to see that the foundation of that cycleway was strong enough for even trucks. People walking and cycling were temporarily diverted on the side walk on the east side. That side walk was narrower than 1.5 metres which meant people could not pass each other under the current obligations to stay at least 1.5 metres away from other people. After many complaints after the first day of the detour traffic wardens made sure that people only used the detour in alternating directions the following day and the entire building period. The wardens at either end informed each other when nobody was approaching from their end. It is unfortunate that 9 larger trees had to be cut for this new roundabout. They will be replaced by 18 new trees but those new trees will need time to be a genuine replacement. 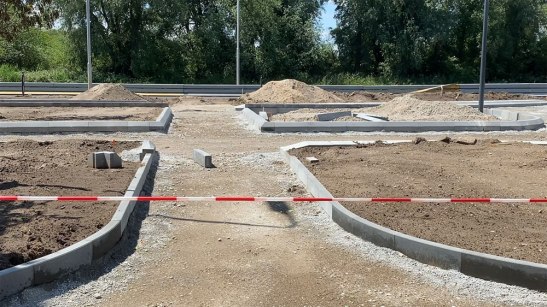 Just with all the kerbs in place you already get a perfect idea of what everything will look like in the end. Note that there are standard kerb stones for every type of corner. 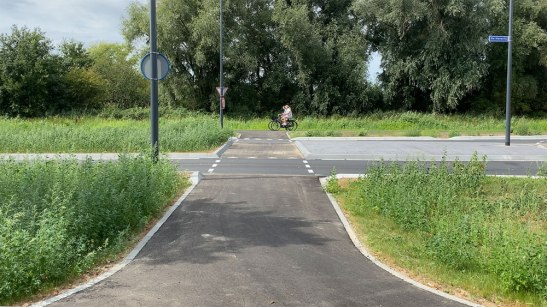 Just a couple of weeks after the roundabout was finished the grasses have already returned. This is a clear cycle crossing without priority. You only have to cross one lane at the time and there is a safe place in between the lanes. This crossing is only in one direction, from the distance into this direction, that is why there are no shark’s teeth on this side.

Now that the roundabout is finished some people complain that they have to cycle further. That seems like an illusion when you compare the before and after situation. It is true that people cycling north have to make a few extra turns, but that nudges you to look in the direction of where motor traffic may come from, which is a good thing in my book. All in all I find this reconstruction really positive. 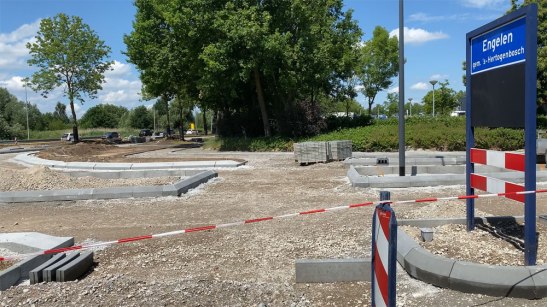 Another example of a cycle crossing. Note that there are no kerbs between future cycleway and footpath. 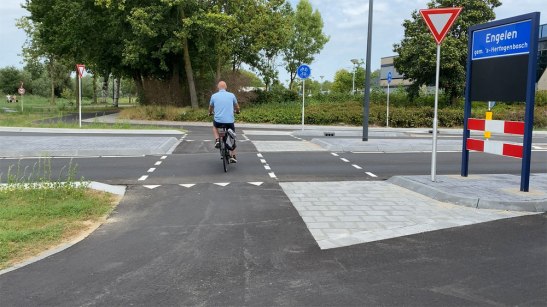 The cycleway has a surface of asphalt and the footpath has concrete tiles. Apparently it isn’t always necessary to have a kerb between the two. That cycling does not have priority here is clear from the yield sign, the shark’s teeth, the dashed lines and the black asphalt. (A priority crossing would have block markings and continuous red asphalt.) Pedestrians crossing here must also wait for a gap in traffic.

This week’s video: a new roundabout in Engelen.

7 comments on “A new roundabout to replace a T-junction”

This entry was posted on 26 August 2020 by Bicycle Dutch in Original posts and tagged ’s-Hertogenbosch (Den Bosch), roundabout.