A fast cycle route under development

A new part of a fast cycle route was finished in the ever expanding network of fast cycle routes in the province of North-Brabant. The cycle routes are primarily built to offer people an alternative to driving to work but they are also often used by schoolchildren and for recreation. For this post I looked at the F261 from Tilburg north to Waalwijk. The section I focus on today is the most northern part, from Kaatsheuvel to Waalwijk. 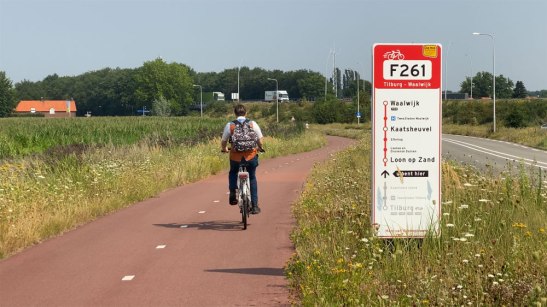 Just before the F261 route reaches Loon op Zand the cycle route looks like any “ordinary” cycleway in the Netherlands. The sign is very special though. In metro style it tells people where they are, where they came from and where they are going. 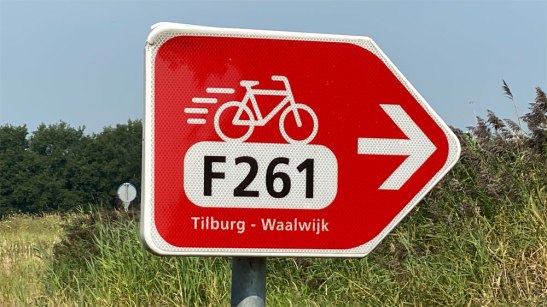 The signs with the route number and the beginning and end destination are very clear and very helpful to find your way. 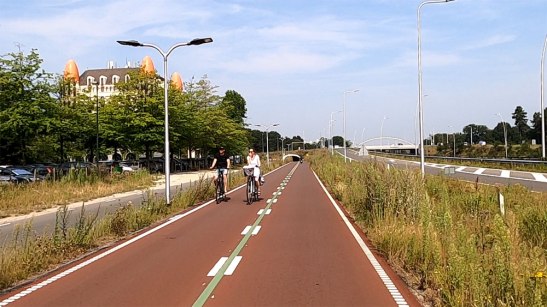 This part of the F261 runs directly parallel to the N261 road and was uncomfortably noisy. On the left the Efteling family park hotel.

In a short time period I stumbled upon two news items about this route, one good and one bad, both taking place on 6 June 2019. That afternoon an important underpass in the developing F261 was opened in Kaatsheuvel (in the municipality of Loon of Zand). This meant an end to the level crossing that needed to be used by a lot of schoolchildren with the entrance road to the parking lot of one of the country’s main family amusement parks, the Efteling. This famous park is twice as large as the original Disneyland park in California and predates it by three years. It is the third most visited theme park in Europe, behind Disneyland Paris and Europa-Park in Germany, attracting more than 5 million visitors per year. This high number of visitors causes a lot of traffic. To festively open the underpass, the alderman for traffic, Gerard Bruijniks, handed out free ice cream to the first 100 people cycling through the new underpass. It was no coincidence that the opening took place at a time that school children cycled home from school. 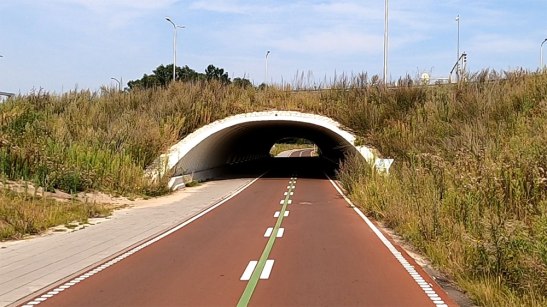 The underpass in Kaatsheuvel (opened June 2019) makes it possible to cross the road without any interaction with the traffic going to the family park the Efteling. 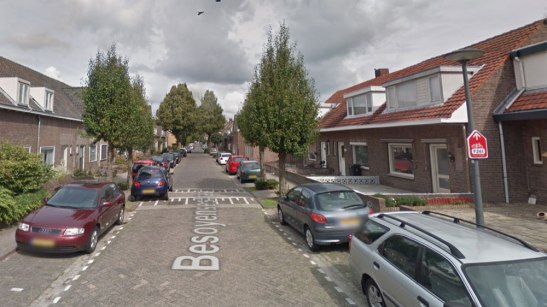 The route was supposed to go through this residential street as a cycle street. The sign was already put up, but the residents fought the “dangerous fast cycle route” and won. The council of Waalwijk cut the route short in June 2019. (Picture Google Streetview)

The other news fact was much less positive. In Waalwijk, at the end of the route, on the night of that same day, 6 June 2019, the council decided to shorten the cycle route considerably. This decision was taken after very fierce opposition from residents in Waalwijk. The F261 would be routed through a residential street (Besoyensestraat) as the most logical route to an existing cycle viaduct over the A59 motorway directly north of it. The street would become a cycle street to reach the industrial area of Waalwijk where a lot of people work. This fast cycle route was after all meant to give people a viable alternative to reach their work places. It has happened before in Brabant that the name “fast cycle route“ rubbed people the wrong way. The F59 would run through Geffen as a cycle street, but was not yet built because the residents feared the “fast cyclists” would be more dangerous to their children than the car traffic already using the streets. Also here in Waalwijk the residents were furious about the plan. They claimed their busy street with the existing traffic, the many parked cars and side streets would become too dangerous when “fast cyclists” would be added in the mix. Only one political party wanted to stick to the agreement with the province to build a route all the way to the industrial area, all the other parties sided with the residents. They reasoned that the route wasn’t worth the social unrest or the investments because there are more than enough existing routes to reach the industrial area by bicycle. Strangely enough the local chapter of the Cyclists’ Union did not fight for the route either, on the contrary! A spokesperson stated that a detour around the residential area should be chosen: “That may be a few hundreds meters longer, but for a cyclist in a nice flow that makes no difference. A fast cycle route is used by people cycling longer distances. When you cycle from Tilburg to Waalwijk those few hundred meters are nothing. Such people rather cycle a few hundred meters more than having to cycle with their hands on the brakes in a residential area”. 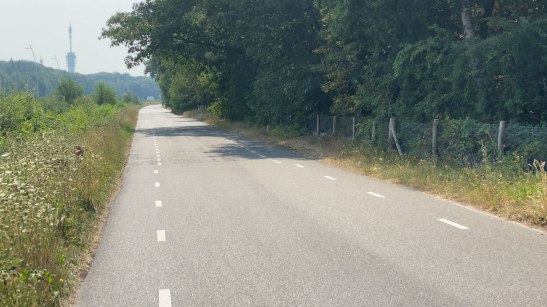 The route from Tilburg to Loon op Zand does not at all look like a fast cycle route yet. The route is supposed to be finished before 2021 but this was in July 2020 and there is still a huge difference necessary here… 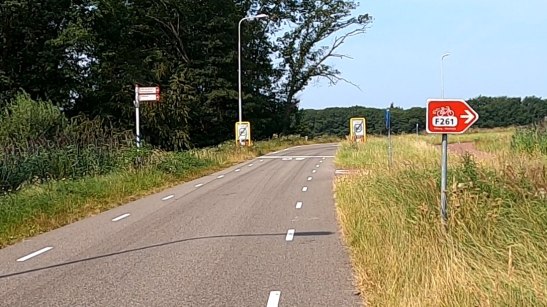 South of Loon op Zand. The difference in visibility between the old (left) and new experimental signs (right) is clear. You can see the new signs better and sooner.

I really wonder what type of cyclists this spokesperson was thinking of. This would more describe the racing type riding the entire route than the school child or the employee in normal clothes getting to work on just a part of the route. It is very clear that we need a new term in the Netherlands for this type of cycle routes, when even the local chapters of the Cyclists’ Union don’t seem to understand what a “fast cycle route” is for. The province of Gelderland chose the word ‘path’ (Rijnwaalpad, Maaswaalpad) in their names and seems to have fewer problems with residents or with people who are disappointed because they were expecting all crossings to be multilevel. Words are very important. That ice cream was specifically given to school children using the same route in Kaatsheuvel the very same day this unfortunate decision was taken only underlines that cycling is understood and treated very differently in the many different municipalities in the Netherlands. 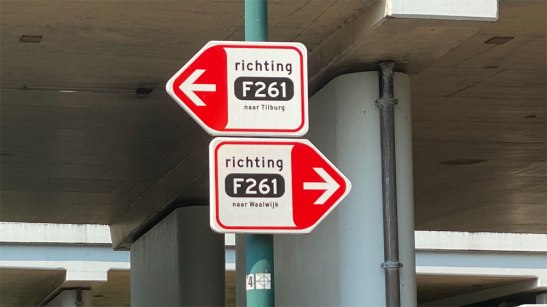 In all the side-streets it is very clear that you are reaching the F261 and also which direction will take you to which end of the route. This is very helpful and clear signage. 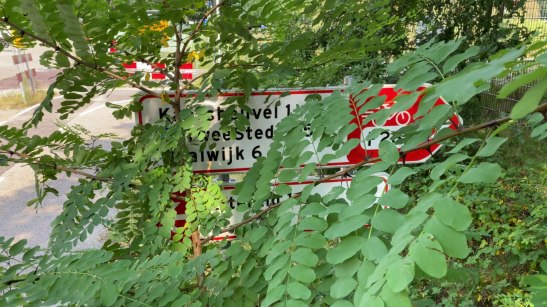 The new signage at eye level (much lower to the ground) does have disadvantages as well. Plants cover the signs easier.

The entire (shortened) F261 is supposed to be finished by the end of 2020. That is why I decided to have a look this summer. I doubt that will be the case. In the south of the municipality of Loon of Zand I found a road with no cycling infrastructure at all yet and cycle paths that clearly need an update. One thing was already taken care of and that is the special signage on this route. This new type of signage was tested in a living lab in Tilburg in 2018. (I wrote about that project at the time.) The F261 is the first cycle route to get this experimental signage all along the route and I must say it does help a lot to find your way. The new signs were highly appreciated and the test results of this wayfinding investigation were published (in English) in the Journal of Transport Geography of Science Direct.

The highlights of the investigation: 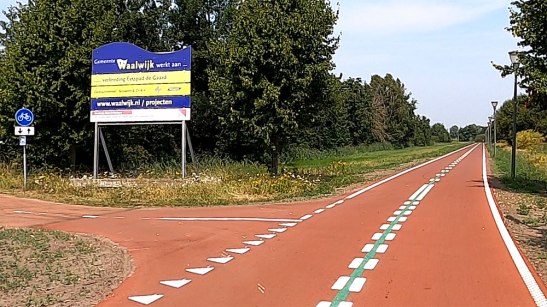 The municipality of Waalwijk built a great new cycleway as part of the F261. It is a pity they also cut the route short. 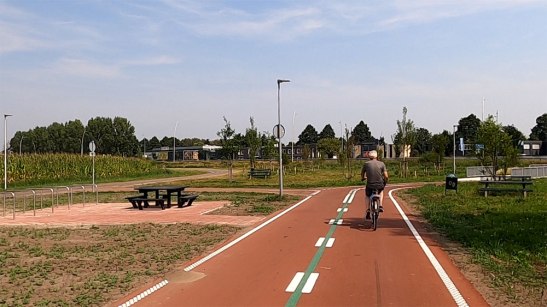 Along the route some resting points are planned. This one at the (new) Waalwijk end was already built.

I will continue to follow the further development of the F261. From news items I believe the part in Tilburg is indeed finished. I saw markings on the surface on the part in Loon op Zand that needs to be updated. Markings on the road are always a sign that change is on its way: I have written about this before. Early next year I will have a further look. In this week’s video I focus on the part that I found finished this summer and on what the new signage looks like. In my ride this coming Monday I will show you the part from Kaatsheuvel to Waalwijk in full. That video will also show how it connects to the F59 from Waalwijk to ‘s-Hertogenbosch (because I needed to cycle back home anyway). 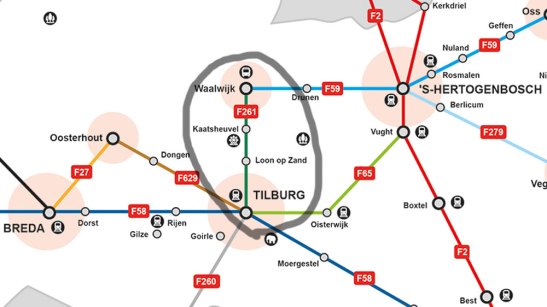 The F261 as part of the developing network of fast cycle routes in the province of Brabant. The larger residential areas are well connected to the work places and smaller residential areas. This makes the routes meaningful for a lot of people. 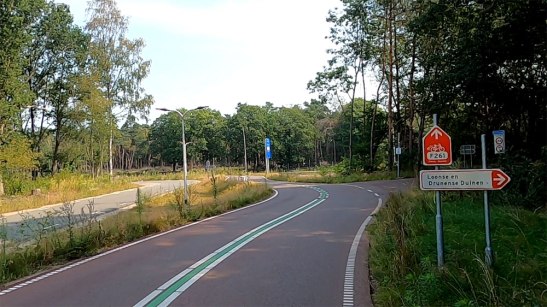 The green centre line helps to find your way as well. The tactile lines on the edge are supposed to prevent that people get off the track. I really like those!

5 comments on “A fast cycle route under development”

This entry was posted on 14 October 2020 by Bicycle Dutch in Original posts and tagged long distance cycle paths, NL is not perfect, Tilburg, Waalwijk.