A Bicycle Roundabout in Boxtel

The town of Boxtel has a most peculiar piece of infrastructure; a bicycle roundabout. It is silly, mainly because it is never a good idea to treat people cycling like mini-cars. This piece of infrastructure entices people to break the rules. Because when you turn left going against traffic is so much more convenient than following the mandatory riding direction around this roundabout. All but one of the people I saw going left went against traffic. The one person who didn’t was laughed at, by his own wife most likely! Going against traffic is potentially dangerous and yet the roundabout was built to improve cycling safety. Can we find out why?

The bicycle roundabout in Boxtel. People who went straight-on did follow the mandatory riding direction, as do the ones going right. It’s the left-turns that are problematic.

The bicycle roundabout in Boxtel turns out to be but a small part of an elaborate reconstruction plan. The municipality of Boxtel combined several goals and policies to improve livability in a good part of the town.

In none of the different proposals there was a bicycle roundabout. This is the “variant” that was chosen and at the right hand side we can see the two bidirectional cycleways (red lines) make a normal four-arm crossroads. (Picture municipality of Boxtel)

Boxtel has a cycle policy, it dates from 2010 and goes by the name of “Boxtel Bicycle 2010 – 2020” (That’s right, in English, I don’t understand either.) The aim: increasing cycling by 4% in the period from 2010 to 2020. That may sound like a very modest goal, but it would take the modal share of cycling for in-town trips from 39% to 43%. The latter would be in line with towns of a similar size, such as Culemborg and Raalte. It is quite difficult to increase a modal share when it is already as high as 39%. You would have to build really impressive infrastructure to persuade people to take up cycling who do not already belong to the early adaptors.

In this preliminary design of 2015 the crossroads have ‘suddenly’ become a roundabout. (Picture municipality of Boxtel)

Boxtel needed to renew a main sewer system in a street that could be a key street in a new main cycle route. In line with the cycling policy the town decided to combine the cycle ambitions and this sewer renewal. If the street was to be opened anyway why not reconstruct it completely? The street was also the location of one of the town’s black spots. A site with a high number of traffic incidents, that could be dealt with at the same time. Then there is a primary school that could do with a safer route to reach it. A good cycle route here would connect new neighbourhoods much further away too. Finally, the green zone was a bit tired, the park could do with a refreshing update.

The roundabout in the final design. (Picture municipality of Boxtel) 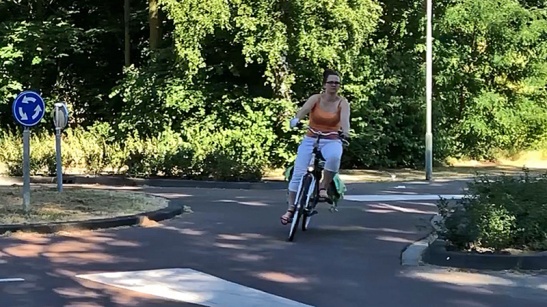 While I filmed here, all but one of the people making a left turn did it like this: going against traffic.

In 2014, the council started an elaborate process to tackle all these projects in one big reconstruction plan. The residents and other stakeholders were invited to take part in the decision process from a very early stage. The council’s ideas were presented in two community meetings in June 2014, where the town’s objects were explained together with possible solutions. The residents could have their say, these nights, and later via social media as well. Their remarks were indeed considered. How exactly was explained in another community meeting in December 2014. Again, the stakeholders had the opportunity to comment on that presentation. The plans were after all quite elaborate, even involving completely closing a street to motor traffic. The reactions to the accumulated remarks were processed and the council presented a preliminary design in July 2015. Remarks about this design were again taken into account and that led to a final design, presented in September 2015. The changes of the Traffic Order were announced in February 2016. The reconstruction took place in the summer of 2016 and by the autumn of 2016 everything was finished.

The roundabout as I found it in July 2018, nearly two years after it was constructed.

On its website the council proudly summarizes this project as follows: “Planning a street’s reconstruction should be done together. That too is how Boxtel cooperates!”

However, right after the project was finished people started to complain, especially about the closing of the street. The council reacted bitterly:

“We took this decision together. The residents who did participate in the planning process and the council. […] What some people now put on social media beggars belief. It is a shame those people only chose to come forward now. We would have loved to hear from them in all the public meetings.”

Some pictures from one of the public meetings in June 2014. People discussing the initial ideas from the municipality. (Pictures municipality of Boxtel)

All in all, I think the reconstruction can be called a success. There is a separate protected bidirectional cycle path where there were on-street cycle lanes before. Traffic volumes have been reduced in the area by completely closing one street to motor traffic. There is now a safe cycle route to the school. And the neighbourhoods further away can use the new and safe cycle route as well. The green zone looks very attractive. Many points brought up by the residents made it into the final plan. A wider footpath here, an extra parking place for people with disabilities there. Everything is clearly explained, but in all the paperwork one thing is not explained at all. Why that bicycle roundabout? The new cycle route did lead to a new crossing of two cycleways. A four-arm crossroads of two bidirectional cycleways may have been novel in Boxtel, they do exist in other places. Such an ordinary crossroads can handle a large volume of cycling. I’ve shown you an example in Utrecht that can handle thousands of people a day, several hundred in the morning rush hour alone. A roundabout in a small town with much lower cycle volumes is over-engineering to say the least. The roundabout was not part of the initial alternatives. It just pops up in the preliminary plan. I don’t see any mention of people questioning it, nor do I see an explanation of why it was deemed necessary. The council simply states: “We are going to build a cycle roundabout”. It almost seems it was meant to make the new route stand out. A landmark, Boxtel’s equivalent of the Eindhoven Hovenring, perhaps? The official announcement of the Traffic Order of February 2016 confirms the roundabout is going to be built:

“7. By placing D1 traffic signs of the Traffic Regulations and by placing road markings on the centre island of the to be constructed roundabout where the cycleways of Dr. de Brouwerlaan and Maastrichtsestraat intersect, we instate a mandatory riding direction on the roundabout.”

A girl on the roundabout. It may very well be that the nearby school and the school children that need to cycle here because of that school were the reason to want to make this crossing “extra safe.”

Was it the desire to make the crossing safer for the school children going to the nearby school? The public sources do not make that clear. I doubt that is what the roundabout achieves. On the contrary, I think it makes the crossing less safe, now that so many people ride against traffic. But who can blame them? On the other hand, it can’t be too dangerous though. I was able to find just one traffic incident reported (on Facebook). This report doesn’t have many details, but apparently that crash didn’t lead to much harm. On their page the Community Board Boxtel-East wrote:

“13 January 2017. The first crash on the cycle roundabout in Boxtel-East has now taken place, fortunately without severe injuries. Such a shame that taxpayers’ money has been squandered this way. It took a lot of money to create an unsafe situation. You really don’t need a college education to see that. Disgraceful.” 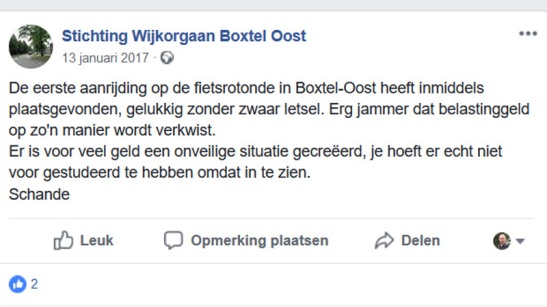 The only report I found of a crash on the roundabout. (Translation in the blog text.)

I agree that it was not a good decision to build the bicycle roundabout in Boxtel. A shame, because Boxtel does do good things for cycling. Errors are made, in this country too of course. The Dutch can’t do everything right. That can lead to silly roundabouts. We had one in Sint Michielsgestel, there seem to be examples in Leiden and Delft too and this is yet another one. One can only hope there won’t be more!

The Bicycle Roundabout in Boxtel.

13 comments on “A Bicycle Roundabout in Boxtel”

This entry was posted on 24 July 2018 by Bicycle Dutch in Original posts and tagged Boxtel, exceptional cycling infrastructure, NL is not perfect, roundabout.